Collages and Cuttings from an Unusual Breviary

The Schoenberg Institute at the Kislak Center at the University of Pennsylvania is the only institution, as far as I'm aware, that regularly introduces its medieval manuscripts by way of YouTube videos; there are now more than 70 (including non-western MSS). I only recently became aware that one of these videos concerns not a codex, but two collages of cuttings, perhaps assembled in the 19th century, one of which is shown above.

This caught my attention because I had also recently been looking at other fragments from the same manuscript.

Before we get to them, here are the Penn collages in more detail. Each consists of a central square made up of nine cuttings, three-by-three: 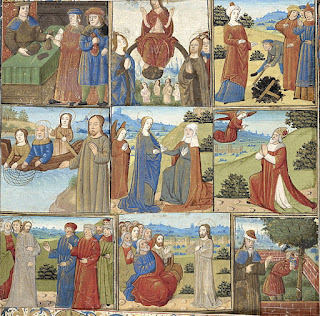 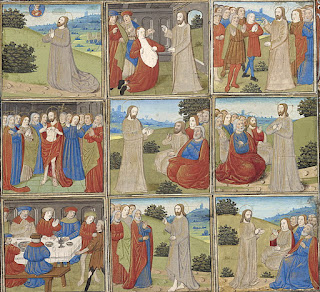 Many of the individual scenes are immediately recognisable and unambiguous, such as Empress Helena Finding the True Cross: 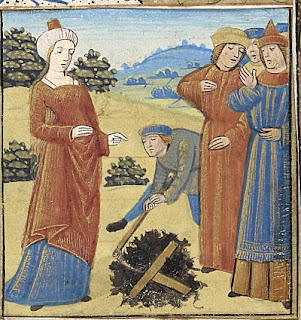 and Christ showing his Wounds to the Apostles: 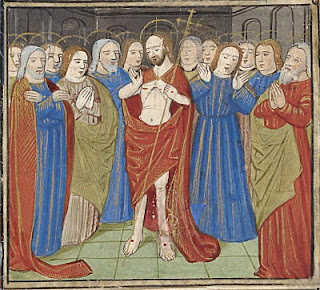 Others are somewhat ambiguous, but confidently identifiable, such as this, which presumably shows the Calling of Peter and Andrew, but could also perhaps be the Miraculous Draft of Fishes: 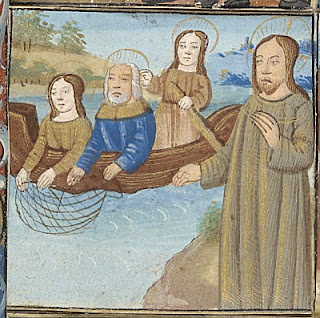 Others are much less clear (to me, at least), such as this: 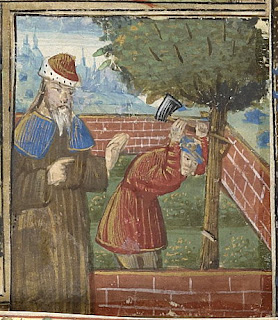 which I guess illustrates a verse such as:


"And he said to the vineyard-keeper, 'Behold, for three years I have come looking for fruit on this fig tree without finding any. Cut it down!'" (Luke 13:7)


"Indeed the axe is already laid at the root of the trees; so every tree that does not bear good fruit is cut down and thrown into the fire." (Luke 3:9)

Around the central miniatures are rectangular pieces of border decoration: 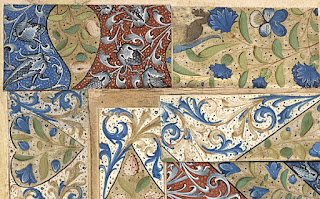 and at the middle of each side one or more pieces of text, with rubrics and illuminated initials:

The content of the text, and the subjects of the miniatures, have been summarised in the online description at Penn.

The format and style of the central miniatures appears to be identical to two other collages that were exhibited and offered for sale by New York art dealer Elin Mitchell c.1982, in an undated catalogue: 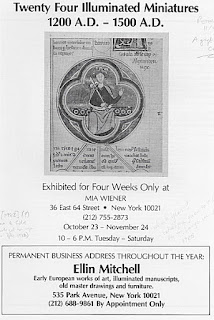 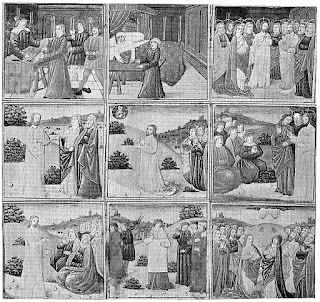 One, however, differs in having a four-by-three configuration of 12 miniatures: 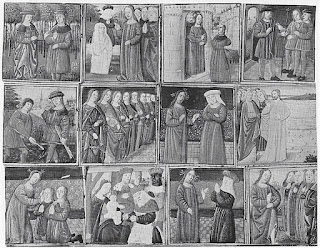 Here are some side-by-side comparisons of these miniatures with similar scenes from the Penn collages.

In this pair the draperies and poses of the foreground seated figures are nearly identical, including the curious way in which the front one crosses his arms and tucks his hands within his cloak: 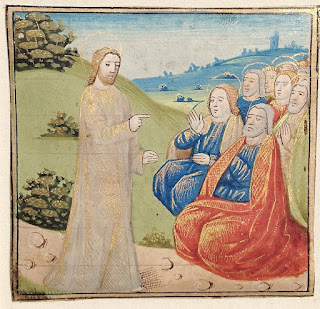 [Edit, 20 Sept. 2018: I have replaced the monochrome image that was above, with a colour one from a Flickr album of Scott Schwartz] 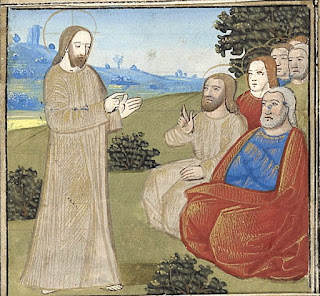 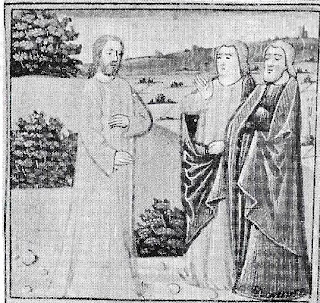 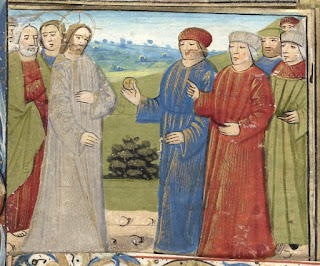 Apart from such compositional features, the similarity of style is, I think, obvious. The style is not the most refined, but the iconography is often very unusual, and the miniatures would therefore probably repay closer study.

When offered for sale c.1982 the Elin Mitchell miniatures formed two collages probably just like the Penn ones; the description stated:


"The borders corresponding to these miniatures are included in these elaborate collages, and are presently concealed beneath the matting."

I do not know their present whereabouts, but I do know that at least one collage has been taken apart, because a single miniature from it, the second one in black and white shown above, is now at The Israel Museum, Jerusalem.
Posted by Peter Kidd at 16:46