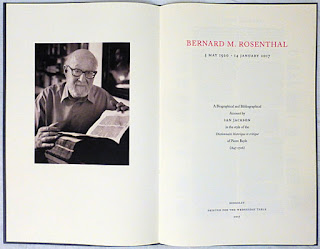 Many readers of this blog will have known, or at least known of, Bernard ("Barney") Rosenthal, who died at the beginning of the year. There are online obituaries by John Schilman here and by Ian Jackson here (also here).
Several other publications were written and/or published by Jackson, including:
He has now published a hugely expanded version of his obituary:


"This unshelveable folio pamphlet has been beautifully printed in letterpress by Richard Seibert with a red-and-black title-page. The frontispiece photograph of Bernard Rosenthal by Elvira Piedra was taken on the same day as the image that adorns Nicolas Barker’s obituary in The Book Collector for Spring 2017."

To give an idea of its size, and the proportion of notes (and their side-notes) to the main text, here is a typical opening, with a pencil for scale: 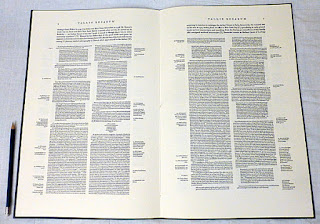 and here, as a slightly more legible close-up, is the phrase "Barney dealt in medieval text manuscripts" in the main text, above the end of note (NN) and beginning of note (OO), which continues below, and over the page:
For anyone with an interest in one of the history of 20th-(and early 21st-)century manuscript and rare book trade, and especially the place in it of the Olschki and Rosenthal families, it is an absorbing and entertaining read, dense with information. It can be ordered from Jackson's website.
Posted by Peter Kidd at 12:11