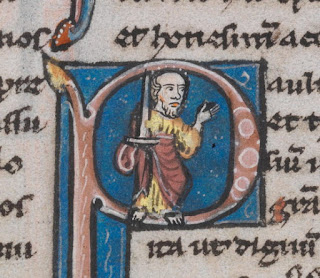 After Otto Ege's early death in 1951, his widow Louise inherited his estate, of which much of the value was his collection of medieval manuscript leaves. At the time of his death he had apparently done all the groundwork to prepare the portfolios of "Fifty Original Leaves", but did not live long enough to start marketing and selling them. In a previous post I looked at an example of Louise's attempts to market portfolios after his death.

It is usually assumed or implied that she sold leaves from books that he had already broken up, and that her role after his death was simply to try to recover the money that he had invested in the collection, but I have recently identified an example of a book that she apparently bought and broke herself.

The image above shows an initial on a single leaf from a 13th-century French Bible, whose provenance I have recently been researching. From the dimensions, number of lines per page, etc., we can trace this leaf to a Bible whose 70-leaf carcass was sold at Sotheby's, 26 November 1985, lot 54, among a large group (lots 39-92) of "Manuscripts from the Collection of Otto F. Ege (1888-1951)". It is identifiable as no. 245 in Scott Gwara's Handlist of Ege MSS. [1]

The Sotheby's catalogue describes and reproduces the final leaf of the manuscript, on which there was "an interesting mnemonic account of Henry the monk", spelled "Heinricus", and mentioning "Frisia, Saxony, Westphalia, Bavaria, Suebia, etc.": 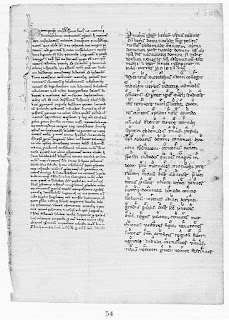 The natural assumption is that Otto Ege broke the book, but in fact it was demonstrably still intact the year following his death on 17 June 1951: it appears in Erik von Scherling's Rotulus, 6 (1952): 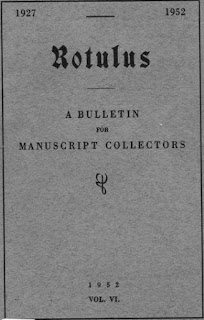 and can be recognised by the long quotation from a passage by "Heinricus monachus", mentioning "frisones, saxones, westfalii, bavari, suevis ..." (etc). This text on its own is not enough to confirm that the bibles are one and the same (it is by no means unique, and appears in a number of manuscripts from the 12th century onwards [2]), but the dimensions, number of lines, etc. are the same, and there is a plate in which one can compare the script and decoration: 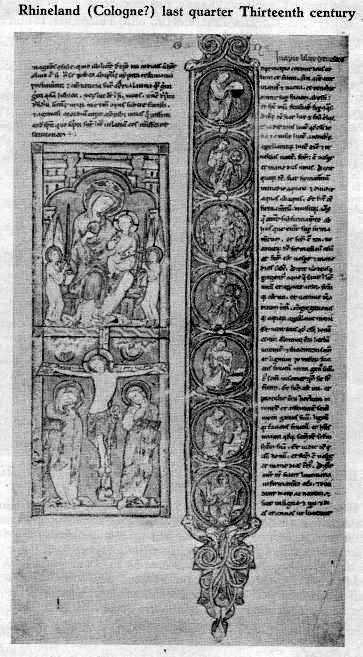 Presumably on the basis of the "Heinricus monachus" text, von Scherling attributed the book to the Rhineland, and as there is only one Bible among those known to have been in the Ege collection attributed to the Rhineland, it must be the one from which Mrs Ege records selling single leaves in August 1956 from the gift shop at the Memphis Brooks Museum, for $4 or $5 each, described as “1275 Germany Rhineland Bible”; no. 12 in this image [3]: 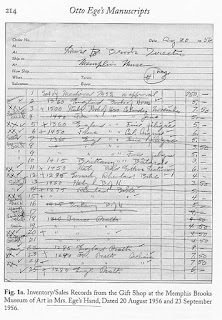 The von Scherling description provides us with another piece of provenance information; it states "old ex-libris stamp in margin of fol. 1v: Bibliotheca Oelrichsiana", which doubtless refers to a stamp like this: 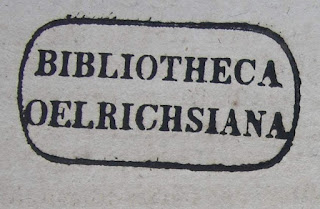 indicating that the book belonged to Johann Carl Conrad Oelrichs (1722–1798), Berlin-born lawyer, historian, and professor of the University of Szczecin, Poland.