There are two versions of the Weigel catalogue online. In my first blogpost about the collection, I included a link to one which includes the colour images, of which an opening is shown above.

But there is another version, with blank spaces in place of the images, presumably because of perceived copyright issues. This image shows the same pair of pages as the one above, but the reproduction of the Crucifixion miniature has been suppressed:
Both versions derive from the same Google digitization of a single copy of the catalogue at Stanford University (as is clear from the library stamps and other markings on the first few leaves), and both end at lot 83 on a verso, apparently facing a blank recto:
In the original printed catalogues, however, the facing page is not blank: there is one more item, lot 84; here is a scan from one of my copies: 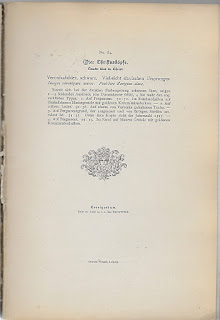 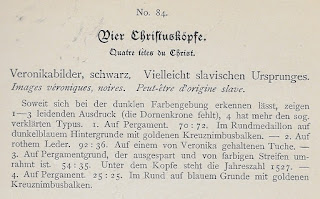 Summarising the numbered items in the description above, the heads are, respectively:
They correspond very closely to the volto santo (holy face) images mentioned in a recent blog-post, which were in the Hauck sale at Christie's, New York, 27-28 June 2006, lot 100, and are now in a New York private collection: 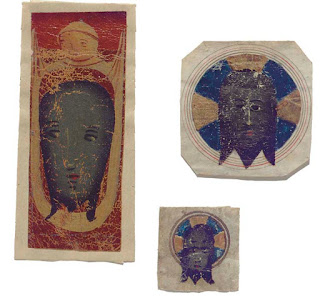 In the Hauck catalogue they are described and depicted as:
The identity of the second of these is somewhat uncertain, however: the mention of the coloured lines suggests it is Weigel no. 3, and the dimensions would also match closely if "35" in the Weigel catalogue dimensions is a typo for "53"; but there is also some doubt because the date "1527" is absent.

The image above is from the Christie's online catalogue, but if one compares it to the printed catalogue, it becomes apparent that the relative sizes of the three items have been altered; in the print version they are all claimed to be life-size, so I have measured and added the dimensions to my copy of the catalogue before scanning them, so that you can see both their true relative and absolute sizes: 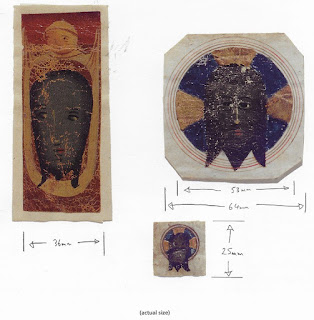 Since we are on the subject of black-faced volto santo images, I'll take the opportunity to mention one other, among the 15th-century additions to the late 12th-century Vita Christi manuscript at the Getty Museum:
When I examined the manuscript in 2014 I noticed that the face was pasted-on to the page, before the text was written, and not painted directly on the parchment leaf as had previously been assumed; the golden rays on a blue and red background were probably added partly to disguise the join. The join is clearly visible, however, especially at the upper left, and along the lower edge:


There is quite a lot more I could say about curious black-faced volto santo images in illuminated manuscripts, but I'll save it for another occasion ...
Posted by Peter Kidd at 17:54