The Manuscripts of T. O. Weigel, IV:
Cuttings from a Dominican Nuns' Antiphonary (from Zurich, and datable to 1300?) 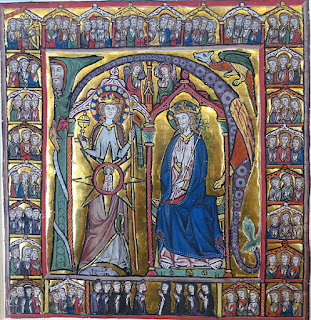 The apparently unique iconography of the miniature above allows us to identify it as no. 26 in the 1898 Weigel and 1905 Hiersemann catalogues discussed in the previous posts: 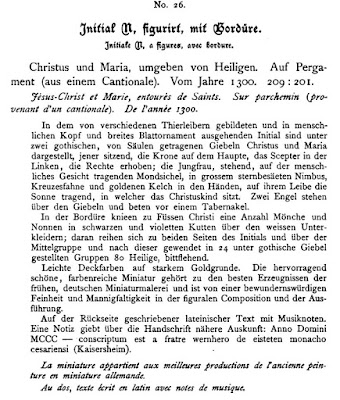 The following item in the catalogue, no. 27, comes from the same manuscript:

and can be identified as a cutting offered by Jacques Rosenthal in 1916 [1]; subsequently in the collection of Robert von Hirsch, sold at Sotheby's, 20 June 1978, lot 5, and now at the Historisches Museum, Frauenfeld. Coincidentally, it was put online on the e-Codies website within the past few weeks:
In the recent catalogue of the non-French and non-Italian illuminations in the McCarthy collection, I argue that the well-known series of cuttings to which these cuttings belong, usually dated circa 1300, comes from a manuscript made for the Dominican nunnery at Zurich: 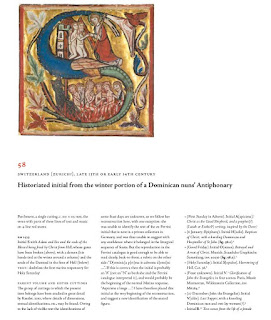 One of the key pieces of evidence for this suggestion is the ex-Weigel cutting shown at the top of this post, now at the National Gallery of Art, Washington D.C.

Below the feet of Christ and a Virgin figure are kneeling four Dominican nuns, two Dominican friars, and (recognisable by the white cross on their shoulders) three Hospitallers:

Similarly, a cutting from the same series, sold at Christie's in 1991, shows the baptism flanked by a kneeling Dominican and Hospitaller: 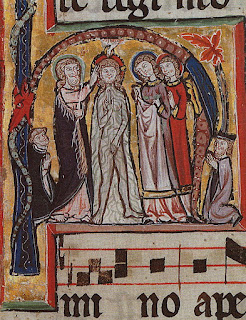 In brief, my argument is that the only place in medieval Switzerland that had houses of Dominican nuns and friars, as well as Hospitallers, was Zurich.

Before the present identification of the two cuttings in the collection of Weigel (d. 1881), the earliest known provenance of any part of the manuscript was thirty years later, when one of the cuttings was sold at auction in 1911; it is now in the Wildenstein Collection at the Musée Marmottan: 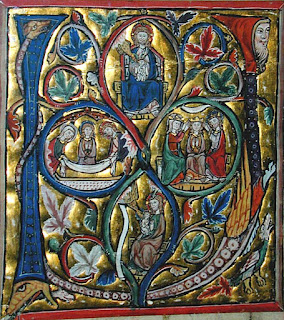 But we can potentially take the provenance back all the way to the moment of its creation.

In the 1916 Jacques Rosenthal catalogue mentioned above, the cataloguer writes,

This information corresponds with a 19th-century inscription on the back of the Washington DC cutting:

which I find difficult to read in places, but apparently says:

Interestingly, the Weigel catalogue transcribes a somewhat different version of this inscription, in Latin:

It therefore seems that at the time of the writing of the Weigel catalogue in the late 19th century, the cutting was accompanied by a (medieval?) Latin inscription that has since been lost, except for its late 19th- and early 20th-century paraphrases in German.

It is not clear why a monk of the Cistercian abbey of Kaiserheim, in Bavaria, might write a manuscript for a nunnery in Zurich, about 260km to the south-west, but if the Latin inscription was derived from a genuine original colophon, the Weigel catalogue is potentially the only surviving evidence for the name of the scribe and the precise date of the manuscript -- which, as mentioned above, is been dated c.1300 on stylistic grounds in all the modern literature. 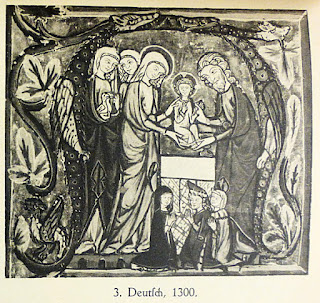 The date of this undated catalogue is given variously in library catalogues recorded in Worldcat, from "[1917?]" to "ca.1923". In fact it can confidently be dated 1916 from the fact that it was reviewed in the middle of that year in the monthly Zeitschrift für christliche Kunst, 26, no. 6 (digitized here).


Edit 6 January 2020:
Here is a link to the National Gallery of Art cutting, with a zoomable image.
Posted by Peter Kidd at 11:36