The Macclesfield Copy of the Works of Lewis Caerleon 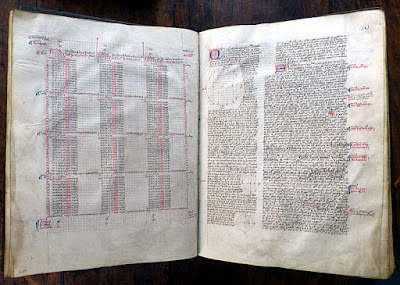 On Friday, the Department for Digital, Culture, Media & Sport, and The Reviewing Committee on the Export of Works of Art and Objects of Cultural Interest, issued a Press Release announcing that they have has placed a temporary export bar on a manuscript of astronomical works by Lewis of Caerleon (d. c. 1500).

I catalogued it for the owner in 2009, and revised my description for an exhibition in 2014. It was thanks to that work that I was able to recognise another Lewis Caerleon manuscript at Corpus Christi College, Oxford, about which I blogged in 2016.

The volume seems to have been written under the author's direct supervision, and he writes his name in several places. I reproduced a few images of Lewis's signature in the 2016 blog, but here I will show the evidence for the other stages in its provenance. 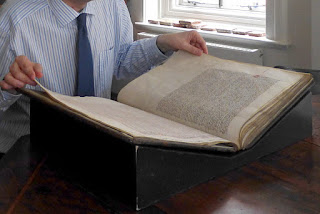 It is a large volume, as the image above shows. The blind-stamped binding is contemporary, and unrestored; some of the stamps appear to be unrecorded. 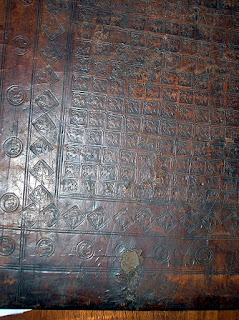 The lower edge of the front board has a scar showing where a chain-staple has been removed (visible above, details below), demonstrating that the volume was once in a chained library: 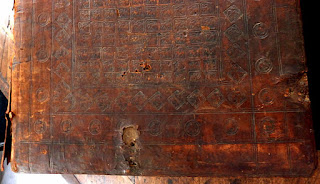 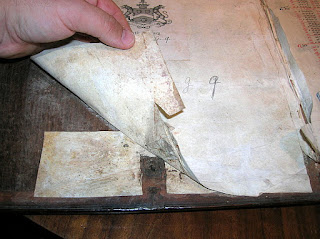 Which chained library? Lewis was a graduate of Cambridge University and had a special interest in the work of scientists at Merton College, Oxford, some of whom are mentioned in the text. The fact that the present volume is more handsome than any other surviving copy of Caerleon’s works suggests that he may have intended it as a presentation copy, and he is known to have given copies of his eclipse tables to the Universities of Cambridge and Oxford; more specifically a copy of his works is recorded in the medieval libraries of Clare College, Cambridge, and Lewis gave a copy to Merton College, Oxford, in October 1490, but neither copy survives in those collections today. The next two owners provide possible links with Merton and Cambridge.

An unidentified 16th-century reader wrote a marginal annotation drawing special attention to mentions in the text of Simon Bredon [Wikipedia] and Richard of Wallingford [Wikipedia], both of Merton:
The next identifiable owner was Sir Henry Spelman (d. 1641):
He recorded his purchase on 11 April 1606, at the upper edge of the first page:
Spelman [Wikipedia] was educated at Cambridge, and lived from 1590–1612 (during which period he bought the manuscript) in Norfolk, an adjacent county.

After Spelman’s death his manuscripts passed to his heirs, and were eventually sold to the London bookseller John Harding, who auctioned them on 28 November 1709 (Bibliotheca Selectissima: Being the Library of the Late Sir Edmund King ... Sir Henry S[pelman] …): in the catalogue this manuscript was described extremely briefly as item 3 on p.55: “Tabulæ Astronom. Antiqua, [Pergam.]”.

This identification is confirmed by the much more detailed description by Humfrey Wanley in BL, Harley MS. 7055, fol. 232:

Wanley's description is a transcription of the heading at the top of the first page, below the Spelman acquisition-note:

The manuscript was next owned by Walter Clavell (d. 1740), barrister-at-law, and was included in the catalogue of the auction of his library on 29 March 1742 and following days: Bibliotheca Selectissima: or, A Catalogue of the Valuable Library of Books and Manuscripts of Walter Clavell, of the Inner Temple, Esq. FRS, p.96 no.108 (“Tabulæ Astronom. ex Collectione H. Spelmanni, in Pergam.”), where it was bought by "Jones" for 11s.

William Jones (d. 1749) [Wikipedia] was a Welsh scientist, mathematician, friend of Sir Isaac Newton, and tutor of George Parker (cf. below): almost all the medieval manuscripts from the library of the Earls of Macclesfield sold at Sotheby’s on 22 June 2004 were bought by Parker from Jones; Jones is likely to have been especially interested in a text by his countryman Caerleon.

George Parker, 2nd Earl of Macclesfield (d. 1764) [Wikipedia] was an astronomer, politician, President of the Royal Society, and builder of an astronomical observatory at the family seat, Shirburn Castle, Oxfordshire; he doubtless took great interest in a manuscript so full of astronomical knowledge.

The manuscript remained in the library of the next seven Earls, down to Richard Timothy George Mansfield Parker, 9th Earl of Macclesfield (b. 1943), at Shirburn castle: 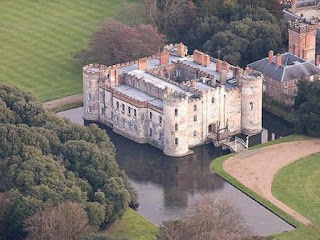