(Not) A New Lewis Caerleon Manuscript 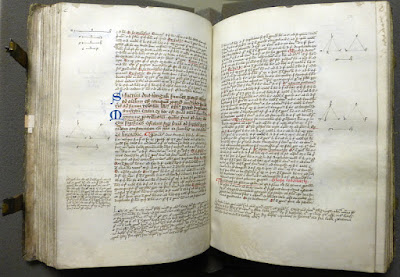 Some months ago, as part of the work I am doing for Corpus Christi College, Oxford, I looked at their MS 234, a handsome English 15th-century copy of Euclid's Elements. Among its especially pleasing features are its original binding, precisely-drawn geometrical figures, and one illuminated page: 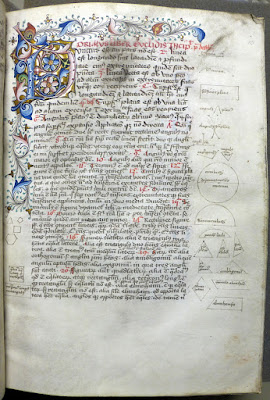 It was owned by John Dee (1527-1608/9), the astronomer, astrologer, mathematician, alchemist, book-collector, advisor to Elizabeth I, and general polymath; on fols.1r and 2r it has two markings typical of books he owned: the repeated Jupiter symbol (♃) and the ladder-like symbol: 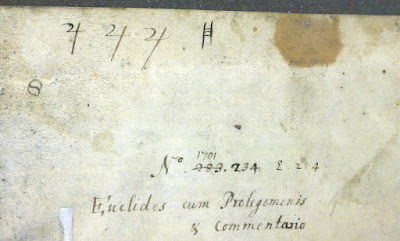 Dee also writes his name and the date, as well as the ladder symbol, above the start of a prefatory text (fol.4r):
But what interested me more than the 16th-century Dee provenance was the name "Lewys" that occurs in several places within the text: 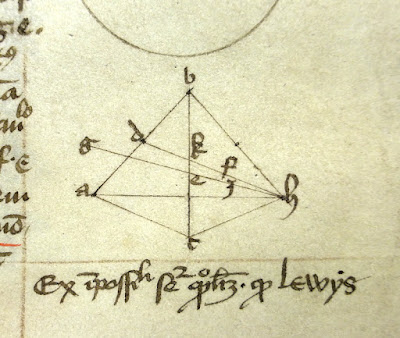 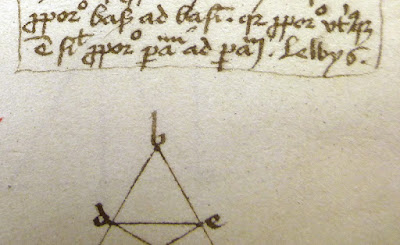 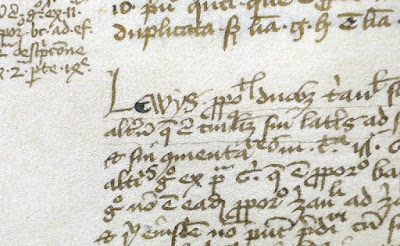 In his catalogue of the Corpus medieval Latin and vernacular manuscripts, Rod Thomson simply states "Owned and partly written by an unidentified Lewys":

I recognised the name and the handwriting; they occur in a huge and wonderful astronomical volume from the Macclesfield Library (but not in the Sotheby's Macclesfield sales), that I had catalogued for Sam Fogg in 2009, which has an unbroken provenance of thirteen owners from Sir Henry Spelman (d.1641) to the present day. Many of the astronomical tables in the volume are attributed to the Welsh physician and astronomer Lewis Caerleon:
Sometimes the text or a rubric is self-referential:
Several notes are precisely dated, and in two cases he mentioned that he compiled the astronomical tables while he was incarcerated in the Tower of London:
Often Lewis give his name in Latin, but sometimes the vernacular (always spelled "Lewys"):

A considerable number of manuscripts by Lewis, or with his annotations, are known, and I was pleased to think that I had found a new one. But when I went to check the standard article about his manuscripts by Pearl Kibre ("Lewis of Caerleon, Doctor of Medicine, Astronomer, and Mathematician (d. 1494?)", Isis, 43 no.2 (1952), pp.100-08), I found that she had got there more than 60 years before me:

So the attribution to Lewis is correct, but not new.