The previous post was inspired by a leaf that was sold as lot 384 in the Lanna auction at Stuttgart in 1910. Anne Korteweg has kindly contacted me to let me know that lot 385 in the same sale -- apparently from the same manuscript -- is now at the Rijksprentenkabinet at the Rijksmuseum, Amsterdam:
The borders of both are clearly inspired by late 15th-century so-called Ghent-Bruges borders, but neither looks quite "right" for Flanders: the creatures inhabiting the St Margaret border are untypical of Flemish MSS, and the way in which the plants are arranged against a plain gold ground in the Stephen miniature look strange: they are neither typically "strewn", nor shadow-casting, and they combine cut flowers with live growing plants.

What I did not mention in the previous post is that the leaf at Sotheby's has been catalogued by Mara Hofmann for sale in their 5 July auction; she recognised it as being Spanish, and contacted Josefina Planas Badenas, who pointed out that such border designs were particularly popular in Toledo around the turn of the century (cf. her ‘Bernardino de Canderroa y la iluminación del libro’, Rivista di Storia della Miniatura, 19, 2015, pp.131-50).

Anne also sent me scans of an annotated copy of the 1910 Lanna catalogue:

The subsequent provenance of the Margaret leaf is currently unknown, but after 1910 the Amsterdam leaf was owned by the Princes of Liechtenstein at Schloss Vaduz, and was bought by the Rijksprentenkabinet, in 1948, through Cassirer, Zürich.
I assume that both leaves must be from the same manuscript, otherwise their presence together in 1910 would be an amazing coincidence (they may come from a book that was broken up during Lanna's collecting career, or perhaps he obtained them together from an older collection), but there are a disconcerting number of differences, including the types of border decoration, the number of lines of text, the way in which the illuminator(s?) used the space that had been left by the scribe(s?), and the way in which one has a 1-line illuminated initial while the other does not.

But both leaves have one feature in common that I do not remember ever having seen before. In high-class manuscripts from the 13th century onwards one occasionally finds that there is ruling to guide not only the bottoms, but also the tops of the minims. Here is an example from the so-called Whitby Psalter at Harvard:
In the present two leaves there is a third line of ruling, apparently to guide the descenders and apparently in a slightly different colour of ink (these photos are manipulated to make these ruling more visible, and their colour-difference more obvious): 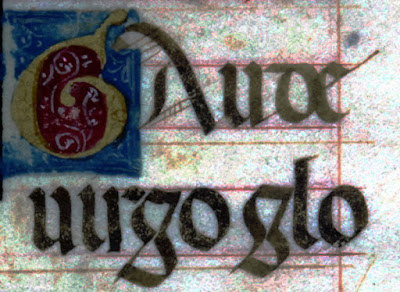 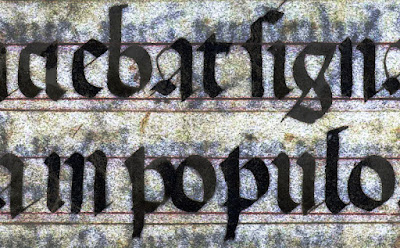 Maybe this is not so uncommon in Spanish manuscripts, but it's new to me.