Online searches locate several fully or partially digitised manuscripts from St-Jacques, including Harvard, Houghton Library, MS Riant 35 (description here; digitisation here), which has an ownership inscription and title on the front flyleaf:
and shelfmarks "G.91" and "E.30", comparable to those in the Peter Lombard manuscript (discussed in the previous post), on the first page of text:
It also has a note at the back, recording that it was bought in 1426:
This inscription is printed in the 1788 St-Jacques auction catalogue:
which also makes it easy to identify in the 1884 catalogue of the collection of the bibliophile François Vergauwen:
and in the 1899 Riant catalogue:

The reference to St-Jacques "in insula" in the inscription refers to the former terrain of Liège, with parts of the city surrounded by water:
Further St-Jacques manuscripts are at the British Library, including Add. MS. 18217: 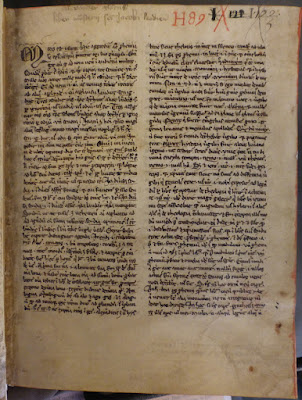 Perhaps the most interesting BL manuscript for our purposes is Add. MS. 20009: 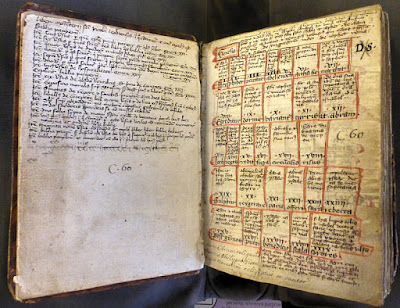 As Hanno Wijsman commented on the previous blog, a group of St-Jacques manuscripts found their way to Maynooth, west of Dublin, and have recently been catalogued. Unlike all the ones I have been able to examine in person, the Maynooth ones all retain their 18th-century Philip Fisen bindings: 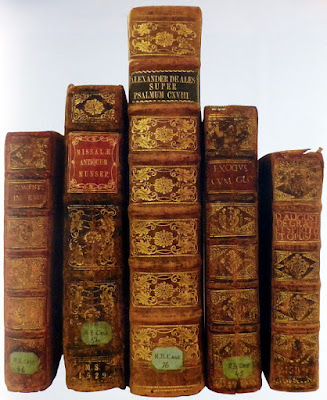 Another similar Fisen group is on the Darmstadt library website:
The Maynooth catalogue also reproduces some more shelfmarks and Fisen inscriptions: 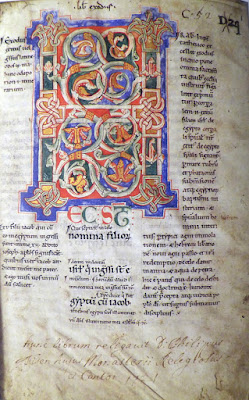 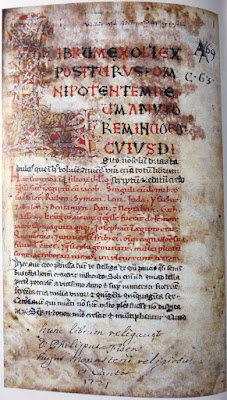 There is an unpublished 1971 thesis about the library of St-Jacques, from which the author has published two articles:

These list more than 600 manuscripts known to have been in the library at St-Jacques, of which the current location of more than 190 is known. They also explain the shelfmarks. Around 1667 Nicholas Bouxhon, abbot of St-Jacques from 1695 to 1703, prepared a detailed catalogue (now Brussels, BR, MS 13993), in which the manuscripts were classified into one of 12 categories, from biblical commentaries (A) and Church Fathers (B), to books on the quadrivium (L), and trivium (M). So I was apparently wrong to suggest in the previous post that the earlier alpha-numeric markings were not classmarks, but it is likely that the books were shelved according to their classification, in which case the markings served both as classmarks and shelfmarks.

Mortiaux-Denoël and Guillaume make a passing mention of the Peter Lombard manuscript. They record how some of the finest manuscripts in the St-Jacques collection were acquired at the 1788 auction by one of the canons, Quirin d'Adseux. He bought three bibles and two commentaries on the Psalms, one by Peter of Herenthals, and the other our Peter Lombard. After his death they passed to the Abbé Janssens (1783-1853), professor of theology at Liège seminary, and were eventually dispersed, one of the three bibles ending up in Liège, one in Paris, and one in London. How and when the Peter Lombard gained its present wonderful binding, I do not know.