Manuscripts from St-Jacques, Liège [Part I] 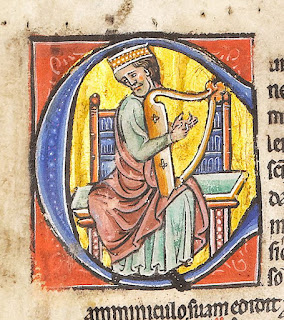 At the recent TEFAF art fair at Maastricht, one of the items that piqued my curiosity was a very handsome copy of Peter Lombard on the Psalms, offered by Dr Jörn Günther Rare Books. It has an impressive provenance from the early 19th century onwards, but it also had some unsolved clues to its earlier history.

In particular, there are shelfmarks in the upper right corner, and an inscription in the lower margin of the first page: 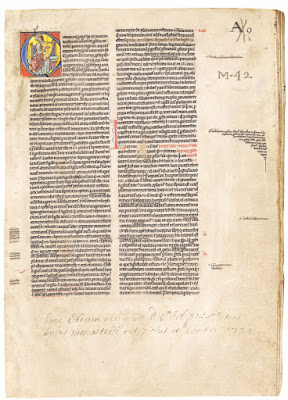 But before investigating them, we may deal with the already-known provenance.

Books from the collection of Major J.R. Abbey (1894-1969) are easy to recognise: he writes his name at the front, and his accession number (preceded by his initials 'JA') and date at the back, all usually in blue ink. Once you have the JA number, it is easy to locate a manuscript in the catalogues of his sales at Sotheby's by consulting the concordance at the end of the 11th and final catalogue of the dispersal of his library, which took place on 19 June 1989: 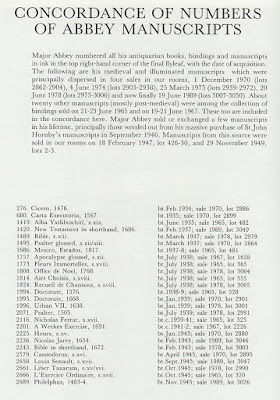 From this we learn that the present manuscript, JA7064, was in fact in the very same 1989 catalogue, as lot 3010. The description tells us that Abbey acquired it from the Dyson Perrins sale, 29 November 1960, lot 102, and provides the earlier provenance: 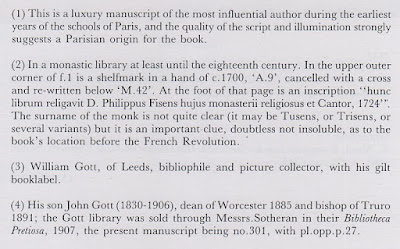 The 1907 Sotheran Bibliotheca Pretiosa catalogue referred to here is apparently the first record and reproduction of the present extraordinary binding: 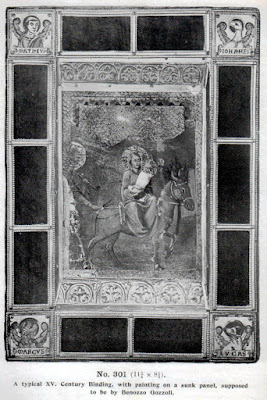 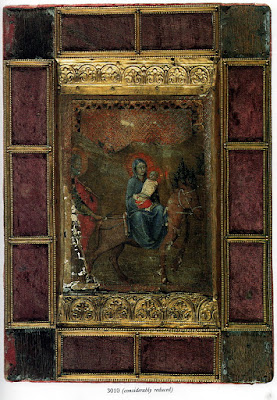 I do not yet know where William Gott acquired the book, but it is perhaps significant that he is known to have dealt with the London book-dealer Thomas Boone.

After the Abbey sale, the manuscript belonged to the Schøyen collection, as MS 258 ('MS' fortuitously being an abbreviation both for 'manu scriptum' and 'Martin Schøyen'), from which it was again de-accessioned in 2010.

So much for the known provenance. What about the unidentified shelfmarks and inscription? 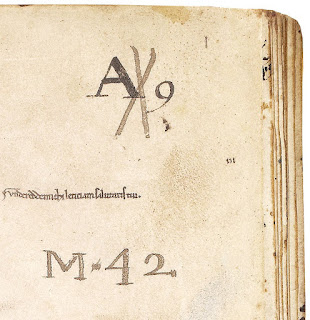 There is no easy way to interpret shelfmarks such as these unless you happen to recognise them, but they do suggest a library of considerable size. If all the letters of the alphabet from A to at least M were used (each presumably representing a library bay, press, or shelf) and if each of them had an average of 42 or more books, then we are potentially dealing with a collection of more than 500 volumes. (Neither 'A' nor 'M' is obviously a reference to the author, title, or subject of the work, suggesting that these are indeed shelf-marks, not class-marks).

The inscription in the lower margin is rather faint, but most of it is legible:

Here is a somewhat enhanced version (as usual, click to enlarge):

This is similar, but not identical, with the reading in the 1989 auction catalogue, which suggested Fisens / Tusens / Trisens as the surname of the monk. A web-search using the correct reading 'Fisen', provides a number of hits, including a catalogue of manuscripts at Darmstadt, with this passage in its introduction:

Once we know that our inscription appears in other books from the library of St-Jacques, Liège, auctioned in 1788, we can find a copy of the catalogue online, and our manuscript in it: 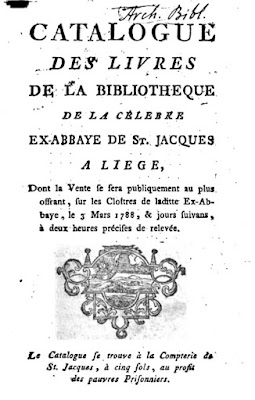 The title of the work as given in the description appears in the only rubric on the first page of text:
and the incipit is the standard one for Peter Lombard's Great Gloss on the Psalms:
In the next post I'll look at a few other manuscripts from St-Jacques.