In connection with some work I am doing for Corpus Christi College, Oxford, I have had reason to look at a number of printed books, including a copy of The Contemplaycion of Synners, printed by Wynkyn de Worde at Westminster in July 1499:
The start of the text faces a woodcut depicting the work being presented to Richard Fox, as Bishop of Durham (1494-1501), who would later found Corpus Christi in 1517. The same woodcut appears on the recto of the first leaf and, as can be seen from the inscription in the lower margin, this copy was given to the College by Nathaniel Ellison in 1708.
More interesting is the crossed-through inscription in the upper margin, however:
Until recently, when I sent a correction to the College, the official catalogue description stated "Largely illegible 16th. cent. inscription at head of t.p. [sic], apart from the words "p[er] amico[rum]".

Ownership inscriptions are often rather formulaic, allowing one to confidently conjecture words and phrases like "Iste liber" and "monasterii sancti" or "conventus fratrum", even when they are almost completely erased or obliterated. In the present case the first two lines cause no problems, the only oddity being that "Richardi" seems originally to have been written as "Rechardi":

A bit of Googling takes us to a similarly-worded inscription in Cambridge, St John's College, MS. F.28 (description here), of which the Special Collections Librarian, Kathryn McKee, very kindly sent me images of Richard's signature at the end of the text:
and his inscription at the beginning of the volume:
This seems to confirm M.R. James's reading:

This allows us to confidently read the middle of the last line in the Oxford book as:

We now have two dates for book-acquisitions by Richard Smythe (as he spells himself): 1523 and 1527. There are several possible candidates among the Cambridge Alumni listed by Venn and now searchable online, but in Foster's Alumni Oxonienses 1500-1714, there is really only one Richard Smith whose dates correspond plausibly with those of our book-owner: the son of a blacksmith who went on to become "one of the most celebrated scholars and theologians of the Reformation age":
This is of course a very appealing identification, but the correlation of dates does not prove it. I therefore contacted the author of the ODNB entry on "Smyth, Richard (1499/1500–1563)", J. Andreas Löwe, who is now the Dean of Melbourne; he kindly confirmed that the handwriting is that of the same man. The ODNB entry records a 1641 woodcut depicting Smythe preaching while the "Oxford Martyrs" Latimer and Ridley are burnt at the stake: 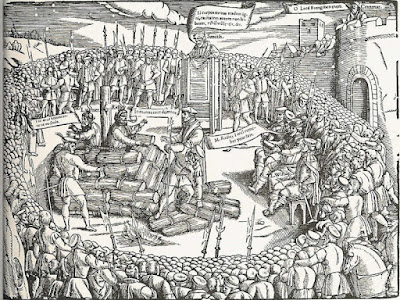 What is still not clear is what is meant by the references to the "Regestro" / "Registro" in each inscription: it seems that Smith kept a numbered catalogue of his library, which must therefore have been substantial, but I have neither been able to find a reference to any work having been done on his library, nor any other example of comparable inscriptions. Julian Reid, Archivist of Merton, kindly informs me that there are no records of Smythe as a benefactor of Merton, of which College he was a Fellow, nor could he or I locate any other Smythe books in SOLO, the Oxford-wide library catalogue.

Perhaps readers of this blog may know more about his library, or know of books with similar inscriptions?