A Loose Flyleaf in Canberra

Sometimes the most unassuming fragments turn out to be among the most informative. Looking at images of recently-digitised manuscript fragments at the National Library of Australia, Canberra, my eye was caught by a flyleaf with the stencilled crest of Thomas Phillipps on the verso:
and on the recto various late-medieval inscriptions:

The Phillipps crest is accompanied by his manuscript number, "534":
which makes it easy to identify in his catalogue among the large group of manuscripts (Phillipps MSS 387-759) acquired from Leander van Ess (1772-1847).

The inscriptions on the other side of the leaf are not always easy to read: 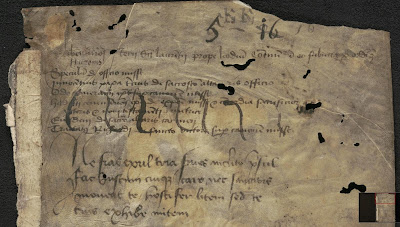 but one can make out the start of the top line as:

In other words, the manuscript once belonged to the abbey of St Laurence, Liège. 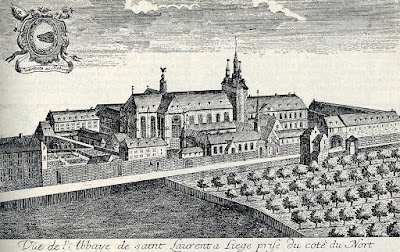 Phillipps also read the ownership inscription, and duly records the provenance in his catalogue:
The "[149]" at the end of this entry indicates that it had been no.149 in van Ess's 1823 catalogue:
In his own catalogue, Phillipps provides references to the van Ess catalogue, in the expectation that the latter would be used to supplement the very brief descriptions in the former. Presumably for this reason, the gave a copy of the van Ess catalogue to the Bodleian in 1825 (which can be downloaded as a PDF here):
For the past several years, whenever I have encountered a van Ess manuscript (including one at the Newark Public Library), or a previously unrecorded reference to one, I have corresponded with Milton "Mac" Gatch (to whose website I linked above) about his regrettably still-unpublished edition of the 1823 van Ess catalogue. His unpublished draft states that van Ess 149/Phillipps 534 was offered in the Phillipps sale at Sotheby's, 6-9 June 1910, lot 447, unsold, and was re-offered the following year, Sotheby's, 24-28 April 1911, lot 385, where it was bought by "Morris, Rev."

Although it turns out that the lot number is off by one (422, not 423), this is clearly the manuscript from which our flyleaf comes: 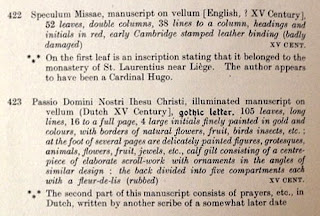 Here the volume was bought by "Leighton", doubtless the London firm of binders and booksellers J. & J. Leighton. The 1823 van Ess catalogue had already recorded the binding as "schadhaft", and the 1920 description confirms that it was "badly damaged", so Messrs Leighton presumably rebound the book, which explains how its flyleaf became separated from the volume. It is very interesting to note that the manuscript itself was apparently English, and, until 1920, in an "early Cambridge stamped leather binding".

The ownership statement transcribed above is, in fact, followed by a few more words which introduce a list of contents:

The itemised contents suggest that most, or all, of the texts in the original volume concern the mass, which in turn perhaps suggests that the original owner was a priest:

For some unknown reason the last four works are crossed-through. Below them, in another hand are four lines followed by "Metra de quod(dam) Ep(iscop)o expulso a patria Leod." 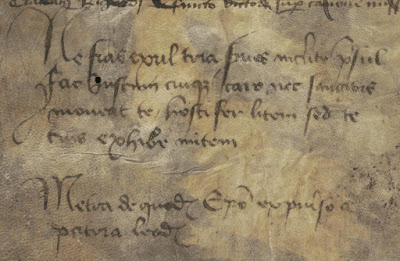 This is presumably a reference to Louis de Bourbon (1438-82), whose uncle, Philip the Good, secured for him the Prince-Bishopric of Liège, from which he was expelled by the citizens when he took up the position in 1465, and again in 1467 after he had been reinstated.

We therefore seem to have several clues towards an interesting story, concerning a manuscript written in England, very possibly at Cambridge, which was taken to Liège fairly soon after. Was the book written by/for a student from Liège, who returned home from Cambridge after completing his studies, to become a priest?


UPDATE 12 April 2016:
Bill Stoneman at Houghton Library has traced the manuscript, apparently not yet re-bound, in two Leighton catalogues:

The pencil annotation "Pt 5" indicates that it was not sold from this catalogue, and was therefore re-offered a few years later in:

Here the annotation seems to indicate that it has been "S[ol]d".

In his unpublished edition of the van Ess/Phillipps manuscripts, Mac Gatch quotes a 1993 letter from the Acting Manuscripts Librarian at Canberra, to the effect that Sir Rex Nan Kivell, in whose 'Calligraphy Collection' the flyleaf belongs, frequently had books rebound, and cases made, by Baytun's of Bath. It therefore seems likely that the manuscript in now in a Bayntun binding of about the 1930s-50s, and that they were responsible for the separation of the flyleaf.

** I have also made some corrections to my transcription of the list of contents, thanks to some very useful comments from David Shaw.
Posted by Peter Kidd at 16:37