A Glimpse of Bathsheba Bathing 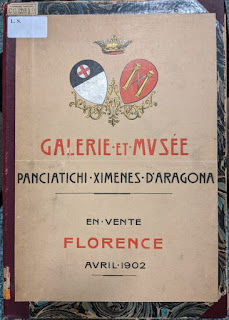 I decided to fill some free time one evening recently by browsing old art-sale catalogues at the Warburg Institute (arguably the best humanities library in London). Usually when I browse old catalogues I concentrate on auction catalogues of medieval manuscripts, but illuminated manuscripts occasionally appear in catalogues of Old Master drawings (the subject of a future blogpost) and of more general art collections.

The front cover of one such is shown above; the title-page provides more information: 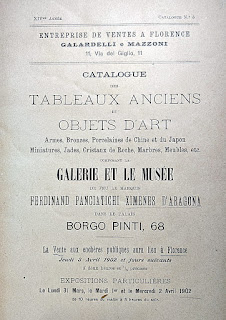 A Preface in French and English provides some background, noting that two mid-16th-century members of the family, Bartolomeo and Lucrezia Panciatichi, were painted by Bronzino, in a pair of portraits now at the Uffizi [Wikipedia here and here]. The recently deceased owner of the collection, Ferdinando Panciatichi Ximenes d'Aragona (1813-1897), had inherited the title and various properties, which included the Castello di Sammezzano in Val d'Arno [Wikipedia], which he remodelled in the Moorish Revival style: 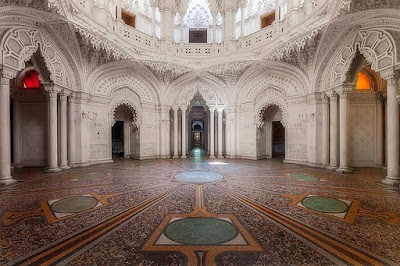 He also consolidated the collections, and formed a private museum in Florence. Among the reproductions in the 1902 catalogue there are a couple of views of the interior of the palazzo, giving an idea of how the art collection was displayed: 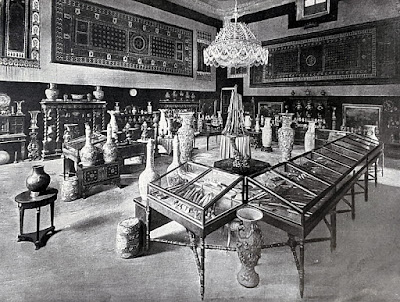 Among the reproductions is this one, showing lots 274-277, a group of late 15th- and early 16th-century miniatures, all in Renaissance frames: 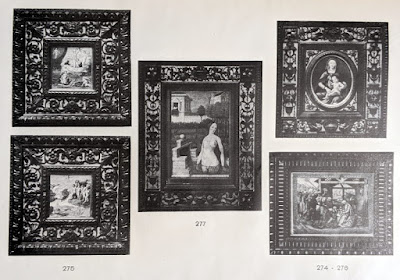 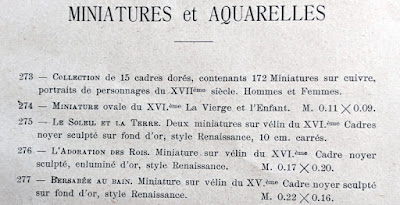 I do not recognise the outer four, but the one in the middle, lot 277, is now at the Getty Museum; here is a close-up of the 1902 catalogue, and a modern colour version: 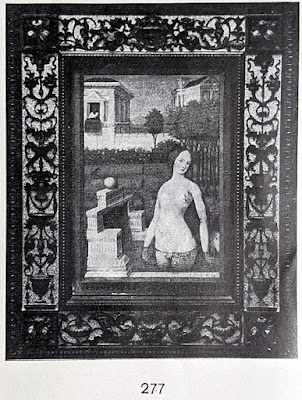 The miniature is from the well-known "Hours of Louis XII" [Wikipedia], illuminated c.1498/99 by Jean Bourdichon for King Louis XII of France, and has been the subject of several publications, including Thomas Kren, "Looking at Louis XII's Bathsheba", in A Masterpiece Reconstructed: The Hours of Louis XII, ed. by T. Kren and M. Evans (Los Angeles, 2005), pp. 42-58. [PDF here]

Two other miniatures from the same manuscript made an appearance in a blogpost here about manuscripts looted during WWII, but until now, the provenance of the Bathsheba miniature (as recorded in the Getty website), was unknown between the early 16th century and 1974:

The 16th- and 17th-century provenance of the parent volume is murky, but we know that it was broken up by about 1700, when Samuel Pepys included a leaf in a volume of calligraphic specimens, now at the Pepys Library in Cambridge [Wikipedia]. It was probably broken up in England (perhaps by John Bagford [Wikipedia]), as all the known leaves surfaced here. We now know that at least one miniature found its way to Italy before the 20th century.
Posted by Peter Kidd at 09:51