It was in preparation for a tour of CT, MA, and NY libraries in 2014 that I found out that Vassar College has some very interesting unpublished leaves and cuttings, notably the two cuttings from a Missal of Pope Leo X that I described in several blogposts, starting here.

When I got there, one leaf that particularly intrigued me is shown in the image above and below, written in a distinctive, angular, script. It is said to be Flemish but to come from Chichester cathedral (on the south coast of England).

The provenance evidence is a pencil inscription in the upper left corner of the verso: 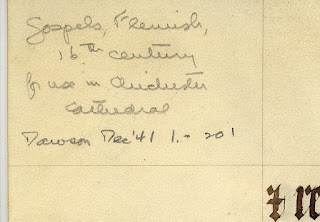 "Gospels, Flemish,
16th century
for use in Chichester
Cathedral"

and below this another contemporary hand has added

Due to the unusual provenance, the parent manuscript is easy to find in the Schoenberg database (SDBM_18774), which leads us to a June 1938 Sotheby's catalogue description (just a few years before Vassar acquired their leaf). The parent volume was being sold anonymously by "a Gentleman", on behalf of the Vic-Wells Fund (i.e. for the benefit of the Old Vic and Sadler's Wells theatres):

The description provides quite a bit of information:

⁂  Although the illumination appears distinctively Flemish, the manuscript was apparently written for use in Chichester Cathedral, as on folio 44 appears the heading ... "In festo sanctae translacionis patroni nostri sancti Richardi episcopi et confessoris."

There was a Richard who a bishop of Andria, in Apulia, and later a minor saint [Wikipedia], but this is far more likely to refer to Richard de Wych (1197-1253), bishop of Chichester, who was canonised in 1262, and his relics translated on 16 June of the same year, who came to be venerated throughout England [Wikipedia].

I recently decided to try to actively look for more leaves, and now have a much better idea of what the parent volume looked like.

Two leaves were exhibited at the Elbin Library, West Liberty University, West Virginia, as seen in the lower left corner of this image on their Flickr site: 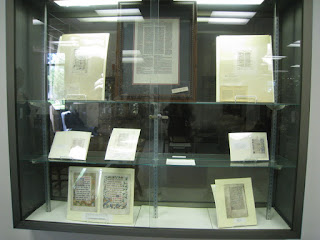 By downloading their images and adjusting the perspective one can get two reasonably clear and straight images of the two leaves: 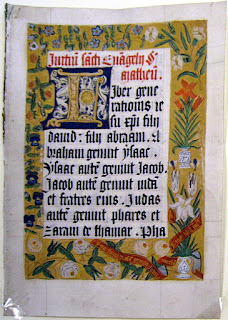 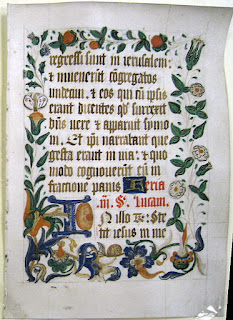 A "double illuminated manuscript leaf" (i.e. a bifolium) was sold by Leslie Hindman auctions, Chicago, on 5 May 2016, lot 396, and although two of the three available images is low resolution, one shows the whole bifolium, and the other two are good enough to read the text, and give a good idea of the leaves' decoration: 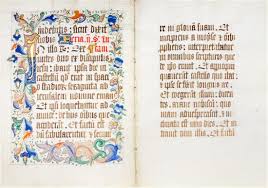 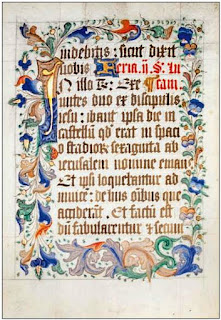 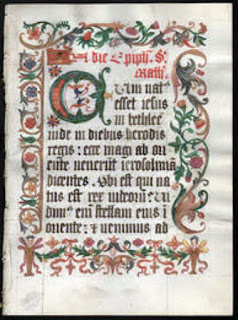 This had been offered online two years earlier, in 2014, by SessaBks: 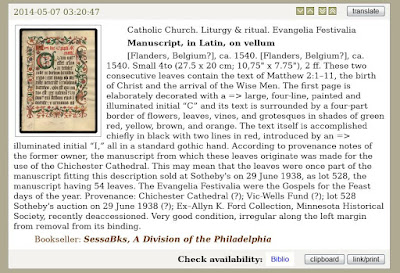 I have not yet been able to obtain any further information, or images, but to judge by an online Inventory of [the Allyn K. Ford (1878-1964)] Collection of Historical Manuscripts at the Minnesota Historical Society, they own two leaves (emphasis added):


"980.  Manuscript, Illuminated, undated.
Text in Latin refers to the birth of Christ. Two leaves (four pages). First page illustrated, the other three lettered only. Note in Allyn K. Ford file says: "Leaf from an illuminated Flemish ‘Evangelia Festivalia,’ or the Gospels for the Feast days of the year. Written on vellum in a bold, liturgical black letter, this is from a book which is made in the 16th century for the use of Chic[h]ester Cathedral in England….” Text is from the second chapter of Matthew."


We only have a few explicit indications of textual contents for the leaves that I have traced, but one page has a rubric indicating that it is the beginning of Epiphany; and the readings for Feria II and Feria III on two other leaves correspond to those of Feria II and III after Easter in the Sarum Missal.

Although I can see why the 1938 cataloguer attributed the manuscript to Flanders, presumably based on the style of border decoration, derivative versions of Flemish borders were used in England in the late 15th and early 16th centuries. One example is the extraordinary early 16th-century Bute Hours sold by Sotheby's a few years ago: 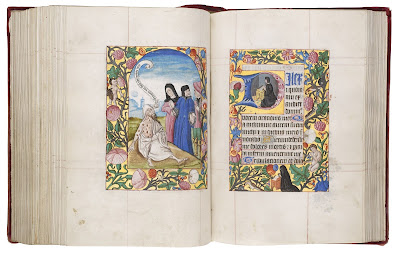 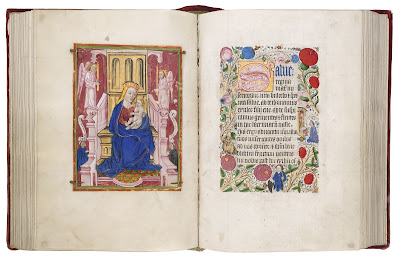 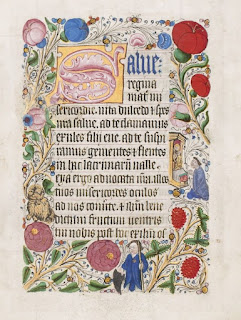 If the manuscript was broken-up by Dawson's Book Shop between June 1938 and 1941, and it had 54 leaves, the others are doubtless waiting to be recognised, mostly in US collections (it is unlikely that many, if any, were sold to European collectors during 1939-1945). Many will presumably have an inscription on the leaf or the mount mentioning "Evangelia Festivalia" and/or "Chichester Cathedral", so they should be easy to identify. Probably some readers of this blog either own a leaf, or know where one is -- please let me know!

Edit 31 May 2020:
Christopher de Hamel has been in touch, and kindly provided three more references.

Here it is described as having 21 (not 31) leaves with borders.
He also reports that a bifolium, including the crucial reference to the feast of the translation of 'our patron St Richard bishop & confessor', was auctioned by Skinner, Boston, 23 July 2019, part of lot 128: 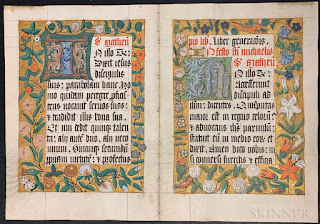 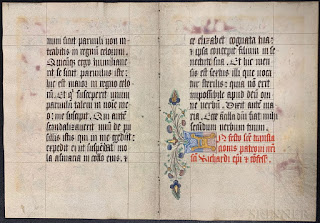 Additionally, he points out that a leaf is reproduced in Judith Oliver, Manuscripts Sacred and Secular (Boston, 1985), no. 61, belonging to the Endowment for Biblical Research [which was dispersed by Bruce Ferrini and others, c.1988]: 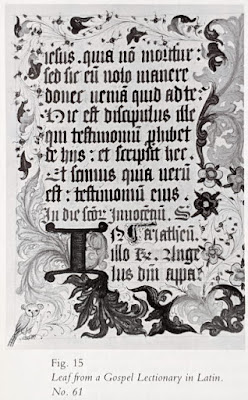