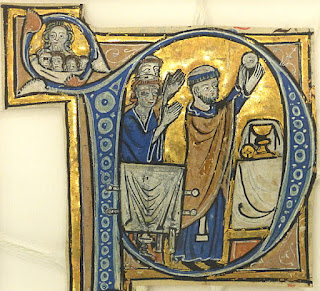 A couple of years ago I spent a week at the Lilly Library to photograph all their leaves and cuttings, and have periodically been using those photos in blog posts (e.g. Beaupré Antiphonary leaves, here, and Dominican Lectionary leaves, here).

One discovery that is long overdue to share, is a group of cuttings from a well-known and important Psalter-Hours, among the Library's manuscripts collected by Coella Lindsay Ricketts (d. 1941).

The majority of the cuttings from the mid-13th-century parent manuscript were studied by Judith Oliver thirty-five years ago: "Medieval Alphabet Soup: Reconstruction of a Mosan Psalter-Hours in Philadelphia and Oxford and the Cult of St. Catherine", Gesta, 24 (1985), pp. 129-140 [available (with a subscription) through JSTOR]. One large group she discusses is at the Free Library, Philadelphia, part of the collection of John Frederick Lewis (d. 1932); it comprises dozens of small foliate initials: 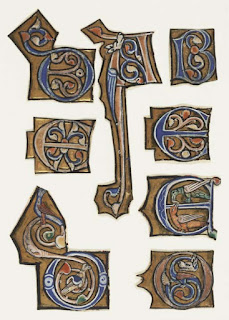 and a handful of large historiated initials: 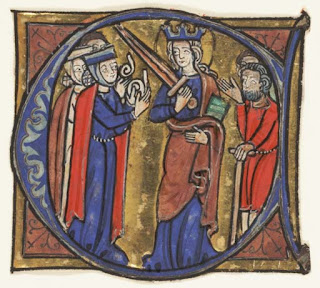 Another group is in a scapbook in the Douce collection at the Bodleian Library, Oxford. Whereas the Philadelphia group have been trimmed close to the edge of the decoration, the Douce ones have not been trimmed. The small foliate initials have been arranged alphabetically: initial "A"s followed by "B"s, "C"s, etc.; here are some of the "D"s: 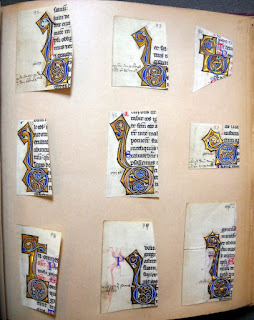 Because they are not trimmed, this group preserves significant amounts of text, and the larger cuttings also give a good idea of the mise-en-page; we can see from the one on the left here, for example, that the parent volume had 23 lines of text per page: 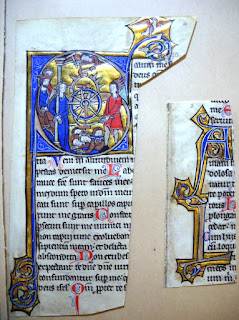 and from this one we get an idea of one form of marginal decoration: 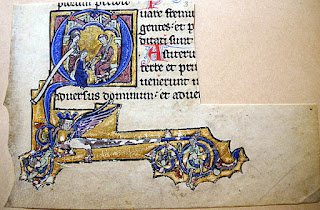 Another initial from the same manuscirpt turned up about 15 years ago, and became the subject of an article by William M. Voelkle, "More Medieval Alphabet Soup: Another Unique Catherine Initial from the Mosan Psalter-Hours", in Tributes to Lucy Freeman Sandler: Studies in Manuscript Illumination (London, 2007), pp. 63–65; and then in the Arcana sale, part III, at Christie's, 6 July 2011, lot 1:

In addition to the "known" ones, there are three previously unpublished initials at the Lilly Library: 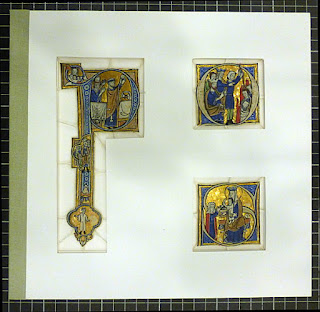 Fortunately, they are mounted so that the text on the back of each can easily be read and identified: 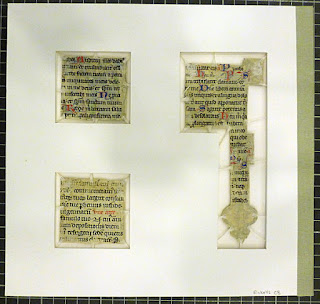 The first shows the Elevation of the Host by a priest performing Mass (a detail of which is at the top of this post):

The stem of the letter "P" has three subsidiary scenes; at the bottom is a tonsured figure ringing the Sanctus Bell: 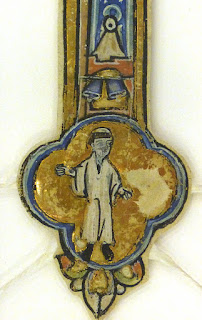 In the middle is the congregation, a group of laymen and women: 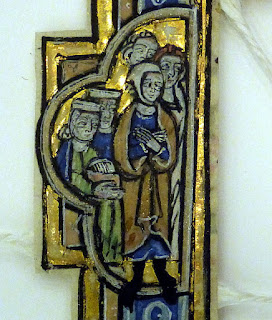 And at the top is God with souls in heaven: 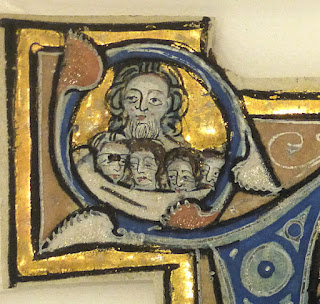 The next Lilly initial, an "S", shows a woman wearing a veil, kneeling before the Virgin and Child: 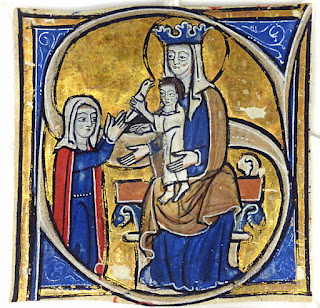 The text on the back appears to be part of two prayers for the dead. The second is written for a male ("famulo tuo .N."): 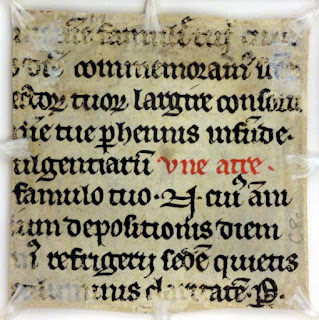 The text of the prayers must have been something like this:

Although it is a bit hard to see, the masculine Latin forms on the top line ("famuli tui") have superscript letters "e" above their final letters, to allow the reader easy conversion into feminine forms ("famule tue"):

But it is not clear to me exactly what is depicted in the initial, or what text it introduced. It seems that the kneeling woman (nun?) is giving the white bird (representing her soul?) to Christ. 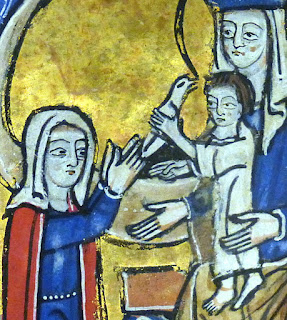 If the prayers for the dead on the reverse come from the end of the Office of the Dead, as seems likely, then they are presumbly on the recto, and this initial, on the verso, introduced whatever followed.

The last Lilly initial shows a king directing three men to be burned in a fire: 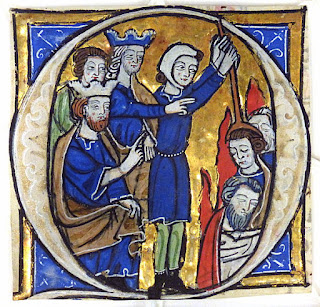 We might assume that this depicts  the popular story of the Three Hebrews in the Fiery Furnace [Wikipedia], but several details suggest otherwise.

First, the three man have closed eyes, indicating that they are dead. Second, the king seems to be accompanied by a queen, who extends her hand in the standard gesture of blessing. Third, although at first sight the initial appears to be an initial "O", a closer look shows that there is the tail of a "Q" to the lower left, and the text on the back of the cutting is from Psalm 50; the initial "Q" must therefore be the beginning of Psalm 51 (Quid gloriaris in malitia) and be on the verso. Psalm 51 is one of the normal major divisions of the psalms in medieval Psalters, and we know from Judith Oliver's work that the iconography of the parent volume placed a special emphasis on scenes involving the virgin queen, St Catherine of Alexandria. (In her 1985 article Oliver noted that the Psalm 51 initial was as yet unaccounted for, and identified the following major psalter initial, Psalm 68, as depicting St Catherine's torture on the wheel). It therefore seems certain that the initial depicts the story from Catherine's life in which Emperor Maxentius summoned fifty wise men to dispute with her about her Christian beliefs: when they failed to outsmart her, Maxentius had them thrown into a fire while Catherine assured them of the rewards of martyrdom.

The three Lilly cuttings discussed here are not among the 100 highlights of the  collection in Christopher de Hamel, Gilding the Lilly: A Hundred Medieval and Illuminated Manuscripts in the Lilly Library (Bloomington, 2010), and nor, as far as I can see, are they included in the list of Ricketts manuscripts published by de Ricci in his Census, and there did not seem to be any information about their provenance on the Library's index cards. The parent manuscript must have been cut up during the lifetime of Francis Douce (d. 1834) [Wikipedia], but it seems that a large tranche re-surfaced on the market in the first decades of the 20th century, perhaps with a London dealer such as Tregaskis, from whom John Frederick Lewis (d.1932) of Philadelphia, and Coella Lindsay Ricketts (d.1941) of Chicago, are known to have bought illuminations.
Posted by Peter Kidd at 16:33