Unnoticed Leaves from the Beaupré Antiphonary

The surviving volumes of the Beaupré Antiphonary perhaps comprise the most famous choirbook of the Middle Ages, made in 1289-90 for the Cistercian nunnery of Beaupré, near Grammont in the diocese of Cambrai. It has been described as "one of the great monuments of gothic art" [1].

The volumes have had a succession of illustrious modern owners, including John Ruskin, Henry Yates Thompson, Alfred Chester Beatty, and William Randolph Hearst; it is now at the Walters Art Gallery, Baltimore (MSS W.759-762), where it has been fully catalogued and digitized.

When John Ruskin owned it, he extracted a number of leaves to give to friends. A few of them contained major decoration, but most were much more ordinary-looking text leaves, and these occasionally appear on the market.

This leaf, for example, turned up in an antique shop on the Isle of Wight (it is presumably no mere coincidence that the Isle of Wight is home to Bembridge School [Wikipedia], which owned a major collection of art, manuscripts, printed books, and other memorabilia relating to John Ruskin); it was sold at Sotheby's in 1988 to a Belgian private collector, who resold it in 2015:
Each page is laid out with eight lines of text and music in square notation on four-line red staves. Two distinctive features by which leaves from the Beaupré Antiphonary can most easily be recognised, exemplified here, are the post-medieval pagination in arabic numerals:

and the form of the larger decorated initials, which are of a type peculiarly characteristic of manuscripts made in the later 13th century in the area of Cambrai/Tournai/Lille/Arras: 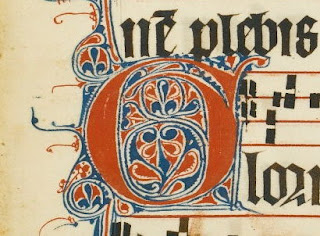 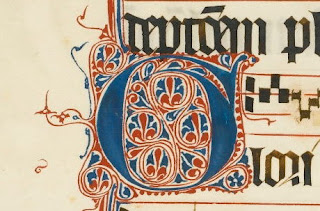 Manuscripts with this style of initial were first identified and studied in detail by Alison Stones in “The Minnesota Vincent of Beauvais Manuscript and Cistercian Thirteenth-Century Book Decoration”, The James Ford Bell Lectures, 14 (Minneapolis, 1977).

In addition to the 17th/18th-century [2] pagination in arabic numerals in the top outer corners, which run throughout the volumes, leaves were also foliated in late-medieval roman numerals in the fore-edge margin of rectos, with the numbering re-starting at the beginning of the Common in each volume. Last year I was able to take photos that clearly illustrate these paginations and foliations on the Lilly Library's seven Beaupré Antiphonary leaves:

I was in Cambridge at the beginning of this week, and spent some time at the University Library looking through illuminated cuttings, single leaves, and binding fragments, a list of which Stella Panayotova had compiled when she was working on the catalogue of the Library's illuminated manuscripts [3], and which she kindly shared with me. Some of the illuminated items have since been published in her ongoing series of catalogues of illuminated manuscripts in Cambridge collections [4], but others (especially the unilluminated leaves and the large number of binding fragments) understandably remain uncatalogued.

Two leaves that seem to have eluded recognition are among a miscellaneous group which comprise MS Add. 6219: 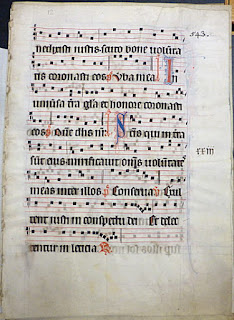 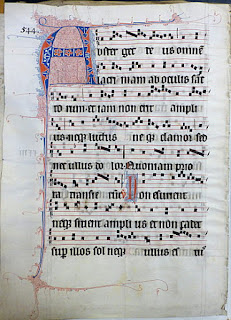 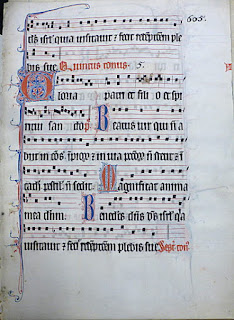 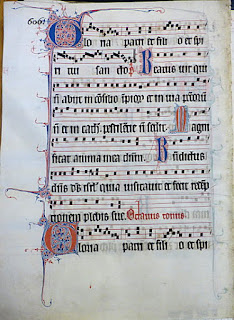 They are each written with eight lines of text and music on four-line staves, and their pagination and the style of their initials leaves no doubt about their parent volume: 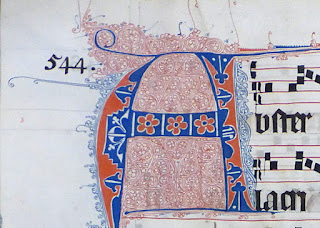 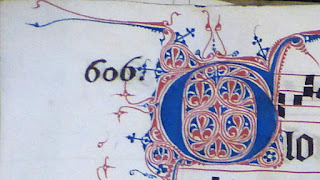 The presumed existence of the first of these leaves, paginated 543 and 544, and containing the responsory "Absterget deus", is recorded in Lilian Randall's catalogue description [5] of MS W.761 at the Walters Art Museum:

The existence of the other leaf was not previously postulated, because the highest page number previously known was "602" (the ex-Sotheby's leaf shown above), and it was uncertain what, if anything, followed it.


The provenance of the Beaupré volumes has been described in detail in print a number of times (and is summarized online here). These particular leaves belonged to Alexander Gordon Wynch Murray, Librarian of Trinity College, Cambridge, who died aged only 34 in 1919.

[2] L. Randall, "The Fragmentation of a Double Antiphonal from Beaupré", in Interpreting and Collecting Fragments of Medieval Books (Los Altos Hills and London, 2000), pp. 210-29 at p.216 n.17, reports Michelle Brown's opinion that the pagination is pre-1700; de Hamel (as above) suggests (more plausibly, in my opinion) that the pagination was added during the time of Abbess Angéline de Lossy, 1755-96.

[4] S. Panayotova, et al., A Catalogue of Western Book Illumination in the Fitzwilliam Museum and the Cambridge Colleges (London and Turnhout, 2009- ).