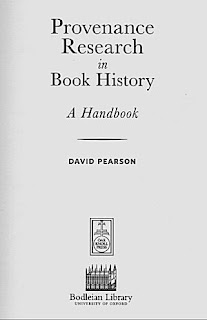 The first edition of David Pearson's, Provenance Research in Book History: A Handbook (1994) has been a frequent source of help to me since 1994, and I am delighted that a new revised edition has just been published.


Relevant to my post yesterday, Pearson devotes a whole chapter to bookplates and book labels (pp.68-112). Here are two of the pages in which he discusses and illustrates some of the types of bookplate mentioned in that post (as usual, click the image to enlarge it): 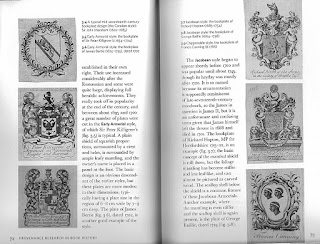 The new edition does not seem to be available through Amazon.com yet, but is on Amazon.co.uk at £55: a modest increase on the £40 price of the original 1994 edition and its 1999 reprint, and considerably better value than the cost of buying the older editions second-hand!:

Despite what I wrote in the original blogpost, it seems that the book is not officially published until April. I have been sent a review copy; the review should appear in the Autumn issue of the Book Collector.
Posted by Peter Kidd at 21:07