British bookplates are often identified by the name "Franks" and a number.

This refers to the catalogue of the collection of bookplates bequeathed to the British Museum by Augustus Wollaston Franks (1826–97) [Wikipedia]:

This is available online in several digitized copies, of which perhaps the best is the one scanned by the University or Toronto:
The catalogue entries are by necessity very succinct, but quite easy to use once one understands their conventions.

In brief, the information is presented in three columns:

Here, for example, chosen at random, are five bookplates used by a single man: his name is given as "W. D. Wilson" on the first (and the arms are described as "Wilson quartering Dobie"), and in full as "Wilson Dobie Wilson" [Wikipedia] on the others: the second is a reworking of the first; the third is a reworking of the second; the fourth is printed in blue; and the last has a different overall design:

Let's suppose that we are studying a book that contains this bookplate: 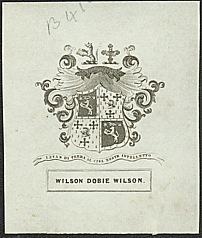 At present, I am not aware of any shortcut, and the only safe way is to go and consult the original bookplates at the Franks collection itself in the British Museum Department of Prints and Drawings.

The Franks collection of bookplates runs to about 35,000 items, mounted in folio-size albums: 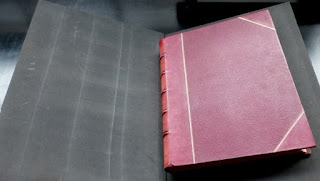 The albums typically have several bookplates per page, on rectos: 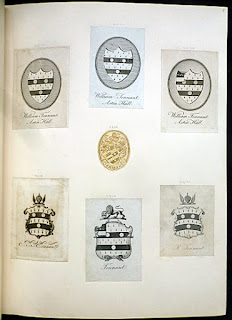 But occasionally additional examples are mounted on facing versos: 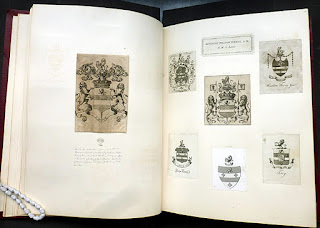 Having variant specimens side-by-side like this allows their differences to be seen easily.

One of the reasons why it can be very important, for provenance purposes, to correctly identify a bookplate, and to consult the originals, is that the variations that are NOT recorded in the catalogue may allow one to work out when the collector acquired a book.

Here, for example, are three bookplates of the collector John Towneley [Wikipedia]: 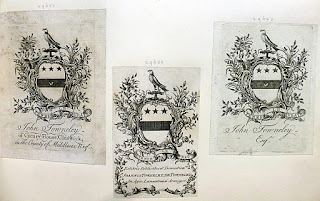 and their descriptions in the catalogue (nos. 29650–29652):
Note that the catalogue transcribes the main text at the bottom of each which is enough to distinguish them from one another; the arms, crest, and motto are not distinguished from one another. The arms of the middle one, however, is different from the other two: it lacks the crescent on the fess, and it also spells the motto differently ("TENEZ LE VRAY" instead of "TENES LE VRAYE").

The crescent in the centre of the arms of the upper two bookplates is the standard English heraldic mark of cadency of a second son [Wikipedia], and its absence from the middle bookplate indicates that by the time this one was engraved, John Townley had inherited his father's estates and entitlement to bear the arms in his own right (his elder brother William [1714–42] having predeceased him). Thus we can be confident (if there is no evidence to the contrary) that a book with the middle example of these bookplates was acquired after 1807, when John's father died.

One caveat is that bookplates have circulated among collectors since well before the time of Franks, and dealers have sometimes removed a bookplate from an inexpensive or damaged book in order to fraudulently add some lustre to another volume. At the time of writing, for example, this bookplate is for sale on eBay:
and it could easily be added to a book which never belonged to Towneley.

When cataloguing manuscripts (and printed books), therefore, if a volume contains a bookplate but there is no other evidence that the collector owned the book (such as a matching entry in an auction catalogue), it is safer and more accurate to state "With the bookplate of ..." rather than of "Owned by ...".
Posted by Peter Kidd at 20:45