An Unpublished English Missal, Made for Sées c.1332 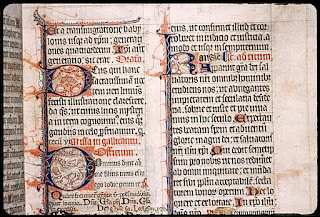 A year ago I downloaded a very large number of images of illuminated manuscripts in French provincial libraries, and have been working through them ever since. Recently, after browsing through thousands of images of French manuscripts, I was surprised to suddenly encounter a series of images of one whose script and decoration is distinctively English.

The manuscript is in the diocesan archives of Sées [Wikipedia], in Normandy. (Confusingly, Sées used to be spelled Séez, and this spelling is still used by the diocese, which can lead to confusion with Séez [Wikipedia] in southwestern France). Digging around a bit, I came to the surprising realisation that it is almost entirely unpublished in print, and online sources consider it to be French.

Looking for information online, I found that:
Unless a reader can correct me, it therefore seems that the manuscript has never been described in print. And as we will see, the brief online descriptions are incorrect, as regards both the place and date of production.

At some point since I downloaded the selected images that were then available, a digitized version of the entire manuscript has been made available on the bvmm website.

Browsing rapidly through these images, I noted that on 16 November the calendar has the English saint Edmund of Abingdon, archbishop of Canterbury, highly-graded with 12 lessons:
which seemed to support my impression of an English origin, but the calendar also contains saints that one would not expect to find in an English manuscript, such as, on the same day as Thomas Becket, St Ebrulf, abbot of St-Evroul in Normandy:
St Ebrulf was the founder of several religious houses, one of which to become the abbey of St-Martin at Sées [Wikipedia].

Similarly, flanking St Edmund in November are two highly-graded feasts of St Martin: his main feast (11 November, in blue, "D"(uplex)) and its octave (18 November, also in blue, "In capis"): 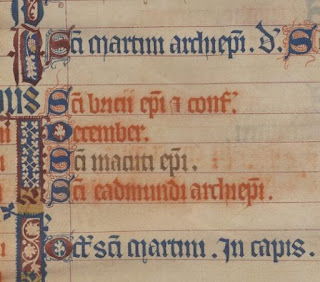 Browsing through the main text and pausing at pages with major decoration, I noted that one of these is for the feast-day of St Martin:
Scrolling to the end of the manuscript I was astonished to find that it has a long rhyming verse colophon on the final leaf: 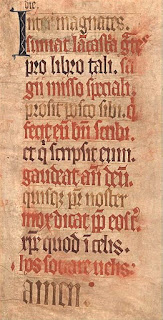 The verso has a sort of continuation or addendum (somewhat difficult to read because the red ink of the inscription above bleeds through the page): Roger's second name, and the word(s) following Ralph's name are not clear, but as he is described as Prior of Lancaster, it is possible to identify Ralph: Lancaster only had one 14th-century Prior named Ralph, so it must be Ralph Courait/Courrat, who was instated in August 1328 and was dead by 27 July 1337:

This gives us a rather precise date for the production of the manuscript: within 5 years before or after the of summer 1332.

Having made this identification, we can now deduce that the damaged area in the third line of the colophon originally contained the start of Ralph's surname, spelled "Currat":
It turns out that the colophon is in fact published by the Benedictines of Bouveret in Colophons (no. 16,796), apparently transcribed from a footnote in the Catalogue général (vol. II, p. 471), with both of them misreading "Currat" as "vir erat".

But why would an English prior commission such a luxurious manuscript for an abbey in Normandy?  This puzzle was quickly solved: St Mary's Lancaster was an alien priory of St Martin's, Sées:


"The priory of Lancaster was founded by Roger of Poitou, in the reign of William Rufus, as a cell of the Benedictine Abbey of St. Martin at Sées in Normandy. [Source]

In a subsequent post I will look more closely at the text and decoration.

[1] The only copy of this thesis listed online is at the IRHT, Paris. I contacted Hanno Wijsman of the IRHT who reported that the text volume of the thesis is currently mislaid. He also tells me that the Sées manuscripts were studied by Guy Lanoë more than a decade ago, but this work remains unpublished. More recently, a team at the IRHT have been working on new descriptions of the Sées manuscripts, and it is in relation to this project that the Missal has been fully digitized. The project has a blog here.
Posted by Peter Kidd at 12:53