A Second Holford Cutting in Lisbon

Before doing the promised review of the new catalogue of the Gulbenkian Museum's illuminated western manuscripts, today I'll continue the  theme from last week, by discussing a Gulbenkian cutting from the Holford Collection, shown above, whose pre-Holford provenance is still uncertain. It depicts St Benedict, enthroned, surrounded by three sainted popes and five other saints.

As has been recorded in several previous posts, the vast majority of the illuminated cuttings in the Holford collection were in the 1838 Ottley sale; then bound into an album which was bought by Robert Holford by 1843; and dispersed in 1927 after the death of his son, George.

The subject of last week's post was a large miniature from a Florentine manuscript, that was in the Holford Collection but was not in the 1838 Ottley sale: 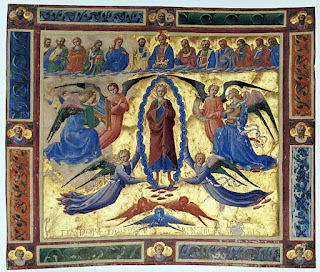 The image at the top of this post shows another such instance. According to several usually-reliable sources such as de Ricci and Francis Russell [1], and the new Gulbenkian catalogue, this was lot 187 in the Ottley sale, where it is described as:

"A Saint, superbly dressed, seated on a Throne"

It is one of a sequence of eight lots all from the same manuscript, correctly attributed to Don Silvestro dei Gherarducci, monk of the Camaldolese monastery of Santa Maria degli Angeli, Florence, although the date in the headnote has a typo, as "1530" is an error for "1350": 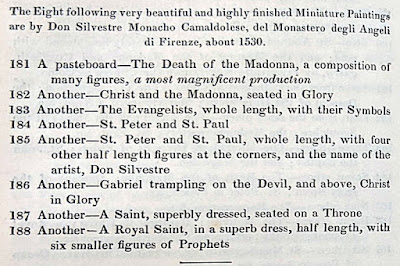 On the face of it, the identification of the Gulbenkain miniature and lot 187 seems reasonable, because we expect ex-Holford miniatures to have come from the Ottley sale.

There are at least four problems with this identification, however.

James Edward Nightingale (1817–92), was a private collector, who is not known to have re-sold any of his cuttings to Holford; all the Holford cuttings were bought at the Ottley sale either by "Tindall" or "Lloyd".

Second, the description of lot 187 -- "A Saint, superbly dressed, seated on a Throne" -- is not a very close match for the miniature, as there does not seem to be anything very rmarkable about the saint's dress, and there is no mention of the other figures -- in contrast, for example, to the next lot, lot 188:

"188  Another—A Royal Saint, in a superb dress, half length, with six smaller figures of Prophets"

Lot 188 cannot be the Gulbenkian miniature either, however, because the description precisely corresponds to a series of cuttings now in Stockholm: 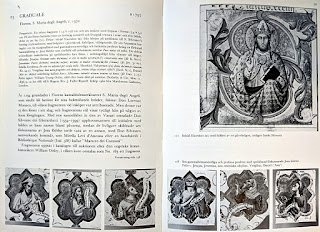 Third, the Gulbenkian cutting does not have to be identified with any of the lots in the 1838 sale, because there is proof that Ottley sold at least three cuttings from Santa Maria degli Angeli during his lifetime, more than two decades prior to the posthumous 1838 auction.

One was offered for sale by Ottley's friend William Roscoe, of Liverpool, in 1816:

It is now at the Walker Art Gallery, Liverpool: 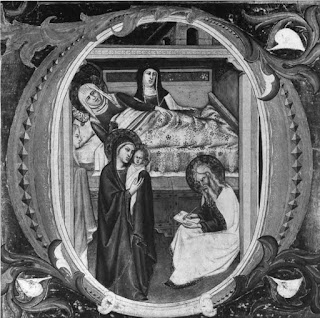 Two others attributed to Don Silvestro (but now thought to be by Lorenzo Monaco), also demonstrably from a from Santa Maria degli Angeli choirbook, were in an auction of Ottley's drawings in 1814: 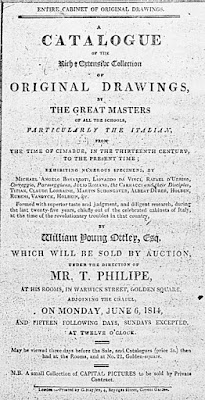 They are now respectively at the Louvre: 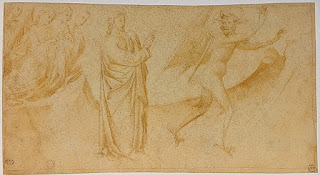 and in the British Museum: 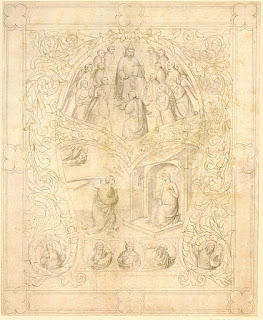 Surprisingly, the authors of the New York 1994 Early Renaissance Florence exhibition catalogue, and the 2011 Louvre illuminations catalogue, did not know about their Ottley provenance. [2]
A fourth reason why the Gulbenkian miniature cannot be lot 187 in the Ottley sale, "A Saint, superbly dressed, seated on a Throne", is that this cutting survives elsewhere; it has very recently entered a Swiss private collection: [3] 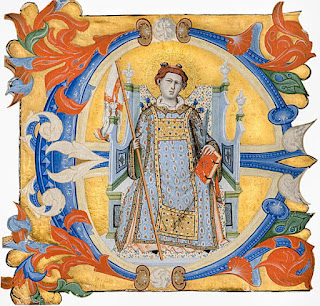 It now becomes clear why the 1838 cataloguer described the figure as "superbly dressed": 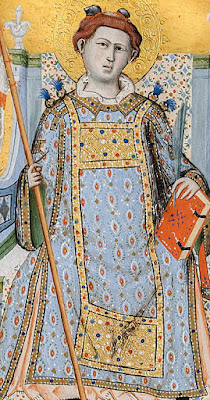 a description that could hardly be applied to the Gulbenkian miniature: 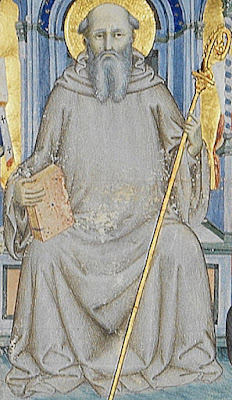 The result of all this is to confirm that, although the Gulbenkian cutting was undoubtledly brought from Italy to England by Ottley, it was not in the 1838 auction. Like the miniature discussed last week, it must have taken another route into the Holford collection, which still needs to be ascertained.
I should not leave the reader with the impression that the identifications made above are my own discoveries; the mistake by de Ricci and repeated by later writers was pointed out by Gaudenz Freuler as long ago as 1997, but I have thought it worthwhile to lay out the evidence because the confusion apparently persists. [4]
Notes
[1] de Ricci, Census, II (1937), p. 1932, and Francis Russell, ‘Don Silvestro Dei Gherarducci and an Illumination from the Collection of William Young Ottley’, The Burlington Magazine, 119.888 (1977), 192–95 at p. 195 n. 6.
[2] Painting and Illumination in Early Renaissance Florence, 1300-1450, ed. by L.B. Kanter and B.D. Boehm (New York, 1994), no. 35;
Les enluminures du Louvre: Moyen Âge et Renaissance, ed. by F. Avril, N. Reynaud, and D. Cordellier (Paris, 2011), no. 24.
[3] I am grateful to the new owner for sending me images.
[4] Gaudenz Freuler, A Critical and Historical Corpus of Florentine Painting, Vol. VII, Tendencies of Gothic in Florence, Pt. 2: Don Silvestro dei Gherarducci (Florence, 1997), p. 380:

Further confusion has been caused by the suggestion that lot 186 in the 1838 Ottley catalogue, which is listed among the cuttings reliably attibuted to Don Silvestro, is instead a leaf from the Laudario of Sant’Agnese illuminated by Pacino da Bonaguida, see Florence at the Dawn of the Renaissance, ed. by C. Sciacca (Los Angeles, 2012), cat. 45.11. Ottley lot 186 ("Gabriel trampling on the Devil, and above, Christ in Glory") is in fact a cutting now in the Abegg-Stiftung, as correctly stated by Freuler, 1997, p. 386, and reproduced in colour in the front cover: 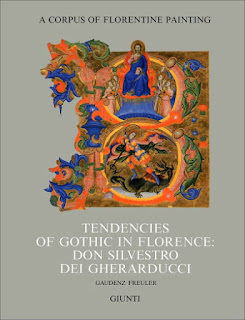