As mentioned in the previous post, much of my earliest research on illuminated manuscripts concerned 13th-century English Psalters, and although I have not published much on the subject, I have always maintained an interest in them. I was therefore glad, several years ago, to be able to spend some time examining the so-called Whitby Psalter at the Houghton Library (of which an image is shown above).[1]

The Psalter is now very incomplete: the Houghton has a bound portion of just 28 leaves, but in the past several years I have found several more, and have long intended to do a blogpost. I found another recently, and this has spurred me into action.[2]

The Psalter takes its conventional name from an inscription added in the 19th(?) century at the bottom of the final page of the text:

A northern English origin is certain because of three features. First, the male saints in the litany include this series:

Second, the petitons that follow the litany of saints refers to an archbishop. In most such series of petitions a bishop is mentioned at this point, but the diocese of York is (from AD 735 onwards) the only English diocese (apart from Canterbury) that has an archbishop, so they amend the wording of the petiton accordingly:And third, St Hilda apears among the female saints, presumably the main reason for the incorrect attribution to the abbey of St Hilda, Whitby:
The Houghton portion of the Psalter was known only from auction catalogue descriptions until it was acquired by Harvard in 2006, but once it resurfaced and became availabe for study, "The litany on ff. 25r-28r on examination has turned out to be a secular text of the us of York and in no way connected with Whitby".[3]
The manuscript first appeared for sale offered by J. & J. Leighton, Catalogue of Manuscripts, Mostly Illuminated (London, 1912), no. 259 (ill.), and a clipping from the catalogue is inserted:

The Leighton firm's master-copy of the catalogue (now also at the Houghton Library) is annotated in the margin to record that it was bought by "Moss":

The earlier provenance of the manuscript is more interesting; it was owned by an intrepid Victorian woman.

The front cover of the 19th-century binding has a metal plaque engraved “K B Starkie”:

There are a few male names beginning with “K”: Keith, Kenneth, Kevin are perhaps now the most common, but these were less common in 19th-century England than female names such as Katherine and Kathleen. It is therefore likely that it was made for Katharine Blanche Starkie, daughter of Professor Thomas Starkie (1782–1849), Q.C., Downing Professor of Law at Cambridge. She must have owned it before she married Rev. Lowry Guthrie in 1846. They had a daughter in July 1847, but her husband died six months later, in January 1848 (aged only 32), and her father died the following year. Having only one sister and no brothers, she presumably came into two inheritances in quick succession. She appears to have spent part of the rest of her life comfortably wealthy, and able to travel extensively.

In 1874 she published a travelogue memoir, Through Russia: From St. Petersburg to Astrakhan and the Crimea, stating in the Preface that “My daughter and myself left London with the intention of studying the Art collections contained in the museums of Dresden, Berlin, Copenhagen, St. Petersburg, and perhaps Moscow …”.

Three years later, in 1877, she published My Year in an Indian Fort (online here), at the beginning of which she lists her travelling party as including:

“three children, three nurses, two Irish setters, a terrier, and two goats. [...] Dogs not being allowed in the saloon, my poor Bustle was ruthlessly ordered off to Mr. Needles, the butcher, under whose care he was placed” (pp. 2-3).

If Katharine did not sell or give the manuscript away during her life, it presumably passed, when she died in 1883, either to her daughter or to one of her two grandchildren. It was perhaps from one of them that J. & J. Leighton acquired the volume c.1912.

The single leaves that I have found so far (listed on a page here) must have been separated before 1846 (see above) and were presumably bound separately: some of them have a 20th-century foliation in the lower right corner of rectos that extends to at least "48", and apparently into the 50s, showing that many more leaves are still to be found.

Although the Psalter is probably closer in date to 1275 than 1300, I can understand how a cataloguer in 1932 might date script and decoration like this to the early 14th century: 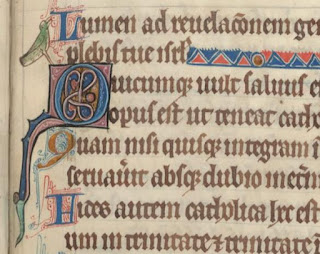 I therefore wonder if the now-loose leaves might possibly have formed part of a volume in the collection of John Meade Falkner. One item in his posthumus sale is a pretty good match: the dimensions correspond, and at only 96 leaves, and with only 5 of its expected 10 large initials, it was probably very imperfect (the 150 Psalms, plus canticles, litany etc., and calendar, usually occupy at least 150 leaves):

Falkner was especially interested in liturgical manuscripts, and could for this reason have been attracted to a book with a calendar for the use of York.

Bill Stoneman, who has worked on the Falkner MSS, tells me that the above lot is now Claremont Colleges, Crispin MS 5, and with this information we can see that it is not the same as the Whitby Psalter. (The Crispin MS is written in 2 columns of 25 lines, and there is a description and images in the 1986 Claremont Colleges catalogue by Consuelo Dutschke).

[1] The Houghton volume is digitized here.

[2] My original work on the Psalter in 2014 ran in parallel with, and partly overlapped, work being done by Michael Kuczynski; his main focus is the 19th-century transcriptions of Middle English texts added at the end, and mine is the original 13th-century Psalter.