More Leaves from the MdM and AdM Hours

During my recent trip to the US I visited the Memorial Art Gallery of the Univeristy of Rochester (NY), and was able to examine the leaf of the Book of Hours which has the initials MdM and AdM in the borders, about which I wrote in this post.

The online image had been good enough for my purposes but is not very high quality, and the margins are cropped to produce a nearly square image: 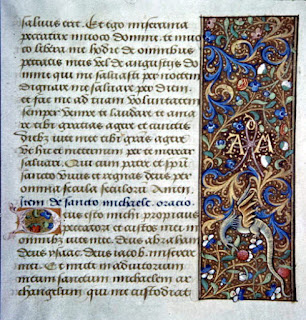 I saw that the whole leaf has wide margins and pleasing proportions: 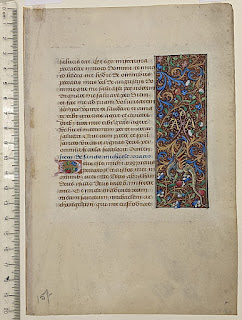 With the margins visible, we can see an English bookseller's price, "15/-", i.e. 15 shillings, in the lower left corner: 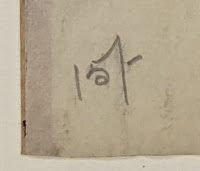 Both recto and verso have the initials "AdM": 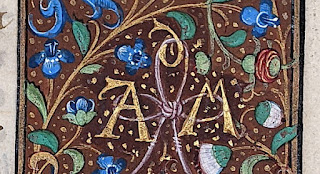 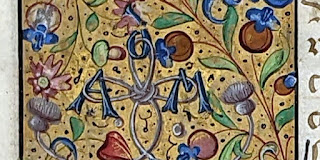 The sister-leaf at McGill that I reproduced (image here) does not have a price, but it has a pencil price-code "ao", characteristic of Maggs Bros.: 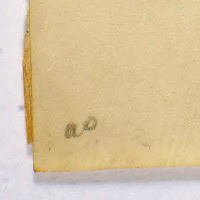 We can therefore assume that one or both leaves were sold by Maggs before the UK switched to decimal currency in 1971. In fact, we can deduce from the accession number, 28.442, that the Rochester leaf was acquired as early as 1928. [1]
The week after visiting Rochester I visited the Toledo (OH) Museum of Art, and was pleased to find another leaf of the same manuscript, with a small miniature: 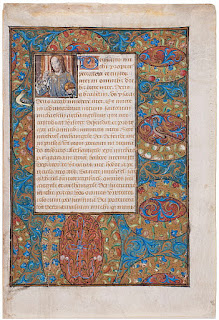 Even though the online images are rather good, I had not peviously realised the connection; because of the way the photo had been taken, the initials in the lower border are barely visible, even when the image is at 100% size: 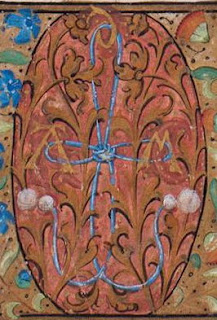 But when I saw the leaf in the original, and was able to angle it so that the light caught the gold, the initials became much more visible:
The lower left corner has another Maggs price-code: 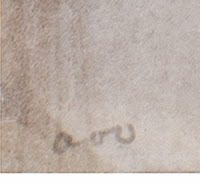 The accession number, 1926.20, suggests that it was acquired a couple of years before Rochester bought their leaf.
I have a couple of Maggs catalogues from the 1920s and it only took a few minutes to locate further leaves, items 1159 to 1162 in Catalogue 437, Books of Art and Allied Subjects (1923), the first of which is reproduced as plate LXI: 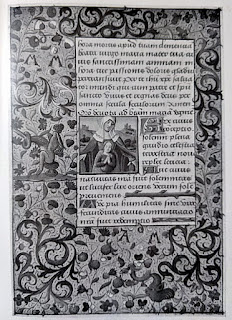 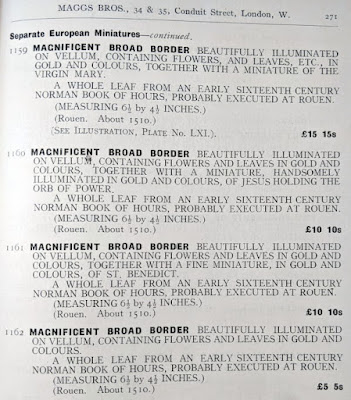 From these descriptions we now know that the parent manuscript at least three small miniatures:
and we know of three or four leaves without a miniature:
The manuscript may have been very incomplete by the time that Maggs acquired their leaves, but it must originally have had further small miniatures for other suffrages to saints, and probably large miniatures for the usual Hours of the Virgin, Pentiential Psalms, Office of the Dead, etc.
The text of the leaf McGill MS 104.1 is part of the very rare Hours of Mary Magdalene, which sugggests the possibility that the female owner of the book, the "M" of "MdM", was named Madeleine.
Note
[1] In fact, as I only realised after writing this blogpost, the McGill leaves were acquired from Maggs between 18 July 1923 and 22 May 1924, as recorded by Richard Virr, "Exemplars: Medieval Manuscripts in Montreal and the McGill University Library Collection of Books of Hours", Renaissance and Reformation / Renaissance et Réforme, vol. 39 no. 4: Enquêtes sur les livres d'Heures conservés au Québec (2016), pp. 73-105, at p. 97 n. 86.
Posted by Peter Kidd at 07:44