Initials from the Murano Gradual, Now at Reims 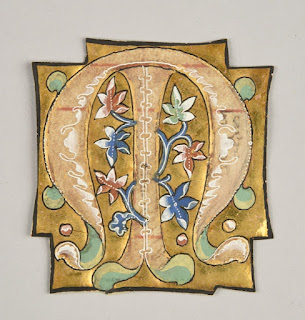 I have just found a clutch of a dozen more foliate minor initials from the Murano Gradual (about which I wrote in March, here) at the Musée Saint-Remi, Reims. It is notable that some of them are cropped right to the edges of the illumination, as in the example above; all twelve are shown below.

One of the interesting things about this group is that they were demonstrably in France by 1858; they were sold at auction in that year, by Régnier, Reims, Catalogue des livres, manuscrits, gravures et curiosités de feu M. Auguste Duchesne, numismate à Reims ... commencera le mercredi 26 mai 1858 [1]. The earliest previously-known appearance of such initials for sale was also in 1858, in the London sale of Mathew Gutch (see this blogpost).

It may in future be possible to identify the Duchesne and Gutch initials with auction lots such as Christie's, 10 April 1843, lot 13:

I have added the Reims cuttings to my list here (bringing the total up to about 290 initials), and made a few other updates/corrections. 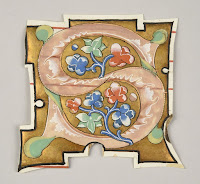 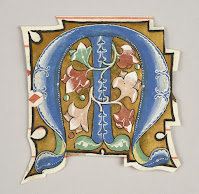 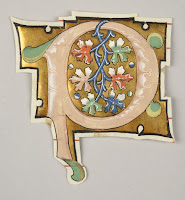 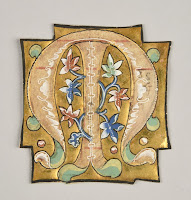 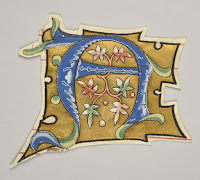 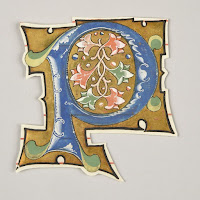 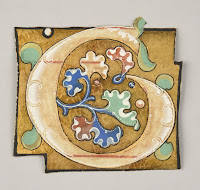 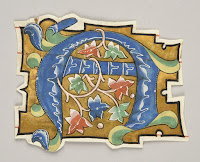 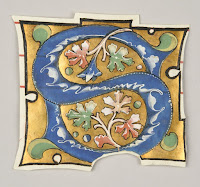 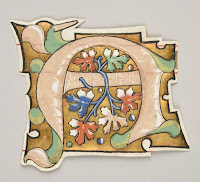 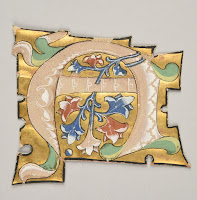 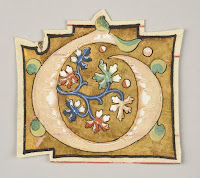 [1] I have not been able to locate a copy of this catalogue. There is apparently no copy recorded in Worldcat, the Grolier Club's online catalogue, or in Jeanne Blogie, Répertoire des catalogues de ventes de livres imprimés, II: Catalogues français appartenant à la Bibliothèque royale Albert Ier (Brussels, 1985).

I also realised soon after posting the above blogpost that the Reims initials had in fact been published, correctly identified by Maxence Hermant, in the exhibition catalogue: Jan Fabre ... illuminations, enluminures: trésors enluminés de France, Lille, Palais des Beaux-Arts, 7 nov. 2013-10 février 2014 (Editions Invenit, 2013), no. 36, but they were in fact not included in the exhibition itself.

Mea culpa: a reader has pointed out that these Reims initials were, in fact, listed in the 2021 article by Azzarello & Keene (p. 267), although three of them are misidentified: 978.28406, .28412, .28413 are all 'A's, not a 'V' and two 'N's as they state. I had somehow omitted them from my own list of initials, and thus wrongly thought that they were a 'new' find when I came across them recently, in relation to the subject of a future post, but as mentioned above, they have been widely known since the publication of the 2013 Lille exhibition catalogue.