The main clue to the origins of the Ghistelles Hours (as I will continue to call it) is its first quire, which was owned by Rosy Schilling, and sold after her death at Sotheby’s, 5 December 1994, lot 20: 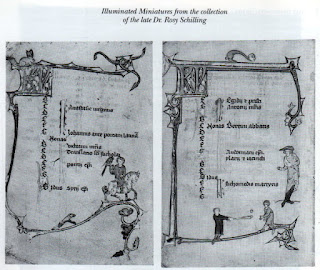 It was resold at Sotheby's, 1 December 1998, lot 17, and is now at the Walters Art Museum, Baltimore; I am very grateful to Lynley Herbert of the Walters for her help in my investigations.

The the calendar itself is rather disappointing in terms of what it tells us about the origin of the manuscript: the saints point to a rather large area of south-west Flanders and far-north France, but it does not include entries, as far as I can tell, that point strongly towards a specific town, such as Bruges or Tournai. [1]

Following the calendar, however, are two more leaves that are considerably more informative, but have apparently never been reproduced. The first is a list of the dates on which Easter falls in each year from 1300 to 1316, inclusive, in French: 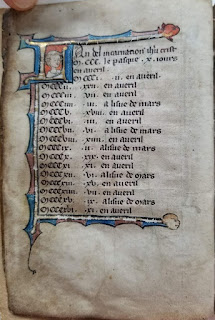 All seventeen dates are correct.

The facing page is even more unusual, and provides clues to the patronage of the manuscript.

In a dozen lines of French, the page provides a list of four major fairs, when merchants would convene to buy and sell their goods: 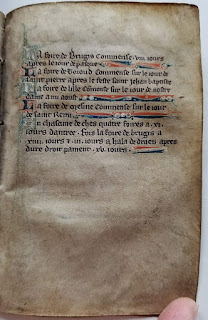 Some of this deserves explanation.

Three of the four fairs were held on fixed dates, but that at Bruges was dependent on the date of Easter: this explains the need for the list of Easter dates on the facing page. According to published sources [2] each fair began with a period (according to our manuscript, ".xi. iours d'antree") during which the merchants arrived, settled into their lodgings, and set up their stall. No sales were permitted until the town crier announced the official start of the fair, and for the next several days only cloth could be traded. After this the sale of leather goods and furs was permitted, and finally the sale of spices and bulkier local products began. The Bruges fair was also used as the standard point in the year when debts had to be paid or refinanced.

The four place-names have caused some confusion in the past ("Toroud" has been misinterpreted as St Trond, for example), but the known cycle of fairs leaves no doubt that this refers to Torhout.

Placed in chronological sequence through the year, Bruges-Torhout-Lille-Mesen, it can be seen that the distance from each fair to the next was not large, totalling under 100km for the whole journey, which might be spread over a period from about Easter to October: 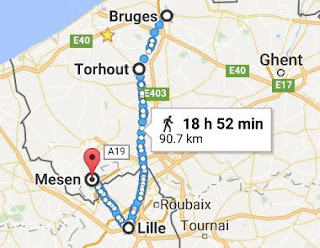 In the map above, the unnamed gold star to the west of Bruges and Torhout marks Gistel; it is only about 15km from Torhout: 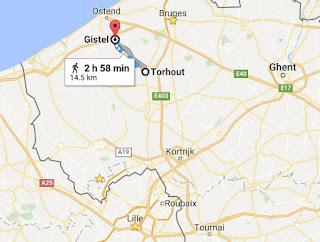 and about 20km from Bruges: 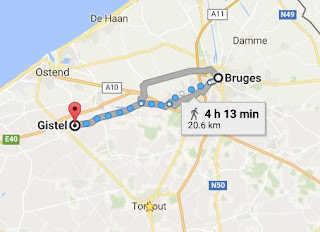 It seems to me perfectly possible that an illuminator who had lived, trained, or travelled in this general area could have known the arms of Gistel, and used it for merely decorative effect when confronted the task of illuminating a manuscript that required a hundred or more margins to be filled.

It also seems plausible that the patron of the manuscript, rather than being an aristocrat such as John III, Lord of Gistel, was someone whose main business was transacted at the fairs. He may not have been a merchant in the sense that be bought and sold goods, he might instead have been one of the growing number of "financial services" specialists who were required for the smooth running of the fairs, primarily for currency exchange, since the fairs attracted traders from at least as far afield as France, the Low Countries, and Italy. If this is correct, it may be relevant that at least two leaves of the manuscript depict Jews, who are likely to have been known for their money-lending services. 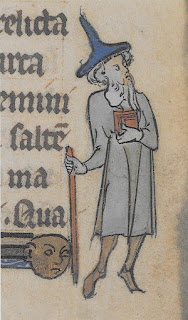 The fact that the patron of the manuscript had his list of Easter dates and market fairs written in French (with Picard spellings such as "ches" for "ces") rather than in Dutch/Flemish, perhaps suggests that he came from the southern part of our target area: i.e. perhaps closer to Lille than to Bruges.

In the 13th century the four fairs that are listed in the manuscript were part of a regular cycle of five, the fifth being at Ypres. [3] I do not know why it is omitted. Even if the owner of the manuscript had some reason not to attend the annual Ypres fair, one might expect that he would want a memorandum of its date. Or perhaps he lived in Ypres, and knew the date so well that he did not need to have it written down? 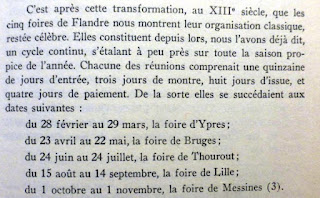