Cuttings Related to the Missal of Leo X

In a series of previous posts (e.g. here) I have been gradually finding dispersed cuttings from a Missal of Pope Leo X.

I recently looked, for the first time in more than a decade, at the catalogue of the Holford Collection, published in two volumes in 1927: 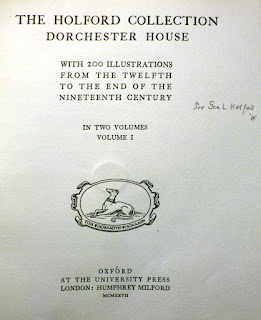 There is lots of interest in the catalogue, but what caught my eye most was catalogue no. 47, represented by a plate which shows nine cuttings, eight of which are very similar to those I have already found, and a ninth representing the Trinity:
To my eye, the quality is not as good as those previously found, and the style, though similar, is not identical. If we compare similar scenes side-by-side, other differences are apparent, such as the presence or absence of the characteristic Medici-emblem wall-hangings that originally allowed me to recognise the Vassar College cuttings as coming from a manuscript of Pope Leo X:

It is as if an assistant has not realised the significance of a detail in his exemplar, and has simplified it. But there is an alternative explanation.

The group is described in the Holford catalogue as representing Rodrigo Borgia, who was Pope Alexander VI from 1492 to 1503: 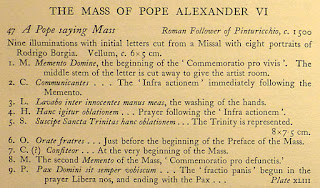 So if these illuminations really do pre-date papacy the Leo X Missal and belonged to his predecessor, this would explain the difference in style, as well as the absence of the Medici emblems.

The fact that the group consists of "Nine illuminations with initials cut from a Missal with eight portraits of  Rodrigo Borgia", while in the ninth "The Trinity is represented" leaves no doubt in my mind that this group corresponds to lot 221 in the Ottley sale at Sotheby's, 11 May 1838:

220 Seven similar pieces of Priests at the Altar
221 Nine others ; and a representation of the Trinity