The image above comes from a manuscript Apocalypse, fully digitised on the British Library website, and soon to be published as a hardcopy facsimile. I have recently been asked to contribute to the facsimile commentary a short section about the book's provenance.


The three BL descriptions (here, here, and here) record no provenance earlier than the 20th-century ownership by Alfred Henry Huth, who died in 1910 (he is discussed on a previous post here). Two years before his death he lent the manuscript to the famous exhibition mounted by Sydney Cockerell at the Burlington Fine Arts Club, in 1908 (catalogue no. 163).

In fact it is easy to esablish that it previously belonged to Alfred's father, Henry (discussed here), because it appears in the catalogue of Henry's library, published 30 years earlier in 1880:

The Houghton Library's annotated copy of this catalogue (described in the post here) reveals that Henry Huth acquired it from his main book dealer, Joseph Lilly, for £192 8s in 1862 (I am grateful to Bill Stoneman for sending me this image):
I have yet to consult copies of Lilly catalogues from 1860-62 to see if the manuscript can be identified therein, so for the time being, our provenance trail working backwards from Alfred and Henry Huth ends there.

We can, however, deduce where the manuscript was for several hundred years prior to the 19th century. The clue is on the spine of  its 18th-century binding:

In the 1908 exhibition catalogue, Cockerell suggested that the arms in the second compartment from the bottom were "the arms of a bishop, probably of the see of Gloucester": 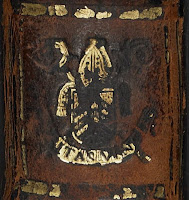 This suggestion was presumably based on the fact that the mitre above the arms and the crossed croziers that extend behind it suggest the arms of a bishop, while the arms themselves, or, three chevrons gules (although hard to discern, the gilt background has dots, indicating gold, "or", and the chevrons have vertical lines, indicating red, "gules", using the standard convention for indicating heraldic colours and metals); these are the arms of the Clare family, Earls of Gloucester: 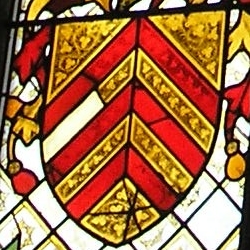 In fact, a much better match can be found for these arms, which takes account of the fragmentary motto beneath the arms on the binding:
Here are two bindings on incunabula (both now at the Bodleian) from the important library of the Premonstratensian abbey of Tongerlo, near Westerlo, about 40km south-east of Antwerp:

... and here is a detail showing the arms in the second compartments from the bottom:

From this it can be seen the the Bodleian and British Library bindings have the same arms, mitre, and croziers, and the motto can now be read in full: "VERITAS VINCIT".

In fact the decorative foliate binding tool on one of the Bodleian bindings is also almost identical to the equivalent tool on the BL binding:

One more piece of internal evidence confirms the evidence of the binding.

The first page of the manuscript is a full-page miniature divided into two tiers: 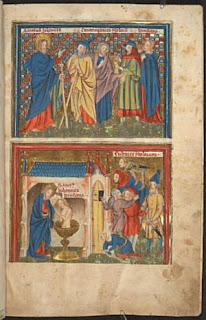 In the upper margin, just above the middle of the upper scene, is an erased inscription, and although it is far from clear, one can (with the eye of faith) discern the capital "B" of "Bibliotheca" at the beginning, followed by one or two ascenders of the letters "bl", and then a second word with "ong" in the middle: Bibliotheca Tongerlo[ensis]:

As there is already another Apocalypse manuscript known as the "Huth Apocalypse", and as the Tongerlo provenance of the present manuscript was previously unknown, I propose baptising this one "The Tongerlo Apocalypse".

In a following post we will see how early, and how late, we can trace the manuscript in catalogues of the library of Tongerlo Abbey. 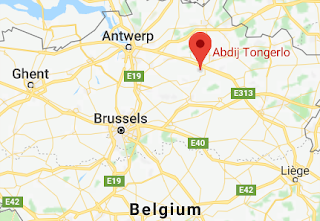