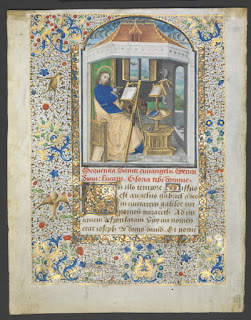 Two years ago I wrote about a prayerbook that had belonged to Henry Yates Thompson. I mentioned that it had an inscription apparently in Portuguese, but I did not reproduce it, except as transcribed by M.R. James:

I also did not mention, because I was unable to read it, that the inscription is adjacent to a thoroughly-effaced ink-stamp. But with some more time and effort I think I have been able to read both, and thus see how they relate to one another.

The inscription is between the end of the Gospel extract of John and the effaced ink-stamp, on the recto of the miniature of St Luke, shown at the top of this post (which is itself on a verso): 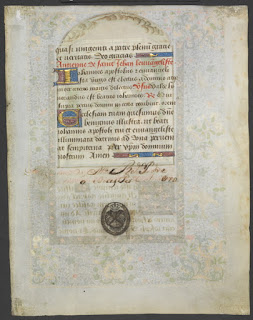 Here is a detail:

and here are a series of variant images (click each to enlarge):

From these one can discern:

This is not quite the same as in M.R. James's catalogue, nor de Ricci's Census, which gives the name as “Paolo Agostinho Biaz Per(eir)a Colmieiro”.

The ink-stamp is more difficult: 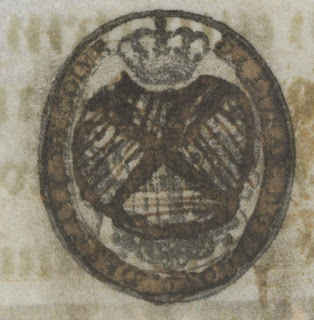 but by rotating the image and by tweaking the digital image to make each side of the legend easier to read, it becomes possible to discern:

This tentative reading can be confirmed by finding other very similar stamps online, such as these:
So, what we seem to have is a book that belonged to the library of the Discalced Augustinians at Coimbra, Portugal, and which was then claimed as his personal property by one of the reverend fathers, who then effaced the evidence of its previous institutional ownership.
Posted by Peter Kidd at 12:55