A few years ago I suggested in a blog post that the script of a Psalter at the Walters Art Museum could be attributed to the scribe Pietro Ursuleo.


A few months ago Giovanni Grandi of the Università degli studi di Parma kindly contacted me to send me a copy of his interesting article 'An Hypothesis Regarding the Scribe of London, British Library Burney 133 and 343', Paideia, 71 (2016), pp. 647-57 and Pls. 1-2, in which he attributes the copying of the two Burney manuscripts to Pietro's brother, Virgilio Ursuleo.

I am pleased to report that he agrees with my suggestion about the Walters Psalter, and includes it in his "Appendix: an inventory of Pietro Ursuleo's Surviving Manuscripts" (p. 654, no. 1).

His article can be downloaded from his Academia.edu page. 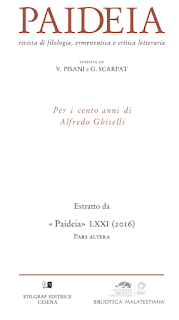