An Unrecognised Book of Hours Made for Philip the Good [II]

In the previous post I suggested that a Book of Hours now at Smith College was written for Philip the Good. If he did indeed own it, it did not remain in the ducal collection for very long. There is an inscription that suggests another owner before the end of the 15th century.

On the back pastedown in a fine formal bâtarde script (also, significantly in the present context, known as lettre bourguignon) is an inscription that reads "C'est a moy Vaillant":
Looking for a person of this name with a connection to the Dukes of Burgundy, I find that Léon le Vaillant (d. 1520) was knighted by Charles the Bold (son of Philip the Good).

The same words appear on the front pastedown:
and below this has been added, "et A Moy Jehan baptiste / de [V]illebichot [...]".

16th- and 17th-century records of Jean-Baptiste and his family are added on the final blank leaves.
The Villebichot ownership of this manuscript has already been discussed in a blog post by Jean-Luc Deuffic, so I will not pursue it here except to give some geographical orientation.

The toponym must presumably indicate Villebichot, a short distance south of Dijon, capital city of the Dukes of Burgundy: 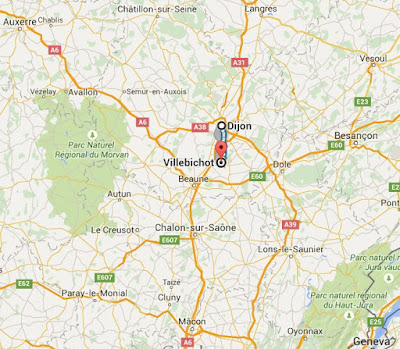 The first page of family records tells us that Jean-Baptiste was born in October 1588 and that his wife was Marye de Flavigny; her family presumably came from Flavigny, to the north-west of Dijon: 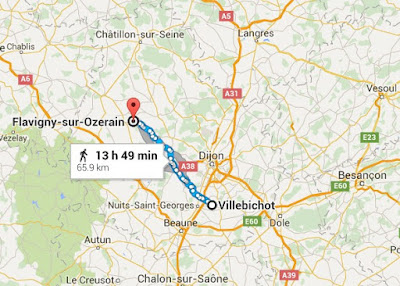 From the 17th to the mid-20th century the provenance of the book is currently unknown. I have not been able to locate the manuscript in the Schoenberg Database, but Martin Antonetti, Curator of Rare Books at Smith, tells me that it was given to the College in 1964 by Helen Dunbar Holmes (Class of 1909). It had been purchased for her as a Christmas present in 1962 from Goodspeed's for $500 by her husband, Hector McIntosh Holmes, of Duxbury, Massachusetts.

Martin also provided me with a scan of the Goodspeed's catalogue description, in which it is attributed to Dijon (but dated a more than a century too late): 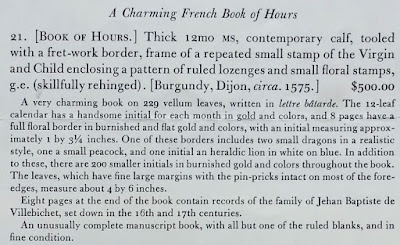 The "heraldic lion in white on blue" mentioned here is probably just ornament, rather than heraldry:
By very good fortune the College also has a photograph of Mrs Holmes looking at the manuscript at Smith College in June 1964, the year she donated it: 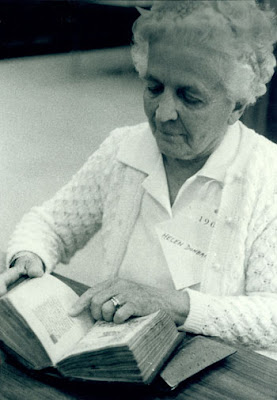 In a forthcoming post on this manuscript I will provide a detailed list of the manuscript's unusual textual contents.
Posted by Peter Kidd at 08:49