In a previous post I mentioned that ten medieval manuscripts belonging to Smith College have been put online via Digital Scriptorium; they include one that I did not see when I visited the College a year ago.

Skimming through the Digital Scriptorium images this summer my interest was piqued by MS 288, a Book of Hours whose first text (after the calendar) has a rubric which mentions the Duke of Burgundy and provides the scribe's name, Dominic of Burgundy: 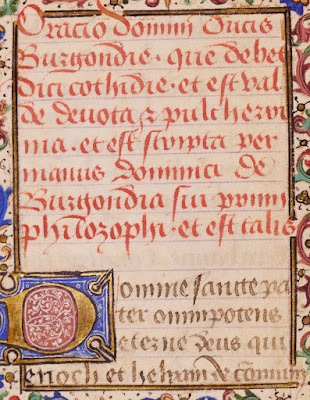 Searches for the prayer's incipit, "Domine sancte pater omnipotens eterne deus qui Enoch et Helyam ...", have been fruitless, suggesting that this prayer is at least rare, and potentially a unique composition for this manuscript.

The verso of the same leaf, with the continuation of the prayer, contains a big surprise.
From near the end of the sixth line, the text reads:

These identifications give a broad date for manuscript: it must post-date Charles's birth in 1433, and pre-date Philip's death in 1467, when Charles assumed his father's title as Duke of Burgundy. San Bernardino of Siena, who was canonized in 1450, occurs in the Calendar (20 May), narrowing the possible date-range to 1450-1467; this is in accord with the style of illumination. The style of the creatures that inhabit the border at the beginning of the Hours of the Virgin, especially the second one below, remind me of creatures that inhabit borders illuminated by Lieven van Lathem, who worked for the Dukes of Burgundy in the second half of the 15th century: 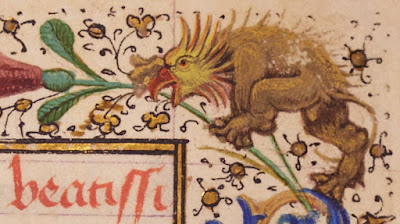 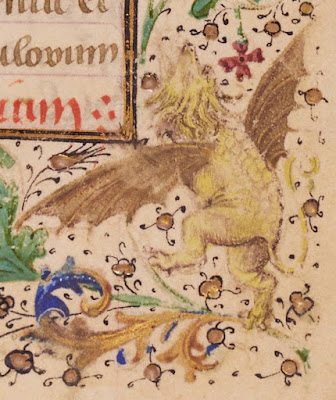 Based on the text of the prayer quoted above, it is not clear for which of the three individuals the prayer was written (it could have been written for Charles, for example, who would have been expected to pray for his parents). A sceptic might argue that it was written for a devoted courtier, who would pray for the ducal family instead of himself. But I think that the continuation of the prayer makes the intended supplicant more certain:
From the second line of this page it reads:

This leaves little doubt in my mind that the prayer was composed to be read by Philip himself, and almost all remaining doubt is removed by the text of the prayer Obsecro te, which includes, in addition to the usual anonymous initial "N" (for nomen), the extra initial "P":
This occurs again twice in the prayer on the Seven Last Words of Christ on the Cross:
Towards the end of the volume is another prayer referring to the Duke, his wife, and their son:

This is simply a version of a prayer that occurs elsewhere as a prayer for an archbishop and king:
It has to be admitted, however, that there is no clear evidence that Philip actually owned the book. The main reason for doubt is that it contains no miniatures, and no obvious evidence that any miniatures have been removed (although I have not seen the book in person, and thus have not been able to examine the collation). The individual hours in the Hours of the Virgin do not all start on new pages, so it is clear that no miniatures were ever intended at these points:
This seems strange for a man who owned lavishly decorated manuscripts, and was one of the great art patrons of his day. The most likely explanation is that Philip did not commission it himself: it seems at least possible that Dominic of Burgundy, the scribe (and author?) of the opening prayer, produced the book as a gift for Philip.

In the next post I will outline this manuscript's later history.

-------------------------------
[1] The term "philosophus" puzzles me. Latham's Revised Medieval Latin Word-List, gives an instance of its use to mean "teacher" in c.900. Dominique Vanwijnsberghe, who kindly read a draft of this blog-post and made several very useful suggestions, pointed out it is also listed in Du Cange as referring to a school-masters who were also ecclesiastics. Dominique also suggested that the word might perhaps be used to refer to a physician (an idea I find plausible, as physicians were also sometimes astrologers, and astrologers were sometimes referred to as philosophers), and he thus suggested this identification:
A counter-argument is that we might expect Dominique to call himself "of Geneva" or "of Bruges", not "of Burgundy".