A Bible in Philadelphia, With a Spanish(?) Provenance [II]

In the post two weeks ago, I traced the so-called Patou Bible (Philadelphia, Free Library, MS Lewis E 242) back through an 1877 auction catalogue to the Cistercian abbey at Loos, which owned it by the early 18th century, and discussed a 15th-century owner, Jean Patou. But I deliberately omitted the book's earlier provenance, which I'll begin to address today.

What follows is sometimes complex, and I have puzzled about the best way to present it. Instead of pre-ordering it into a coherent chronology, therefore, I have decided to present it first in the order in which a reader -- or you, the researcher -- would encounter it if you had the manuscript in front of you, and turned its pages.

The first thing you would see is the binding:
This has been described as "distinctively Spanish"[1]. I do not know enough about Spanish bindings to agree or disagree with this strongly, but I find it believable because it does not look to me to be particularly English, Netherlandish, French, or German. I might have guessed it to be Italian, but as we will see, there are other clues strongly supporting an Iberian origin.

The first flyleaf has a table of contents, listing the biblical books (headed "Rubrice biblie" by a slightly later hand), with folio numbers in Roman numerals:
I suppose the script is 14th-century, and while am not confident about the origin of the scribe, the script looks "southern" but not particularly Spanish, and the spelling of Thessalonians as "Tessalicenses" is perhaps Portuguese:

and "Appochalissis" for the Apocalypse is a spelling I have found in Italian contexts:

The next two flyleaves have two of the inscriptions with the name of Johannes Patou, that we saw last time [images], and then the normal biblical books and prologues follow.

In addition to the modern pencil foliation at the top of each recto, the leaves have two sets of ink foliation, representing two medieval owners: in the lower right corner the earlier one is in Roman numerals, perhaps added by the person who wrote the table of contents, and higher up, next to the lower right corner of the text, is a later foliation in Arabic numerals, perhaps of the 14th and 15th centuries, respectively. Here, for example, is fol. ".39." / ".xxxix.": 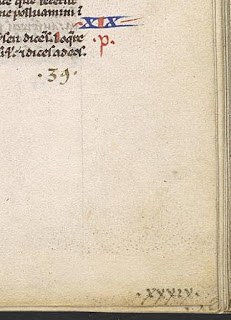 Last time we saw a few of the initials attributed to the Parisian "Johannes Grusch Atelier", but this is not the only major decoration. Added (very unusually) in a few of the margins are miniatures depicting Christological scenes: 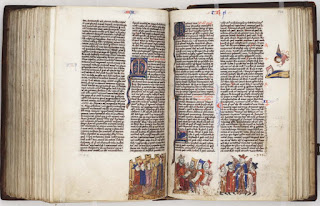 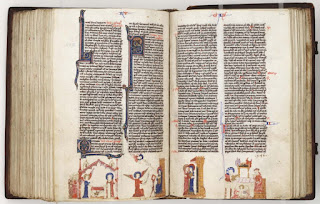 Clearly their palettes are different, and a closer look confirms that they are in two quite different styles [as usual, click images to enlarge them]:

They have been described as "Cantigas-style illustrations incongruously added to the manuscript after it made its way to Spain sometime during the late fourteenth century"[1].

When we get to the end of the biblical text, we find something unusual: immediately following the end of Apocalypse is a whole series of texts, added on leaves originally left blank, starting with the standard biblical canticles that usually come between the end of the psalms and the beginning of the litany in a Psalter:

One of these canticles, although itself a standard text, provides a provenance clue. In his Rule, St Benedict stipulated that, in the Divine Office, some of the longer psalms should be divided and treated as two. Likewise, the long Canticle of Moses (Deuteronomy 32:1-43), which begins "Audite celi que loquor", is divided in Benedictine Psalters in the middle, at verse 22, which begins "Ignis succensus est"; in the present Bible we see that this division is used, suggesting that the canticles were added by a monastic owner:

Following the Canticles and Creeds is a long Litany of Saints. One of the many ways in which it is unusual is its heading, "Letanie humiles et devote":

We saw last time that the Bible was at Loos Abbey by the early 18th century, and thanks to this rare heading, and Google Books, we can trace it back another century, and identify it as a Bible seen at Loos before 1640 by Anthonius Sanderus: 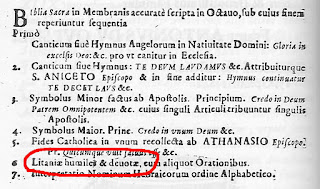 One of the strange features of the Litany is that the list of martyrs does not begin with Stephen, as in virtually every other litany (because he was the first Christian martyr), but with Cain's brother Abel, because he was, in a sense, the first man to die for god:

These saints help us to date the litany:
So these added texts must have been written after 1323. It may also be relevant that Ivo of Kermartin, of the Third Order of Saint Francis, who was canonised in 1347, is absent, so the litany may have been written before this date.

Following the Litany and further prayers, the original 13th-century manuscript resumes with the normal Interpretations of Hebrew Names [image].

The final two flyleaves, originally blank, are now occupied by the Hours of the Virgin of the Use of Rome [image], following which is a space that has partly been filled with later inscriptions, including some of the Jean Patou ones we saw last time: 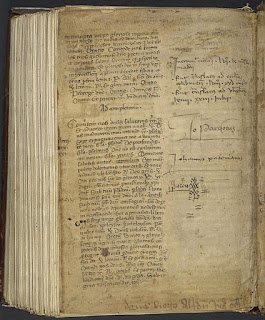 One of these inscriptions is a clue to an Iberian owner, as mentioned above. At the bottom edge of the leaf is an inscriptions that includes the name Diego Alfonso:
The position is not typical of an ownership inscription, so it may be something else. The name appears to be followed by a roman numeral "Viij" and an abbreviated word beginning "och": this looks like it could be an abbreviation of a word like "ocho", meaning 'eight' in Spanish, and so it may be relevant that the Spanish peso was worth eight reales (which is why they came to be known as a "pieces of eight") [Wikipedia]. Thus the inscription appears to be record of a sale/purchase by/to Diego Alfonso.

A further suggestion of Spanish provenance is on the final pastedown, which is covered with inscriptions (including, at the bottom, a cure for worms!): 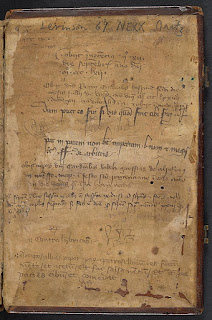 which could have been written by anyone, but below this is added the obit of "Petrus Cardinalis Hispanie" who died on 2 September 1374:

From the date of death we can identify this as Cardinal Pedro Gómez Barroso [Wikipedia], to whom we will return later. Pedro's obit may perhaps have been written by his (unnamed) nephew, whose own obit is added lower down on the same pastedown:

I find the name hard to read, but if it is something like "Garssas de Aljafinus", I suspect that "Garssias" is a variant of "Garcia".

So, having looked at all these added inscriptions and images, we now have evidence for several stages in the book's medieval history (not to mention more information about its post-medieval time at Loos). To summarise the evidence for provenance thus far:

Next week I will suggest who owned the book in the 14th century, and was thus perhaps responsible for various added texts and images.


[1] Debra Taylor Cashion, "Cataloging Medieval Manuscripts, from Beasts to Bytes", Digital Philology: A Journal of Medieval Cultures, 5 no. 2 (2016), pp. 135-59. (online at Academic.edu) She writes: "The distinctively Spanish binding of Lewis E 242, a thirteenth-century Paris Bible, helps explain the Cantigas-style illustrations incongruously added to the manuscript after it made its way to Spain sometime during the late fourteenth century."