A Bible in Philadelphia [III]: The Bible of Cardinal Pedro Gómez de Barroso?

Something that I did not mention in the previous two blog posts, and is also not mentioned in any of the online descriptions of the Bible, is what appears to be a sort of itinerary, in a 14th-century hand:
At first I though that the three dates might be a record of someone's journey southwards in a single year, but the fact that the Roman numbers in the inscriptions progress from 56 to 58 to 64, while the dates go from May to August, then back to July, suggests that the dates are not from a single year, and the Roman numbers represent (the last digits of) different years. If so, the three dates and two legible place-names are:
I wondered if this might represent the career of a 14th-century cleric, as he was transferred from one church to the next?

It turns out that the second and third dates correspond precisely to the career of Pedro Gómez Álvarez de Albornoz Barroso (c.1322-1374) [Wikipedia; Cardinals]:
He was later appointed Archbishop of Seville in 1369, and became a Cardinal in 1371.

[Older biographical sources are confused and confusing, because there were two men of the same name with similar life-spans and careers; the most recent and most detailed biography disentangles them, here.]

I am not sure how the first of the three notes, with the date 1356, starts:

I first transcribed it as "Intravit Civam(??)". In 1348 Pedro became Bishop of Siguenza, in Spain. In 1355 he was imprisoned, and after his release at the end of the year, went to Avignon (his uncle, Gil de Albornoz, was a Cardinal). I therefore wonder if the May 1356 entry should read "Intravit curiam" -- i.e. he entered the papal curia at Avignon?

It seems to me that no one other than Pedro himself would have a reason to keep such precisely-dated records of his life, and thus I strongly suspect that he owned the Bible and wrote these inscriptions himself. It will be remembered (previous post) that his obit is entered on the manuscript's back pastedown, dated 2 September 1374, so we can be sure that the manuscript was in the hands of someone close to him, after his death:
It seems to me that this all makes it more likely that (i) the bookbinder, (ii) the artists of the added marginal drawings, and (iii) Diego Alfonso, all described in the previous posts, were not Spanish, as has always been stated, but Portuguese.

If Pedro owned the manuscript in the final decades of his life, it would explain how it found its way from Portugal back to France: he died at Avignon. It later moved further north where, as we have seen, it was owned by Jean Patou in Troyes and Cambrai. There are various erasures on the pastedowns and flyleaves; maybe Patou erased an ownership inscription of Cardinal Pedro Gómez de Barroso?

The Bible was apparently in a French-speaking area in 1524, when an inscription was added, sideways, in a margin on one of the final leaves: 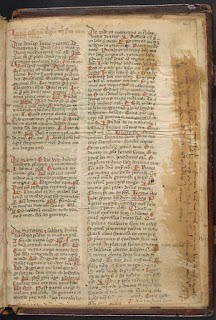 Parts have been erased, but it is possible to read a few words and see that it is in French:
and the date:
As we have seen, at some point it ended up at Loos Abbey, near Lille.

As Jean Patou's ownership of the manuscript is certain, we should continue to call it "the Bible of Jean Patou", but I do not think it would be incorrect to also think of it as "the Bible of Cardinal Pedro Gómez de Barroso".