Since learning of the excellent catalogue of the Italian illuminated manuscript leaves and cuttings at the Berlin Kupferstichkabinett, I have been in contact with its author, Beatrice Alai, about various cuttings, collectors, and collections. It is thanks to her that I very recently considered a  puzzle which turns out to have an unexpected and satisfying conclusion.

After the First World War, Paul Wescher (1896-1974) [brief biography] studied Art History and wrote a dissertation on manuscript illumination. In 1924 he got a job at the Staatliche Museen zu Berlin, and in 1927 in its Kupferstichkabinett. In 1931 he published a catalogue of their medieval manuscripts, leaves, and cuttings: Beschreibendes Verzeichnis der Miniaturen: Handschriften und Einzelblätter des Kupferstichkabinetts der Staatlichen Museen, Berlin (Leipzig, 1931). [not available online, as far as I know] 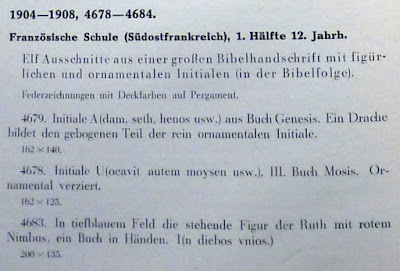 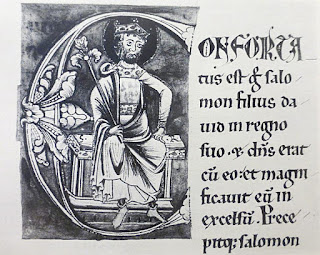 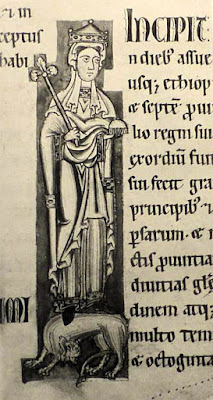 Another cutting is at the Getty Museum (shown at the top of this post). A comparison of a detail of the Getty cutting, with a detail of one of the Berlin ones, both in colour, should leave you in no doubt that they are from the same manuscript: 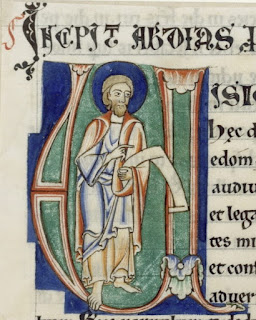 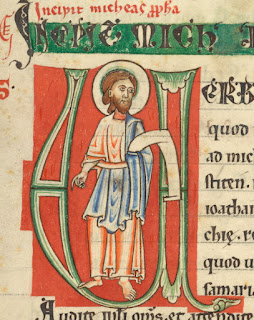 Beatrice has an article in an advanced state of preparation, in which she will discuss the cuttings in detail, including how the Berlin group entered that collection, but she contacted me recently to ask about the provenance of the "stray" at the Getty, in case this sheds some light on the history of the group as a whole.

The lower right corner of the Getty cutting has a collector's ink-stamp, in the form of an "M", or upside-down "W", within a circle: 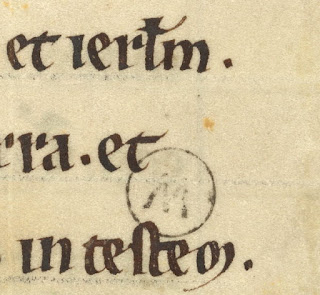 On the back of the cutting, which is laid down on paper, is a pencil inscription: 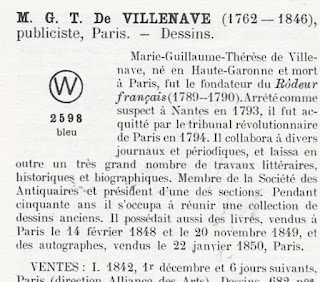 Of all the collectors' marks in the published edition of Marques and its Supplément, this is indeed the closest match for the Getty ink-stamp.

Part of what puzzled Beatrice is that the Lugt number for the Villenave collection is 2598, but the Lugt number in the pencil inscription, 2398, refers instead to the ink-stamp used for duplicates at the Kupferstichkabinett at the Staatlichen Museen zu Berlin, the very collection that owns the other cuttings!: 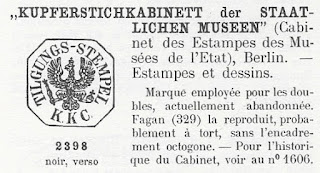 Did the writer of the pencil inscription perhaps know that this cutting had previously been part of the Berlin collection, and thus confuse the Lugt numbers?

The Getty bought their cutting at Sotheby's, 2 December 1986, lot 4, but it was sold anonymously, and the only provenance provided is: "collector's stamp in lower right-hand corner (apparently Villeneuve, 1767-1846, Lugt 2398)", so this does not help.

The current Getty website corrects the date, spelling of Villenave, and Lugt number, but provides no further information (and does not include the Sotheby's sale under "Provenance" -- you have to look under "Bibliography" to find out about that, where, confusingly, two other irrelevant auction catalogues are also cited):

We seem to have been led down some some false trails, and reached a dead-end.

Something that bothered me in all of this, was why someone called "Villenave" would use a "W" (or "M") for their ink-stamp.

A look at the revised and updated online version of Lugt's Marques suggests that this ink stamp does not refer to the Villenave collection, and leads to an alternate identification.

For no. 2598 (formerly identified as Villenave, now as "non identifiée") the Lugt database includes a photo of the stamp:

But placed side-by-side with the stamp on the Getty cutting, we can see that they are not identical:
The Getty letter "W" is composed of thicker lines, and is surrounded by more empty space within the circle. It is, in fact, a much closer match to Lugt no. 5551 (which was not in the printed editions of of Marques and its Supplément):

And whose ink-stamp was Lugt no. 5551? The Lugt database suggests that it was Paul Wescher's!

I suspect that Wescher bought the Getty cutting because he recognised it as coming from the same manuscript as the Berlin ones. Then, at some later point before emigrating to the USA in 1948, he sold it, and it was subsequently owned by the German-speaking (perhaps Swiss) person responsible for the inscription on the back.

There is a amusing symmetry in the fact that Paul Wescher, after he moved to the US, was employed in the 1950s by none other than J. Paul Getty (1892-1976) [Wikipedia], as the very first curator of what would eventually become the permanent home of his cutting, the J. Paul Getty Museum!
Posted by Peter Kidd at 09:03