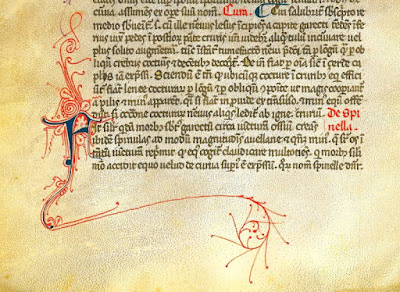 I recently found a very interesting blogpost written in 2014 by David Whitesell, of the University of Virginia, describing the acquisition of six leaves of a copy of Giordano Ruffo's treatise about horse-health. It includes this:


"Here is what we know about their provenance. In December 2011, 21 leaves from an imperfect copy of Ruffo’s manuscript were offered at a Sotheby’s auction in London. The leaves went unsold but were bought privately following the auction. This past fall [i.e. in 2013] we learned of the manuscript when an American bookseller’s catalog, in which eight of the leaves were offered, arrived in the mail. We promptly placed an order for all eight leaves, but two had already been sold. The bookseller subsequently reported that he had originally acquired 11 of the 21 leaves, three of which were sold to two different American research libraries, and two to private collectors in the U.S. and Europe, before U.Va. bought the remaining six. Eleven leaves, five new owners on two continents, with ten leaves still unaccounted for."

Most of the "unaccounted for" leaves were identified in the comments below the post, so we know the whereabouts of almost all of them, as follows:

I have had an interest in this manuscript since 2012, when the owner of the leaf in the USA commissioned me to do a little work on his leaf. (I struggled, as I did not know the technical words for parts of horses -- such as "bone spavins" [Wikipedia] -- let alone their Latin equivalents!)

Thanks to David Whitesell and others, I now have photos of almost all the leaves (but not both sides of all of them), which allows a fairly full reconstruction of the contents and appearance of the manuscript before it was broken up. Details are given on this Membra disiecta page.

The only account of the volume before its dismemberment is the 2011 Sotheby's description, so let us try to parse it:

So far, this is straightforward, although it omits to mention that the volume ends with extracts from Seneca.


a fragment of 21 leaves on vellum (3 quires, the second beginning with a singleton but with no losses to text, wanting leaves from front and end, and a few between the first and second quire and a single leaf between the second and third),

This is difficult to interpret without the manuscript in hand. It seems to say that in addition to leaves missing at the beginning and end, there are two leaves missing between the 1st and 2nd quires, and a single leaf missing between the 2nd and 3rd, i.e.:
Quire 2 "beginning with a singleton but with no losses to text" is difficult to make sense of: as there is also a single leaf missing at the end of the quire, this suggests that the outer bifolium was missing, and a comparison of the available photos with a printed edition shows that text is missing after the 3rd surviving leaf, as well as at the beginning and end of this quire. (A close look at the gaps in the text, and the structure of three intact bifolia now at St Louis, suggests a very different structure; details on Membra disiecta page).

The mention of two bookhands alerts us to the possibility that the volume was perhaps made in two stages, but does not provide all the evidence that this was indeed the case: in fact, the Ruffo part is decorated with initials alternately blue with red flourishing, or red with mauve flourishing (not blue), while the Vegetius/Seneca section is written with 41 lines per page (not 31). The style of the penwork flourishing is also different in each section. Clearly the two main texts were ruled, written, and decorated in two distinct stages [click images to enlarge]:
Here is a close-up comparison of flourishing colours and styles: 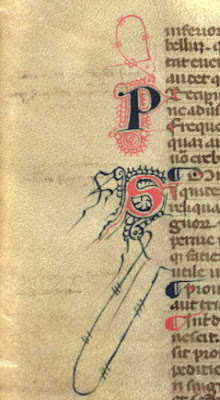 
inscription inside front board recording gift of volume from one physician (Vincenzo Malacarne) to another (Giovanni Alessandro Brambilla of Pavia) in 1781/7,

It is not clear from this if the binding was of 19th-century paper over older pasteboards, or whether they were coeval. But if they were coeval, they cannot have been 19th-century, because the inside of the front board had the inscription dated 1781/7. Perhaps the dealer who broke the volume still has these boards and this inscription, or perhaps they have been thrown away as unsaleable.


"All parties have benefited from these transactions: the booksellers made money, and the five new owners have acquired useful materials for their collections. But what of the manuscript itself? Any attempt to study the text and its relation to other exemplars has been seriously, perhaps fatally, compromised"

The following blogpost will consider some of the issues raised by this bittersweet conclusion.