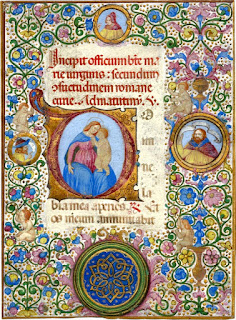 In a previous post I identified one of the leaves that was exhibited at the 1926-27 BFAC exhibition.

A private collector who owns another leaf from this volume (shown above) has contacted me and told me that his leaf was sold at Sotheby's, 2 Dec 2003, lot 26. I had annotated my copy of this catalogue with references to several other sales, which enables me to provide a much more detailed provenance for the parent volume and some of the individual leaves:

A member of the Florentine Strozzi family? According to a description of the David Harping leaf (Sotheby's, 18 June 1991, lot 44, see below), "The arms seem to have been those of Strozzi, perhaps the great Filippo Strozzi the Elder (1426-91)". The identification of the heraldry does seem plausible: 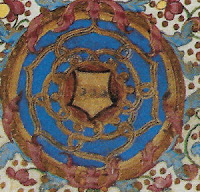 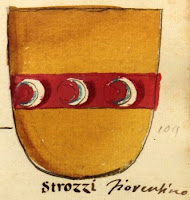 In the same catalogue it is proposed that the way in which the miniatures have been inset into a larger sheet of gilt-edged vellum suggests it they were owned by John Boykett Jarman (who is studied in a well known article by Janet Backhouse) and would thus be lot 5 in his sale, Sotheby's, 13 June 1864, lot 5, bought by Joseph Lilly:

This identification is possible, but only seven (not ten) leaves are recorded later, and the quoted rubric ends with the words "Romanæ Ecclesiæ", whereas in the manuscript (see below) it ends "romane curie".

The 1991 Sotheby's description records "The inlaying of the leaf on a larger sheet of gilt edged vellum", something that is not mentioned in the description of lot 5 in the 1864 Jarman catalogue, shown above. Lot 51 in the same sale, however, is a much better match, both because it records the miniatures being "mounted on vellum", and because it records 7, not 10, miniatures:

Presumably at least five additional leaves were owned by Stuart Gerald Davis (1866-1951) when he lent two, the Crucifixion and Last Judgement, to the BFAC exhibition in 1926-27.

The 1991 Sotheby's catalogue records a pencilled inscription on the back as Stanley P. Davis, presumably the next owner and a relative of Stuart Gerald Davis.

Seven leaves with miniatures were sold as the property of The Right Reverend N.W. Newnham Davis (1903-66) (on whom see here, presumably a relative of the previous owners, Stanley P. and Stuart Gerald Davis), at Sotheby's, 11 July 1966, lots 199-205. Most have re-appeared on the market since then:

It seems clear that the leaves would have been in facing pairs, with a full-page miniature on a verso, and the start of a text with an historiated initial on the facing recto:
If the series originally consisted of ten leaves, as described in the 1864 Jarman auction catalogue, then the other three would presumably be the start of the Hours of the Cross (to face the Crucifixion), and two leaves at the beginning of the Hours of the Spirit, doubtless including an image of Pentecost.

I am going to have to re-think and re-write parts of this post. An attentive reader has pointed out that I have conflated two different leaves: in the BFAC exhibition, the 1966 auction catalogue, and the 1966 Maggs catalogue, the Crucifixion was in a historiated initial, whereas the Crucifixion reproduced above, from the 1970 catalogue, is a full-page miniature.