In the first post on the The Burlington Fine Arts Club Exhibition, Winter 1926-27, here, I made no comment about the first item described in this image: 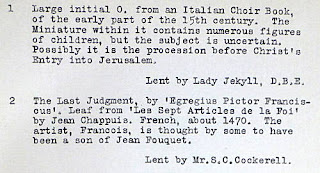 I could picture the initial in my mind's eye, having seen it in a Sotheby's catalogue, but could not remember which one. Today I found it: it was sold on 9 July 1973, lot 14, and was bought by Ian Woodner for £13,000; it was not part of the Woodner bequest to the National Gallery of Art, Washington DC, in 1991, but was given in 2013.

Combining information from the 1973 description; the description of a sister-cutting, sold at Sotheby's, 17 June 1997, lot 30; and the NGA website, we can reconstruct the provenance as follows:
It appears that it was exhibited at yet another BFAC exhibition, in 1903, where it was no.42, apparently one of only two illuminated manuscripts (but it would have been almost impossible to deduce this from the brief and vague description, if it were not for a reference in the 1973 auction catalogue): 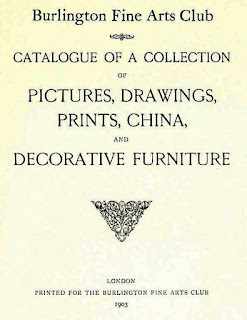