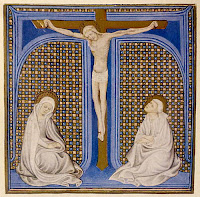 Downstairs in the Writing Room seven further items hung on a wall, all lent by Capt. Edward G. Spencer-Churchill, who, as we saw in the first post of this series, was one of the members of the Exhibition Committee. 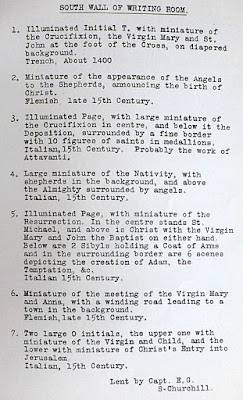 I'll save the rest of this group for another post, but no.1 was shown at the very top of Part I of this three-part post and is repeated above. In the 1928 sale it was described as "French, c. 1400" and attributed to the "Burgundian School": 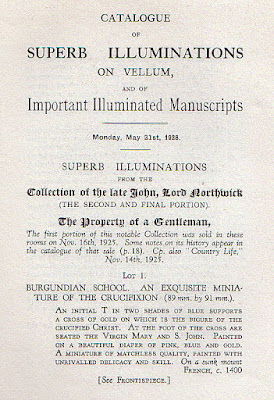 It is now at The Met (28.140), attributed to Avignon, c.1400, presumably at least partly due to the Italianate script and decoration on the reverse:

Postscript:
Francesca Manzari contacted me after seeing the Crucifixion image at the top of the earlier post, and tells me that she has identified it as coming from the multi-volume Missal of Benedict XIII, and has attributed the decorated letters on the reverse to Sancho Gonter (one of the illuminators closest to the pope); François Avril has attributed the Crucifixion itself to the Maitre d'Orose, who worked in Avignon for Benedict.

Francesca also tells me that Sancho Gonter (or Gonthier) left his name in a Pontifical he completed for Benedict XIII, and this is how we know he must have been Spanish (Sancho), but he must have been trained in Bologna, because his style is absolutely Bolognese. No one would have suspected otherwise if he hadn't listed the initials he wanted to be paid for. He is very well documented -- see the many references in her La miniatura ad Avignone al tempo dei papi (1310-1410) (Modena, 2006) -- as working in Avignon for Benedict (but he starts working in Juan Fernandez de Heredia's Avignon editorial project, full of Spaniards, so maybe that's how he came to Avignon) and then he leaves Avignon after the pope's departure, following him in all his peregrinations through Southern France, Catalonia, Northern Italy (Savona) and then to Peniscola.
Posted by Peter Kidd at 08:20