Browsing the recently improved website of the Free Library, Philadelphia, I found the image above. The style is a bit weird, for reasons that will become apparent, but regular readers will recognise the lattice window and wall-covering behind the half-length pope from posts here, here, and here, and especially here.

The cuttings of which I am aware all have a red wall-covering, but the green and gold wall-covering is is found in the intact companion volume at the Morgan Library. It therefore turns out that my suspicions about the style were confirmed: the above illumination is not a medieval cutting, but a modern copy of an initial in the New York volume:
Here it is, in context:
Presumably by the some copyist (forger?) as Lewis E M 33:22 above, is this image of Francesco Sforza, also at the Free Library, and with a consecutive call-number, so perhaps acquired at the same time:
The portrait is recognisable as coming from one of the illuminated copies of the printed Sforziada (one of which was discussed here), of which three complete copies are known, each of which is illuminated with different borders:
Each has a similar, but slightly different portrait: most obviously, the Paris copy has a red background and the Warsaw one has all the lettering to the right of Francesco's head, so we can see that the Philadelphia image was copied from the volume in London: 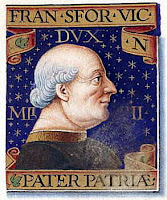