A Cutting from a Chartres Cathedral Antiphonary 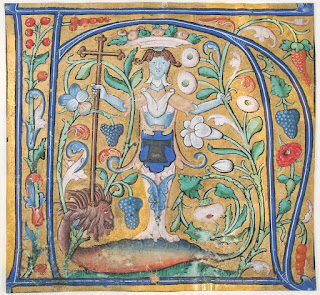 Some time ago I saw a curious cutting at Maggs Bros. It was hard to know if the composition was pure fantasy, or whether the (?)processional cross and the "heraldry" might be significant. 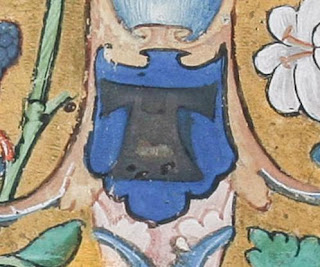 The argent charge on the shield-shaped azure ground looks like a sort of short-sleeved tunic, or tabard. It seemed too specific and unusual to be just an invented design, but spending a bit of time hunting through heraldic sources got me nowhere.

I made better progress with the reverse, and was able to identify the text as part of the feast of St Gertrude of Nivelles: 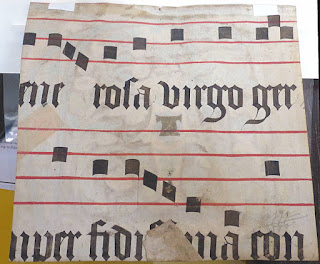 The Cantus database only has two examples, both from Tongeren, in Belgium, so despite the mainly French style, I thought that the cutting might come from there.

A few days ago I found the answer. In the catalogue of the exhibition of manuscripts from collections in the Pays de la Loire and Centre, held at Angers from 2013 to 2014, is an entry reproducing this cutting: 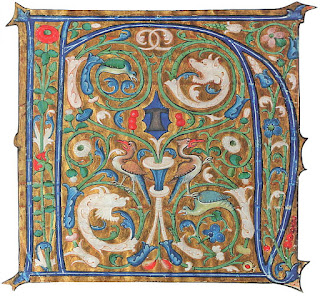 It has the same argent motif on the same azure ground: 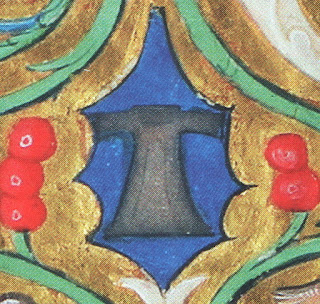 This cutting is now at Dreux, about 40km north of Chartres:

There is also a brief online description here, and as both descriptions by Pierre-Gilles Girault explain, the antiphonary from which these cuttings come can be attributed to Notre Dame de Chartres (the cathedral) on account of this motif, which is the "sainte chemise" of the Virgin Mary, its major relic. (Although the relic was in fact a 5-meter-long veil, it was translated into French as "chemise" in the Miracles de nostre dame, which influenced the way in which later artists depicted it). Its iconography was used on pilgrim-badges from the 13th century, and proliferated, replacing the Annunciation on the cathedral chapter's seal, and appearing in the sculpted tympanum of the cloister door, and in the choir tower begun in 1519. 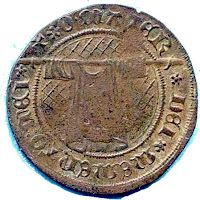 Edit 24 Sept. 2016
The cutting is currently available on the Maggs website here (though it will presumably be removed once it is sold).
Posted by Peter Kidd at 07:30