A Painter from Avignon in 1436

Last week Christie's had an auction the medieval manuscripts of Maurice Burrus (1882-1959), several of which have interesting provenances.

Lot 2, for example, was an attractive 12th-century Gospel Book from Montmajour, just outside Arles, south of Avignon: 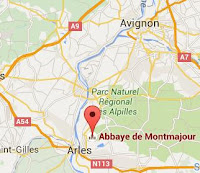 At the end of the main text are 15 added paragraphs, written at various dates from 1436 to 1450 by Roger, the Sacrist ‘of this holy monastery of St Peter, Montmajour’.
Here is a detail of a typical example of one of them, recording how Jacques Martin, clerk of St Flour (Auvergne), on seeing an old glass window broken, was moved to pay to have it replaced, by the hand of Master Guillaume, a painter from Avignon:
The manuscript appears to give the last name of the painter as "doben' ", but, using Graesse, Orbis Latinus, I have not been able to satisfactorily identify this as a toponym.

But it seems to be more than coincidence that the best-documented stained-glass painter active in and around Avignon at this period was called Guillaume Dombet: