"The School of Giotto" 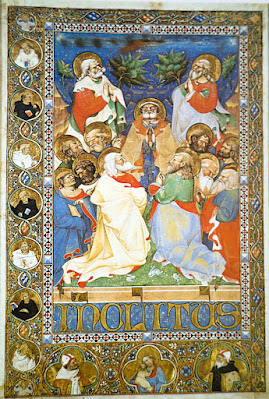 One of the challenges of provenance research is interpreting catalogue descriptions when there is no accompanying image to verify the identity of a manuscript. The task would be simpler if catalogue descriptions were always accurate, but they sometimes contain typographical errors; sometimes written statements are open to different interpretations and are therefore ambiguous; sometimes cataloguers get things wrong in good faith; and they often get things wrong by being overly optimistic in their attributions.

This week I was able to see a second annotated copy of the Christie's catalogue of the Thomas Miller Whitehead sale, 10 May 1898: I wanted to see it because it contains, as lot 77, the very large miniature by the Master of the Murano Gradual that I will now call Matthias Chosen to Replace Judas (shown at the top of this post, and on which see this blogpost):

"AN ILLUMINATED MINIATURE DRAWING, on vellum, of The Descent of the Holy Ghost: a composition of thirteen figures kneeling, upon whom the Holy Ghost in the form of a small dove descends ; this is enclosed in a small diapered border ; beneath, in letters of gold, Inol Itus ; in the bottom and left-hand border are twelve medallions, one at the bottom with Virgin and Child, nine with bishops and martyrs, and two with angels, on solid gold grounds—19 in. by 12½ in.
From the Ottley Collection"

Despite a misreading by the cataloguer, or typo by the printer, there can be no doubt that "Inol Itus" should be "INCLITUS":

Both annotated catalogues that I have seen are in agreement, and record that this lot was bought for £46 by Col[naghi] & Co., the London art dealers [Wikipedia]:

It was later owned successively, as is well known, by Edouard Kann (on whose collection see this post); the Wildenstein company; Georges Wildenstein, and his son Daniel who gave it to the Musée Marmottan. But what of its earlier provenance, before this 1898 sale?

The 1898 catalogue states that it comes from the Ottley collection, and there has never been much doubt that it was lot 192 in the 1838 Ottley sale: not only is the description a good match ("The Descent of the Holy Spirit, a large sheet, splendidly gilt and coloured, in a border, containing in ten circular compartments, busts of Bishops and Monks, by the same hand"), but the final phrase, "by the same hand", refers to the previous lot (the historiated initial discussed in this post), which is stated to be "from Murano".

At the Ottley sale, the miniature was bought by "S[amuel] L[eigh] S[otheby]" for £3 or by "Sotheby" for £3 6s (annotated copies of the catalogue differ in how they record the name and the price paid).

I suspect that Smauel Sotheby sold it to (or was bidding on behalf of) James Dennistoun (1803-1855) [Wikipedia] (well-known for his album of illuminated cuttings, which was eventually dispersed at Sotheby's, 3 July 1984). In Dennistoun's own posthumous sale at Christie’s, 14 June 1855, lot 46 was described as:

“School of Giotto  .  46   The Pentecost. A beautiful miniature, on vellum, with rich border.”

The subject here, "The Pentecost", is understandable because it had been described as "The Descent of the Holy Spirit" at the Ottley sale, and indeed the true identity of the scene remained uncertain until (I would argue) a few months ago.

The attribution to the “School of Giotto" is problematic, for two reasons: first, to modern eyes, the syle of illumination has very little in common with that of Giotto. And second, there are other large miniatures of Pentecost attributed to the School of Giotto, and so the Dennistoun leaf might be one of them. For example, lot 180 in the Ottley sale was "The Descent of the Holy Spirit, in a similar border by the same hand", where "by the same hand" refers to the preceding lot, which is described as "supposed to be painted by Giotto".

This is a case where context matters. As has been mentioned before (e.g. in this post) lots 177-179 in the Ottley sale can all be identified as leaves from the Laudario de Sant’Agnese illuminated by Pacino and The Master of the Dominican Effigies. The post-Ottley provenance of lot 180 is unknown until the 1960s, when H.P. Kraus had it; it is now MS 80 at the Getty Museum:

I suspect that it may have been bought at, or shortly after, the Ottley sale by William Horatio Crawford (1815-1888) of Lakelands, and it may have been part of lot 2114 in his posthumous sale in 1891, which included a “Descent of the Holy Ghost” -- but the evidence is weak and circumsantial.

Having distinguished one image of Pentecost / the Descent of the Holy Ghost from another -- both of which were in the Ottley sale and both of which have been attributed to Giotto or his school -- we can say a bit more about the provenance of the one with which we started, now at the Musée Marmottan, and in reality by the Master of the Murano Gradual.

At the 1855 Denniston sale the leaf was bought by the dealer [Walter Benjamin] Tiffin [1795-1877]. It was probably acquired from from him (as other illuminations certainly were) by John Fuller Russell (1813–1884) [Wikipedia]. Fuller Russell exhibited this leaf at least twice. In the 1874 Burlington Fine Arts Club exhibition catalogue (p. 35 no. 4), it was described as:

It is intersting to see that the attribution ("School of Giotto") is unquestioned, but the subject of the scene was considered uncertain.

He lent it again, five years later, to the Royal Academy exhibition of 1879, where it is no. 176 in the catalogue. This time we get a very detailed description, including the crucial mention of the word "Inclitus":

“DESCENT OF THE HOLY SPIRIT.

The Apostles, kneeling; the Holy Dove, flames, and stars are represented in the distance. At the foot of this picture the word Inclitus, with the musical notation above it, is emblazoned on a dark blue field, elaborately ornamented with a white pattern. surrounding this and the picture, is a mosaic border, round which again is another border representing gems, leaves, and flowers on a burnished gold ground, and containing ten circular compartments, in which are half figures of the Virgin with the Child, two bishops, and eight monks. Vellum, 21½ by 14¾ in.”

In Fuller Russell's posthumous sale (18 April 1885, lot 126) the provenance-trail is made explicit:

“Exhibited at the Burlington Fine Arts Club, 1874; and at the Royal Academy Exhibition of Old Masters, 1879. From the Ottley Collection”

Thus, despite the fact that a miniature from 15th-century Venice is repeatedly attributed to a 14th-century Florentine school, it is possible, by following the provenance-trail -- rather like stepping-stones across a stream -- to get safely from 1838 to the present day.