In preparation for a manuscripts safari this summer, I am combing through online library catalogues of collections in New York state for manuscripts of interest. The Rush Rhees Library of the University of Rochester has an online handlist of its medieval and early modern manuscripts, for example, and one that particularly caught my eye is this: 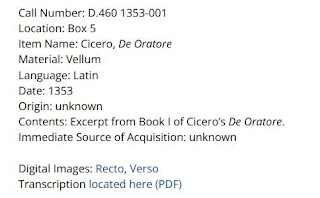 The precise date "1353", suggests that the cataloguer knew something about the parent manuscript, and reminded me of Otto Ege's Dominican Missal dated 1353. As luck would have it, this is one of only two medieval manuscripts for which images are available online, so I was able to have a look; a whole-page view is shown above.
In the lower right corner of the recto is an inscription, interesting for at least two reasons:

First, the inscription gives us considerable information about the origin of the leaf: "from Cicero de Oratore 'scriptus per me Gherardum Johannis del Ciriagio MCCCCLIII'". And second, it is written in the distinctive handwriting of Sydney Cockerell [Wikpiedia].
With these two pieces of information, I could quickly find out quite a lot about the background to this leaf. One of the first hits using a simple Google search is to an entry in The Eric George Millar Bequest of Manuscripts and Drawings, 1967: A Commemorative Volume (London, 1968), which I quote at length:

"The script of humanism is represented by two items in the Millar Bequest, the present one and the next. Although the first is only a fragment [i.e. single leaf], it has the advantage over the second that its writer is known. He was Gherardo del Ciriagio, the leading Florentine scribe in the third quarter of the fifteenth century [...] The major part of the Cicero from which the present leaf is taken is now in the collection of Mr. B. S. Cron and bears the date 1453. The ‘complete’ manuscript—it actually lacked three leaves already—was purchased by Sir Sydney Cockerell at the sale of the library of Samuel Allen, of Lisconnan, Antrim, at Sotheby’s on 30 January 1920 (lot 42), for £10 15s. Previously it had been lot 1238 in Sotheby’s sale of 18 June 1866 and item 35747 in Messrs. B. Quaritch’s catalogue 369 of September that year. Cockerell had the manuscript rebound, but before doing so gave thirteen damaged or mutilated leaves to friends. Those that can be traced are one given to Graily Hewitt, now in the possession of Mr. Alfred Fairbank, a second in the library of the Society of Scribes and Illuminators, to which it was presented by Madelyn Walker, and the present one, which was given to St. John Hornby. It seems not unlikely that it came into the Millar collection as a gift from Hornby. It is fol. 5 of the first of the original fourteen gatherings in the book and contains chapters 26—33 of Book I of De Oratore. There is no decoration on the two pages, which each have twenty-six lines of writing on them. There are four corrections to the text, two, in the same hand as the text, being above lines, and the other two, in a more cursive script, being in the margins. All appear to be by Gherardo."

A footnote refers to B. L. Ullman, The Origin and Development of Humanistic Script, Storia e Letteratura: Raccolta di Studi e Testi, 79 (Rome, 1960), pp. 112-13, which provides a bit more information, including the full colophon "Scriptus autem fuit per me Gherardum Iohannis del Ciriagio civem et notarium Florentinum MCCCCLIII"; a record of the original collation, "thirteen signatures of ten leaves and one of eight"; and a list of the leaves that were missing from the rebound parent volume: leaves 2, 3, 5, 7, and 8 of quire I; leaf 9 of quire II; leaves 6 and 9 of quire IV; leaf 10 of quire VII; leaf 8 of quire X; leaf 8 of quire XI; leaves 1, 4, and 5 of quire XII; and the blank leaves 7 and 8 of the last quire.

Ullman lists the same three leaves as in the Millar Bequest volume, viz:

The Millar Bequest volume and Ullman both state that Cockerell extracted 13 leaves, but in his list of Cockerell manuscripts (British Library Journal, 1987, p. 205 no. 86), Christopher de Hamel says there were 14 (I do not know which number is correct):

When de Hamel published his article the manuscript was "Now London, private collection", i.e. Brian Cron, of Kew. In Cron's Handlist of Western Manuscripts (privately printed, 1965), he records that Cockerell had had it bound by his favourite binder, Katharine Adams [Wikipedia]. In accordance with his wishes, Cron's manuscripts were sold after his death in 2002 by Bernard Quaritch Ltd, and Richard Linenthal (to whom I am very grateful for a copy of his text) of that firm gave a talk in Cambridge in July 2005 in which he recorded that the Cicero had been sold to an English private collector.
I would be glad to learn from readers of the whereabouts of the single leaves. St John Hornby apparently had a second leaf from Cockerell, and bound it at the front of a volume of Cicero's Tusculan Disputations, sold in the Foyle sale at Christie's in 2000 (lot 81). Another is apparently at the Walters Art Museum (part of MS W.785)
The leaf now at Rochester was presumably given by Cockerell to one of his friends; it would be interesting to know which one.

UPDATE, 29 May 2022: Bill Stoneman has been in touch and kindly sent me scans of Sydney Cockerell's 1951 article, in which he reproduces the illuminated initial at the beginning of Book II of the text, and the colophon at the end: 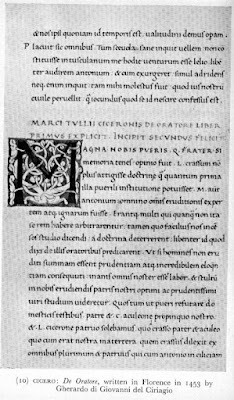 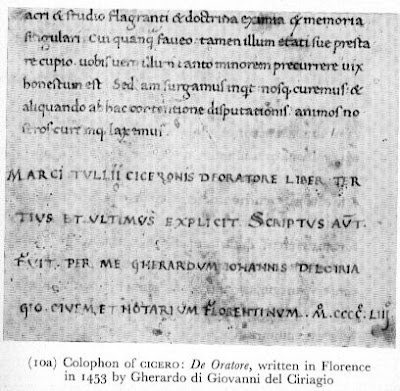