I have mentioned at least twice before the potential importance of distinguishing between the first day of a multi-day auction (which is how people usually cite auctions), and the day on which a particular manuscript was actually sold, as the latter could be several weeks later. One situation in which we may need to know the day on which a manuscript sold, is when we are trying to find references to it in things like personal diaries and journals, or newspaper reports.

Many people are aware of the value of Sydney Cockerell's diaries (now at the BL) for finding out about auctions of the first half of the 20th century, but it seems that too few people use the journals of Frederic Madden for information about 19th-centuy sales.

Frederic Madden (1801-1873) [Wikipedia] kept a journal from 1819 to 1872, thus including the whole period when he was Keeper of Manuscripts at the British Museum, from 1837 to 1866. At his death he left it to the Bodleian Library [catalogue record] (presumably because it contains so much criticism of the British Museum and its Library) with instructions that it should not be opened until 1 January 1920.

The handwriting takes some getting used to, and the Journals can be hard to navigate, because the entries run in an unbroken series, with no gaps between one month and the next, no running headers, and certainly no indexes. If you want to find something specific, you therefore generally need to know a fairly precise date, and then locate the appropriate point by turning the pages until you reach the beginning of a month, where you will find the month identified. (All other entries are just introduced as "Tuesday 29th", "Wednesday 30th" etc.): 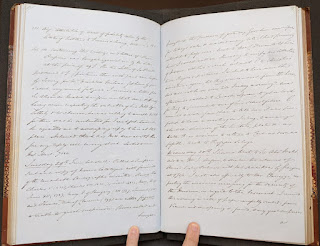 If you are looking for information about a particular auction, you need to know when the sale started, and read the entries for a few weeks prior, because Madden may have gone to examine the manuscripts well in advance, and recorded his first impressions. You also need to know the date on which a particular manuscript sold, in case he attended the sale and says anything about it. Finally, you need to read the following couple of weeks' entries, because he might say something about his purchases after they are delivered to the Library. 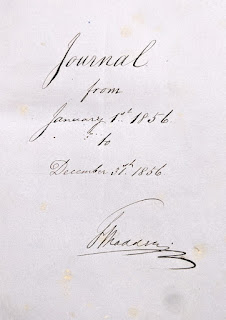 To give an example, we may look at the case of the auction of the property of Samuel Rogers, which took place on 28 April 1856 and eighteen following days (sales were held on consecutive weekdays and Saturdays, but not Sundays); the manuscript illuminations were not sold until the eighth day, Tuesday 6 May. I will quote selectively from the Journal, and add a few explanations after some entries.

"At three o'clock I went to Christie’s to their private view of the late Mr Rogers’s pictures and antiquities. There were many objects of general interest, which will, no doubt, produce high prices. The room was crowded & I met here Mr & Mrs Bond, who afterwards accompanied me to Mr Rogers’s residence in St James’s Place, to look at the illuminated miniatures & borders, the whole of which, apparently, were obtained at the sale of the Late W. Y. Ottley’s Collection in 1838."

Rogers’s house at St James’s Place was just a couple of minutes’ walk from Christie’s at King Street: 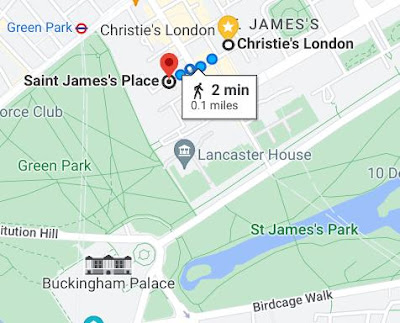 "Among them those executed by Apollonio de’ Bonfratelli for Pope Pius IV. are the finest. I shall speak of them again after the sale. A diploma of Lodovico Maria, Duke of Milan, dated 1494, is also beautifully ornamented with an exquisite arabesque border, and portraits of Duke and his Duchess, Beatrice d'Este."

"This document is specially noticed by Waagen when in Ottley's possession, & supposed to have been executed by Girolamo, the finest miniature painter in Milan. Lot 1011 is a fair Book of Hours of Flemish art, with a coat of arms of Lorraine, executed ater 1500. Lot 1015 is another Book of Hours executed in France about 1430, and written apparently by the same hand as the Hours of Henry VI. MS. Cotton. Domit. XVII. [...]"

"At two o’clock out with E. to Christie’s to see Rogers’s pictures. I wished to have seen the miniatures again, but they are removed from the house, and will not be on view till Friday morning."

"At two o’clock walked with E. to Christie’s rooms, in order to look at the miniatures of Rogers’s collection again, but the Great Room was so crowded that there was no possibility even of entering it, and therefore we were only able to see the portion in portfolios, in the lower room. Made notes as to the value of the lots, to enable me to give instructions to Boone with more certainty."

The Great Room is still the main saleroom at Christie’s: 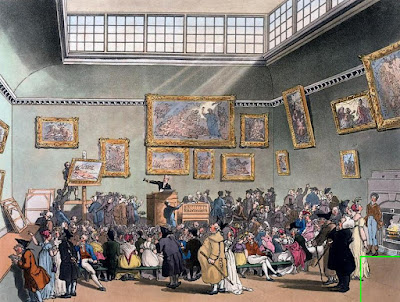 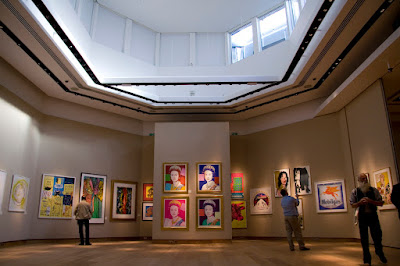 "Out at ½ past ten and again paid a visit to Christie’s & made notes of the framed miniatures. Afterwards called at Boone's, and enquired respecting the sale at Randalls Park, for which I left a few very limited commissions. [...] Wrote also to Mr Carpenter, to inform him that I meant to bid for the best lots of miniatures at Rogers’s sale. He wrote me a reply, to say that having heard, I had objected to his buying, he had withdrawn his commissions, but still, thinking it "imperative" on him to procure such specimens of art, it was his intention to purchase them, when offered privately to him. I am sorry he should take so mistaken a view of the scope of his department. The effect might also be very injurious, for Colnaghi, for instance, might bid against Boone (my agent) at a sale, carry off a miniature at a higher price than I had authorized to be given, & then bring it to Mr. Carpenter, & sell it to him!"

Earlier entries in the Journal record that Madden was annoyed that W.H. Carpenter, Keeper of the Department of Prints and Drawings, had intended to bid at the Rogers’ sale to acquire representative examples of illuminated manuscripts for his own Department.

"Boone called for his commissions at Rogers’s sale, and at two o’clock I went myself to Christie's to watch the result of the sale. I was prepared for high prices, but I confess, most of the lots went for sums far beyond what I had anticipated. A list is here subjoined of the lots that were of interest to me, but of these I had only given commissions for the following Nos. 981, 993, 1001, 1004 [to] 1011, 1014, 1016.

As alluded to by Madden in previous Journal extracts, William Boone was his agent for buying manuscripts at auction.

Madden then provides a list of lots, their buyers and prices, and occasional additional insights. For example:

In the case of the Fouquet (discussed a few weeks ago, here), we can see that Madden had given Boone a maximum bid of 12 guineas (£12 12s.), but that the Marquis of Breadalbane and at least one other bidder were willing to pay about 30% more.

"1003. One more frontispiece from a Ducale, which was passed & joined on to the next lot.

These ought to have been mine, but Boone not attending to the biddings, and thinking that the lot only 1003 was in question, did not bid, and Mr Whitehead carried off the two lots at a very moderate price, for the Government School of Design."

'Whitehead' is Thomas Miller Whitehead, whom we have encountered several times before.

Madden was aware of the prices that illuminations had fetched in the 1838 Ottley sale; his copy of the catalogue, annotated with the prices and names of buyers, is at the BL. He also entered in it references to the Rogers sale, apparently some decades later.

This is also a case where Boone made a mistake and failed to execute Madden’s bids properly, allowing two lots to go instead to the "Government School of Design", later to become the V&A Museum; these two lots are these:

I hope the example of the Rogers sale gives some idea about how much extra provenance context can be provided by Madden's Journals.