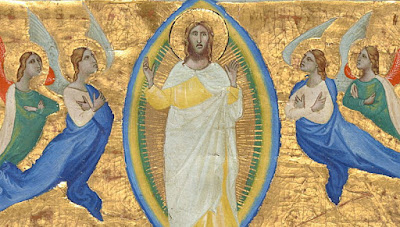 It goes without saying that in order to trace the provenance of a manuscript (whether it be a codex, leaf, or cutting) from an auction to its subsequent owners, you need to identify who bought it at the auction. First, you usually need to find an annotated copy of the catalogue; then you need to be able to read the name of the buyer. If you are lucky, it will be a well-known and very distictive name, such as the dealers Quaritch, Dobell, or Colnaghi; or a collector like Cockerell, Riches, or Korner, each of whom is fairly easy to pursue further. Sometimes the name is only semi-legible or it is very common (Smith, Jones, etc.). Sometimes it is legible and reasonably uncommon, but unfamiliar; in this post I'll consider one such example.

The first of these appears among a group of lots, many of which have the "B.F." initials of the so-called Master B.F.:

86 One—The Madonna, Child and St. Ann, with Landscape background, a most elegant composition, not unworthy of Leonardo da Vinci

The comparison of the composition with Leonardo suggests that it may look somewhat like his version of  The Virgin and Child with Saint Anne, with the Virgin sitting on Anne's lap: 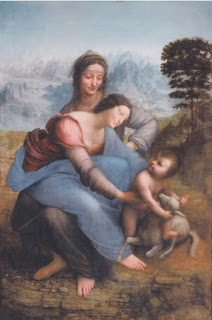 The second lot occurs among a group of four lots (lots 177-180) of which the three others are all from the Laudario of Sant'Agnese, which again gives us a good clue as to what it looks like:

179 The Ascension, richly gilt, in a border, supposed to be painted by Giotto

In fact, in 1937 de Ricci identified this as a Laudario leaf that was then in the Lehman Collection, and is now at the Getty Museum (of which a detail is shown at the top of this page):

The Getty's online record includes the purchase by Dawkins at the Ottley sale, but then has a gap of more than a century until 1951:

During a period of Covid-related lockdown last year when I was trawling digitized auction catalogues, I found the sale of the Catalogue of the Valuable Effects of Miss Caroline Anna Colyear Dawkins, Deceased, sold by Christie's at her house on Lower Road, Richmond, on 18 January 1858, and following days: 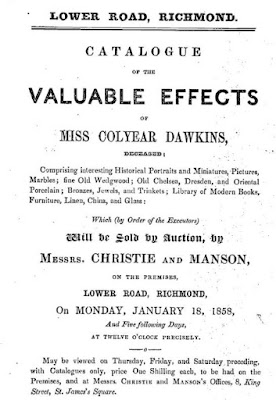 The catalogue includes two lots that correspond to those bought at the Ottley sale by "Dawkins"; the first is this:

Although this miniature is described as "Christ appearing to the Disciples" -- instead of the Ottley catalogue's correct identification as the Ascension -- the fact that both catalogues attribute it to Giotto, the fact that the Dawkin's catalogue explicitly says it comes from the Ottley collection, and the fact that Dawkins only bought two lots at the Ottley sale, makes the identification certain.
James Colyear Dawkins (1760–1843) was an MP and landowner; his only son predeceased him in 1821, at which point he devised all his disposable real and personal property to his unmarried daughter, Caroline Anna Colyear Dawkins, who died on 19 Sept. 1857. She may have inherited the leaf from her father.
Thus we have filled a twenty-year gap, 1838 to 1858, in the provenance. Unfortunately, the buyer at the Dawkins sale was called "Smith, B.S."(?) and I have not yet identified him/her:

Further trawling, however, led to another sale catalogue from about 60 years later. Despite the title "The Resurrection", and the misdating of the leaf more than a century too late, the description is so close that I am confident that it was owned by W. Fuller Maitland (1844–1932) [Wikipedia], and sold at Christie’s, 14 July 1922, lot 49: 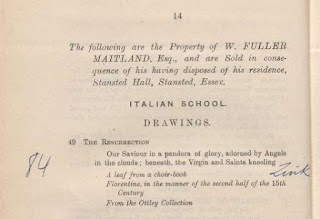 “Our Saviour in a pandora [recte madorla] of glory, adorned by Angels in the clouds; beneath, the Virgin and Saints kneeling. A leaf from a choir-book. Florentine, in the manner of the second half of the 15th Century. From the Ottley Collection”

Here the buyer appears to have been "Zink", such an unusual name that he ought to be very easy to identify, but so far I have failed, and I suspect that I am misreading the name. (Or was he perhaps an ancestor of Fritz Zink, author of Die Handzeichnungen bis zur Mitte des 16. Jahrhunderts?)

As for the other Ottley-Dawkins lot, described as "The Madonna, Child and St. Ann, with Landscape back-ground, a most elegant composition, not unworthy of Leonardo da Vinci" in the Ottley sale, it was described in the Dawkins sale as follows:

“336    J. Clovio–A capital letter O, from a missal, with the Virgin and Child seated in the lap of St. Anne, in brilliant colours, on gold ground, on vellum, in gilt frame”

Hopefully this person will be identified in due course. Based on the subject matter, high value (it sold for £5 in 1838 and £10 10s in 1858), and the comparison of the composition with Leonardo, I suspect it may be this cutting:
We know that Charles Brinsley Marlay [Wikipedia] owned it by 1886, when he lent it for exhibition at the Burlington Fine Arts Club:

So, having identified "Dawkins", what have we learned? Arguably, not very much! But provenance research of this sort is cumulative: each individual identification of an item in a sale catalogue is like a single piece in a large jigsaw: it is rare that any single piece makes a very significant difference to the overal picture: it is the compound effect of many single pieces that eventaully add up to a new and clearer way of seeing the "big picture".
Posted by Peter Kidd at 18:14