I went to Birmingham last week to see the Crivelli exhibition. While in the city, I also went to The Barber Institute (to look at paintings, not manuscripts such as the Liberale da Verona cutting mentioned at the end of this post), and the University Library (because they have a very good set of Folio Society Collectors' Corner catalogues, some of which I have not been able to consult anywhere else), and the Cadbury Research Centre (Special Collections), which holds a large collection of little-known fragments. (And I do mean fragments, not cuttings and leaves).

As usual, in my experience, about 90% of the fragments were unintersting to me (Canon Law, Sermons, Use of Sarum liturgica, etc.), but 9% are interesting and 1% are very interesting. One of the two or three items that comprise the 1% is an unrecorded portion of a copy of Ranulf Higden's Polychronicon  Wikipedia], of which a detail is shown above.[1]

The surviving portion consists of just four paper leaves. I was trying to look at a lot of material in about two hours, so I did not take proper measurements, look for watermarks, etc., but I did place a ruler next to the leaves which gives a general sense of scale; they are approximately 30cm tall: 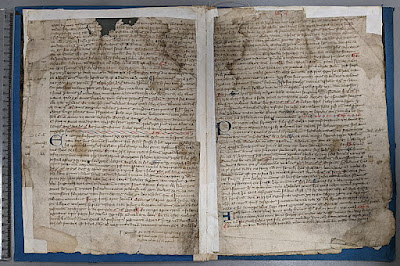 I will leave its text to someone else to investigate [2] (I think it might make a good MA dissertation subject, for example) and concentrate on its rather meagre provenance evidence.
The most obvious pieces of evidence are a characteristic printed label on the spine of the typical Phillipps binding, with Phillipps's number "18606", and an equivalent inscription at the foot of the first page: 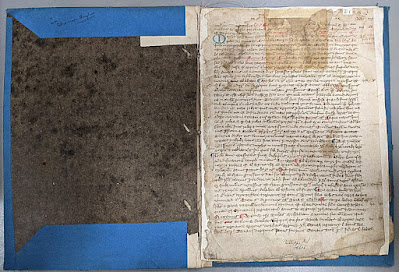 With this Phillipps number we can easily find the manuscript in Sir Thomas Phillipps's own printed catalogue, where it is described as a "Chronicle of Brute" [Wikipedia]:

This identification of the text appears also to have been written on the spine, with "of BRUTE" still just about legible:

Unfortunately we cannot take the provenance back before Phillipps, because it appears as part of a group of manuscripts under a generic heading of "Ex Bibl. Miscellaneis":

This group (MSS 18576-18747) appears between manuscripts acquired in 1861-62 (MSS 18028-18030) and 1866 (MS 18748), which is a clue to the date of Phillipps's acquisition, but unfortunately an unreliable one, as his manuscripts were sometimes not catalogued until decades after their acquisition.
Working in the other direction, we can use the Schoenberg database to find that the manuscript was offered for sale in the Phillipps sale on 5 June 1899, lot 362 [SDBM_38025].
There is a circular paper label in the lower left corner of the front cover, inscribed "217"; its form and position suggests that it is an auction lot number: 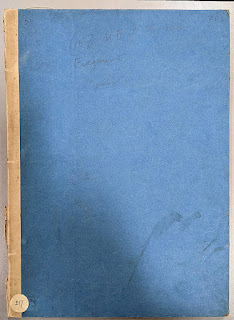 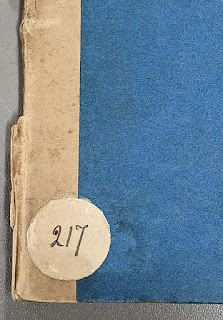 By searching on the lot number in combination with "Brut", "Brute" , "chronicle", etc., as possible title-words, we can find the manuscript in the Schoenberg database as having been sold in another Phillipps sale on 24 April 1911, lot 217 [SDBM_12779]. This suggests that it was unsold at the 1899 sale. [I am currently in Germany, and unable to check the auction record].
According to the Schoenberg database the manuscript was bought by the bookseller P.M. Barnard for 5 shillings. I have not yet attempted to independently verify this, but it seems highly plausible, as the box of fragments at Birmingham includes a letter from Barnard, dated a decade later, offering to sell a collection of fragments to Dr Richard Hingston Fox (1853-1924) [Brief biography]:
An ambiguous inscription on the box in which the fragments are now housed seems to suggest that they were donated by Hingston Fox to J. Rendel Harris (1852-1941) [Wikipedia], who in turn gave them (along with other manuscripts and fragments) to the University:

[1] Lists of the known manuscripts can be found in:

I am grateful to James Freeman for confirming that the Birmingham leaves are hitherto unrecorded.