The Lehman Archive at The Met Museum


On my trip to the US before Christmas I spent a couple of days at the Watson Library of The Met Museum. My primarly purpose was to work through the files of the archive of Robert Lehman (1891-1969) [Wikipedia] relating to his collection of illuminations.

Most of the items in the collection were acquired in just a five-year span, from 1924 to 1929, with only a few acquired later (such as the Jean Fouquet miniature from the Hours of Etienne Chevalier, which appeared at auction in 1946). The bulk of the collection was therefore formed in time to be included in de Ricci's Census of manuscripts in North American collections (vol. II, 1937, pp. 1702-18).

The collection came to be divided into two parts. One was bequeathed to The Met, of which a catalogue was published in 1997:

The other was apparently left by Robert to his son Robin (b. 1936) [Wikipedia], who left it on deposit at The Met until 2004 whe they were withdrawn and sold; most of these items were included in a 2003 exhibition catalogue, which is notably silent about the name of the owner and their whereabouts:

All three catalogues (1937, 1997, and 2003) arrange their contents geographically and/or chronologically.

As de Ricci states, "The classification of this list is chronological; the prefixed numbers refer to Mr. Lehman's photographs of his miniatures." The first several items described by de Ricci are therefore prefixed with non-consecutive alphanumeric references as follows: "A. 1 a-d", C. 32", "D.6", "D.14", "C.14", and "D. 28", with no apparent rhyme or reason. Even more confusingly, many entries have no prefixed number, and have instead an ellipsis "...":

This caused confusion even to Pia Palladino, who was an Assistant Curator of the Robert Lehman Collection and had access to the archive: she recorded this leaf as de Ricci's "C.11", apparently believing that it belonged under the same prefix as the preceding item. But to understand these alphanumeric references, which de Ricci stated "refer to Mr. Lehman's photographs of his miniatures", we need to consult the Archive.

It is apparent that Robert Lehman kept notes and photographs of his illuminations in four folders. They have been disassembled and are now stored in several modern archival boxes, but their previous appearance can be reconstructed. 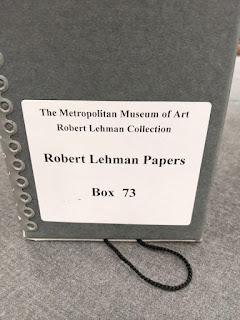 The boxes contain photographs stuck to sheets of card, with three holes for a ring-binder at the right edge (thus the photos were mounted as versos): 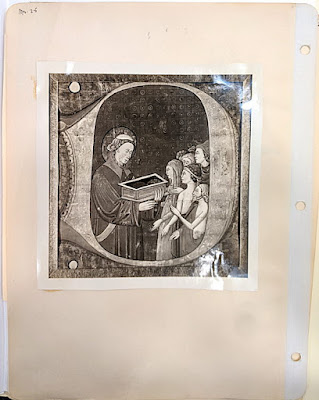 Each item also has a brief typescript description on a sheet with holes at the left edge; therefore we can assume that the photos and descriptions of each item were arranged so that they faced one another: 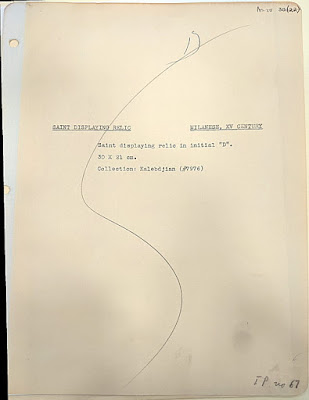 The descriptions and photos usually have various numbers in their upper outer corners, presumably reflecting various different attempts to make inventories, each superseding the previous ones: 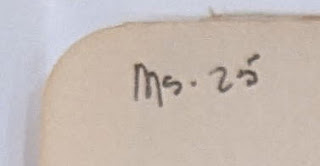 The oldest system seems to represent an arrangement in four ring-binders (or "Books"), numbered I-IV: 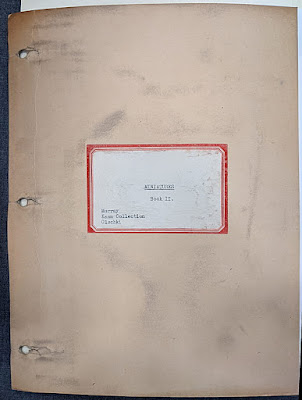 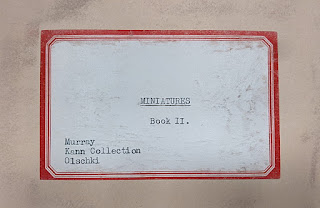 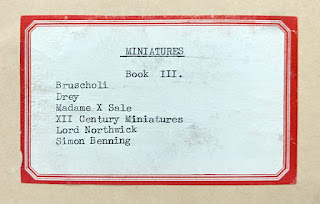 These labels show that the contents are primarily grouped according to Lehman's sources, not by geographical or chronological criteria. Inscriptions on the backs of photos show that Book I = "A" photos, Book II = "B" photos, etc. Thus the cutting recorded as "C.11" by de Ricci in the image above was item 11 in Book III, and, as he records, it is known to have come from the Madame Fould auction in Paris in 1926 (on which see this post): 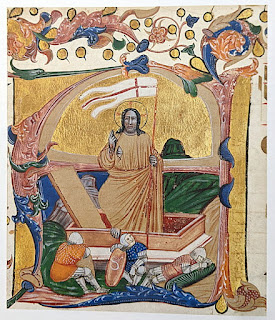 If one tabulates in a spreadsheet the various numbers in the Archive, a much clearer pattern emerges about when and where Lehman acquired the items that formed his collection. Almost every item from Book I, with the "A" prefix (more than 50 leaves and cuttings), was bought fron Kalebdijan in Paris in 1924, for example. Most items prefixed "B" came from John Murray (cf. this post), the Edouard Kann collection (cf. this post), or Leo Olschki (cf. this post); and so on.

One last example. A cutting was recorded by de Ricci as "C.14", with no provenance:

It is now the Art Insititue, Chicago: 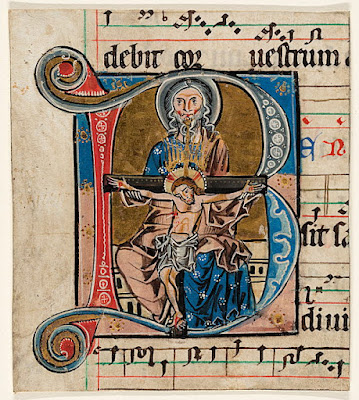 There was still no pre-Lehman provenance known when it was catalogued for a recent exhibition (Christopher de Hamel and Matthew J. Westerby, The Medieval World at Our Fingertips (London and Turnhout, 2018), no. 2). But all the other items numbered from C.10 to C.16 in the Lehman collection were in the 1926 Madame Fould auction, and with this strong clue it is not difficult to find the above Trinity cutting in that catalogue as well, as lot 2: