A Rediscovered Border from the Murano Gradual

A couple of years ago, trawling the Fragmentarium website for illuminated manuscripts, I encountered this group of cuttings of medieval borders, attached to a page from a 19th- or early-20th-century album:


The reverse of the sheet has 1916 accession numbers, and de Ricci, Census, p. 1050, records that it was part of a group given the Fogg Art Museum by William Augustus White (d. 1927) in that year. [1] It was later transferred to the Houghton Library.

Ignoring the three smallest pieces in the upper left and middle of the page, my eye was especially caught by the large border that occupies the right-hand side and lower part of this page. It really is large: 40×23cm. according to the online description -- so it is presumably from a huge choirbook. [2]

As far as I can tell from the available image, the Houghton border is made up of three separate pieces, joined together with a couple of visible breaks along the lower part:

Close-up, you can see the join between the main, largest, section (on the right in the images above and below), and the second piece (to its left): 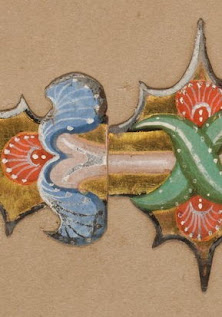 Despite a slight disjuncture, it seems that these two pieces belong together, and that only a small piece -- perhaps as little as a few mm. -- of the original border is missing between them.

The abrupt join of the second piece (on the right in the next image) to the third (on the left) piece is much more obvious: 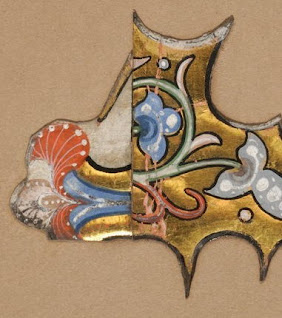 I can't put my finger on it, but something about the orientation of the border looks "wrong" to me: although it is possible that the wide part was always a left right margin (presumably the fore-edge of a recto), as it is oriented today, the design of the foliage looks more natural to me if laid on its side, re-oriented as a lower border, like this:

Something about the style, and especially the palette, of this border reminded me of the Murano Gradual initials (some of which are shown in this blogpost). I now find it impossible to put into words exactly what it is about this foliage that reminded me of them, but having looked through some images of the Murano Gradual initials, I found no good matches, and I passed the observation on to other people, and pursued my "discovery" no further. [3]

This week, however, I was looking at an image of the Fitzwilliam Museum's very large (305 × 320 mm) Murano Gradual cutting of the Dormition of the Virgin (of which a detail is at the top of this post) [4]: 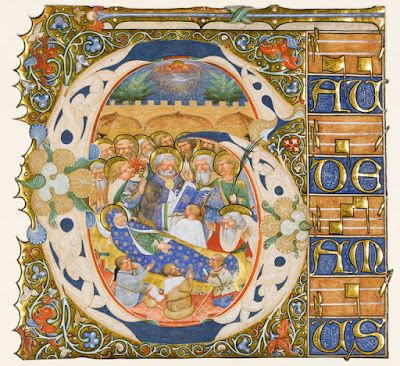 While looking at it, I had a sudden realisation: the point at which the bottom left edge of the Fitzwilliam cutting is cropped 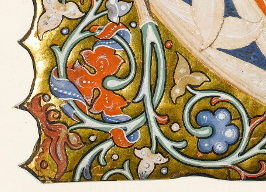 potentially matches the left edge of the middle piece of the Houghton border: 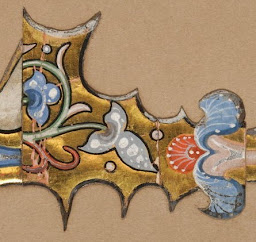 To test this hunch I trimmed the Houghton image to its joins, rotated it, and abutted it against the lower left edge of the Fitzwilliam cutting, to show that they do indeed fit together perfectly, like this:

Then I realised that the smallest Houghton piece, the extremity on the left in this image: 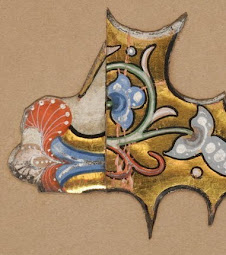 could be rotated 180 degrees and matched-up to the top right corner of the Fitzwilliam cutting: 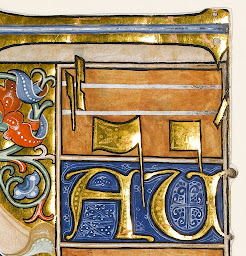 
I think that no one can doubt that the Houghton cutting comes from the same manuscript leaf as the Fitzwilliam cutting. As far as I am aware, this is the only such border known to survive from the Murano Gradual -- or, at least, the only one to have been recognised.

In a future post I will attempt to reconstruct the original appearance of the whole page from which it was cut.

[2] The online description also states that they come from the earlier collection of Robert Hoe (d. 1909) [Wikipedia], but does not say what the evidence is for this, and I cannot find these leaves in the catalogue of his sale of illuminated manuscripts in 1912.

Bill Stoneman kindly points me to the relevant entry in the Hoe sale catalogue, lot 2361:

[3] My interest in Italian illuminated cuttings has really only developed in the past year, so on finding the image of the Houghton cutting in March 2018 I sent it, in an email with the subject-line "Murano Gradual border?", to Bryan Keene and Stephanie Azzarello, whom I knew to be working on the artist. They both enthusiastically agreed with my suggestion, and subsequently included it in a list of Murano Master cuttings and leaves at the end of their article ‘Uno splendido enigma: Il Maestro del Graduale di Murano’, Alumina, 64, 2019, 14–21. Going back to the email exchange, after writing this blogpost, I find that Bryan did in fact respond by suggesting that the Houghton border I had sent was comparable specifically to the Murano Master's Berlin gradual (generally believed to be a companion (Temporale) volume of the dismembered (Sanctorale) volume -- both with illuminations by the Murano Master), and also to the Fitzwilliam cutting. Neither they nor I followed up these leads, however, until this week -- little realising how close Bryan had come to making the connections that I can demonstrate today.

[4] For a recent, detailed, analysis of the Fitzwilliam Museum cutting, see Stella Panayotova in The Cambridge Illuminations: Ten Centuries of Book Production in the Medieval West, ed. by Paul Binski and Stella Panayotova (London: Harvey Miller, 2005), no. 60 pp. 150-52.