Many of my blogposts start as very small questions or observations, which might be easy to ignore, but that become more interesting as I pursue them, often leading in unexpected directions. Today's post is an example of this.

I am attempting to trace the provenance and present whereabouts of as many lots as possible from the Holford sale in 1927. Looking through the Italian volumes of the Illuminated Manuscripts in Cambridge catalogue this week, I found one that I had previously overlooked, now at the Fitzwilliam. Its reported provenance led me to "meet" Felix Joubert for the first time. 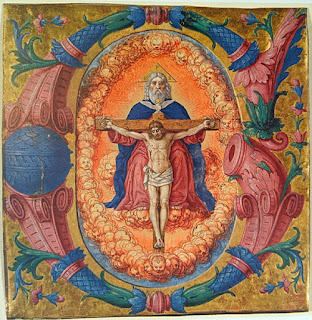 The provenance of Fitzwilliam Museum, MS 378, shown above, a cutting with The Trinity in an initial "G", attributed to Girolomo dai Libri, is given as follows (emphasis added):

While it is certainly possible that a cutting from the 1838 Ottley sale entered a 19th-century French collection, this would be a very surprising provenance for a cutting that was later in the Holford collection. As we have seen in previous posts, the other Holford cuttings came from one of two sources:

If the Fitzwilliam cutting entered the Holford collection from a different source, I wanted to find out more about it.

The Fitzwilliam cataloguer had apparently, understandably enough, assumed that 'Joubert' was French, and thus the collector who had his cutting framed by Joubert was also French. A bit of Googling using "Joubert" in combination with other search-terms like "frame", "picture-framer", "encadrement", and "encadreur" produced very few promising hits, except for one article:

In footnotes 15 and 17 the authors suggest that Joseph Duveen, the art dealer [Wikipedia], had picture-frames in 18th-century French style made by a man or a firm called Joubert in the late 1920s. So perhaps this was the same firm that framed the Fitzwilliam cutting in the 19th century?

But the fact that Duveen was using Joubert at almost exactly the same time that the Holford sale took place, led me to question whether the Fitzwilliam Joubert frame (which I have no seen) is more likely to date from shortly after the Holford sale, and not from the 19th century?

Further Googling, including the helpfully-uncommon name "Duveen" as a search-term, led me to believe that despite his French-sounding name, Joubert was actually an English-born art and antiques restorer in the King's Road, Chelsea, London. Felix Joubert was a truly exceptional sculptor and craftsman, able to work in a wide variety of media; Alfred de Rothschild, one of his clients, is said to have described him as "the modern Benevenuto Cellini" [Wikipedia]. After his death, his talents were summarised in The Times (21 May 1977) as follows: 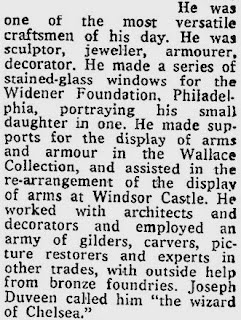 As suggested here, he had a particular interest, and expertise, in old arms and armour, which may have stemmed from his talent at fencing -- he competed internationally, and was in the British squad for the 1912 Olympics.

Arms and armour, and other metalwork, form the subject of the next part of our story. If, like me, you enjoy tales about fakes and forgeries, and how they came to be unmasked, I recommend:

Claude Blair, ‘Crediton: The Story of Two Helmets’, in Studies in European Arms and Armor: The C. Otto Von Kienbusch Collection in the Philadelphia Museum of Art (Philadelphia, 1992), pp. 152-83. [Archive.org]

It tells the story of how a mid-16th-century steel helmet, which belonged to the parish church in Crediton, Devon, was swapped for a forgery by an unscrupulous dealer c.1911. (He sold in 1927 to William Randolph Hearst, who re-sold it in 1941; it is now in the Philadelphia Museum of Art). "From a purely technical viewpoint", Blair states, the copy "is in no way inferior to the original", and in considering who would have been able to make such an accomplished copy, he continues,

"There was, however, one extraordinary craftsman working in London in 1910 who would certainly have been capable of making the helmet and is known to have made fakes of all kinds. This was Felix Joubert (1872-1953) ... . Joubert's most celebrated fake was the fourteenth-century silver and enameled head reliquary of Saint Martin, from the church of Soudeilles (Corrèze), France, which was sold clandestinely and illegally by the parish priest to J. Pierpont Morgan via Duveen Brothers, a condition of the sale being that a substitute copy be provided for the church. James Henry Duveen tells how this copy was made so skillfully by Joubert that it could not be distinguished from the original, and that, as a result of a joke, the two became confused, so that it was uncertain which was which"

This sounds exceptionally like the situation of the 13th-century head-reliquary from St-Yrieix-les-Perche, near Limoges, which is now at The Met, having been sold by Duveen Brothers to Pierpont Morgan in 1907:

The image above shows the original; I think we can hazard a safe guess about who made the copy that was substituted for it in the church from which it was illicitly removed.

The article in The Times, of which an extract is shown above, begins like this:

Although I have not discussed medieval manuscripts in any detail today, I hope this post will serve as a reminder that part of the interest of provenance research is that it involves finding out about human individuals -- many of them absolutely fascinating -- whose lives have intersected with the inanimate objects we now study.

In the next post I will show that Felix Joubert also seems to have collected medieval illuminations, and discuss a few of them.