Six months ago I speculated about the identity of the owner of a group of Italian illuminated cuttings sold at a previously-unremarked sale at Sotheby's in 1821, suggesting "that it was either (i) someone who had bought the cuttings from Celotti, or (ii) Celotti himself", giving reasons for preferring the second possibility.

A significant number of those lots were bought by Ottley, yet re-appeared four years later in the famous sale of Celotti's illuminations at Christie's; I therefore suggested that Ottley and Celotti were acting in partnership to ensure that lots achieved respectable prices.

More recently I looked at the question of who actually owned the illuminations at the 1825 "Celotti" sale, and concluded that it probably was Celotti -- rather than Ottley as Christopher de Hamel has suggested.

This week I will reconsider the question of who consigned the illuminations for sale in 1821.

As regular readers will know, I care about the words we use to describe things. It may therefore be worth discussing a few terms that are used when referring to auctions, which are sometimes misunderstood or misused. A person who consigns property for sale by auction may be called the "consignor" or "vendor". "Consignor" is preferable because it avoids ambiguity: arguably it is the auction-house that actually sells the item, and should therefore (strictly speaking) be considered to be the vendor.

The consignor of an item is not necessarily its owner, however. If someone consigns for sale something that they have stolen, for example, they are not the "owner" in the eyes of the law. And property will often be consigned for sale by a third party, who is not the owner: common examples are the executors of a deceased estate, or a dealer acting on behalf of a client. In other words, even if we discover the identity of an anonymous consignor, we might still not know the true identity of the owner.

My initial look at the 1821 sale was dependent on a copy of the sale catalogue annotated with the names of buyers and prices. This week I was able at last to visit the Bodleian to consult the microfilm of the master copy of the Sotheby catalogue; this of course has the buyers' names and prices, but it also has additional annotations of at least five other kinds.

First, the title-page suggests that the catalogue had a misprint, or more likely that the sale was postponed by one day, with the first day being moved from Thursday, 3 May, to Friday 4 May:

This means that the illuminations, sold on the fifth day of the sale, were sold on Wednesday 9 May, not Tuesday 8 May. This may seem like an insignificant and pedantic point (of a kind discussed in more detail in this post), but it could be crucial if we were attempting to use personal diaries or the acquisition registers of book dealers to trace the provenance of items bought and sold on particular dates.

Second, as is standard in the master copies of Sotheby catalogues, each page has a tally of the value of lots sold on each page, and a running total for the sale (or for parts of the sale, such as each day of a multi-day sale). In the next image, for example, in the middle of the upper margin of the left page we can see the total of the preceding pages: £126 3s; and below this the new total, including the last few lots of the third day of the sale: £130 13s. [1] Then, below the first few lots of the fourth day of the sale we have their total: £2 7s 6d, which is repeated in the middle of the upper margin of the next page, with the new running-total in the middle of the lower margin: £40 15s:

A third kind of annotation consists of reserve prices, in code; these remind the auctioneer that he cannot sell the relevant lot for less than the coded price. The vast majority of lots in the sale were sold without reserve, as usual, but most of the illuminated cuttings have a reserve price next to their lot number:
The Sotheby price-code used to be "Kindbrothe" [3] so, for example, lot 531 had a reserve of "K/i/" or £1 2s, lot 532 had a reserve of "N/" or 3s, lot 533 had a reserve of "I/" or 2s, and so on.
Two other kinds of annotation are especially significant. In the left margins next to the descriptions of illuminations sold on the fifth day of the sale is the name "Ottley", and next to the British topographical and historical prints sold on the sixth day is the name "Griffiths": 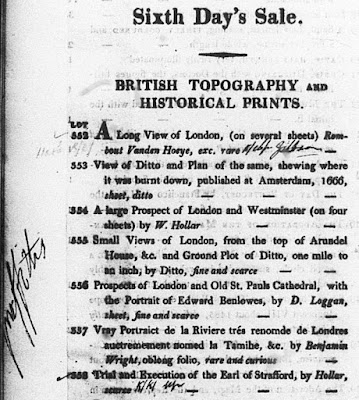 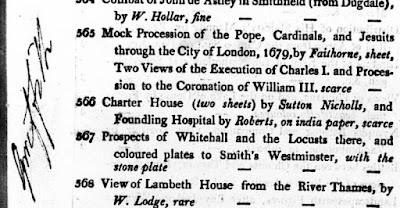 The implications of these becomes clear when we look at the flyleaf at the end of the catalogue. Although it is not very easy to read on the scanned microfilm, the annotations can be deciphered. First, there is a list of the totals of the bids on each of the six days sales: 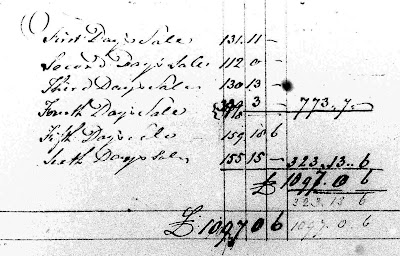 Below this is a table of five rows and five columns:

The first column has five names:

And the second column is headed "4th", suggesting that the middle three columns refer to the 4th, 5th, and 6th days of the sale, with the total sums in the final column.
The appearance of Griffiths's name in the column for the sixth day, as well as in the margin of the catalogue for the sixth day, suggests that he was the consignor of these items. Likewise for Ottley: he appears to have been the consignor of lots that sold for a total of £8 on the 4th day, and the group of illuminations that sold for £82 18s 6d on the fifth day (with other lots on the fifth day belonging to Steele and Molteno).
So, if I have interpreted these various annotations correctly, it seems that Ottley was the consignor of the 34 lots of "splendid illuminations from choral books" offered for sale in 1821. Whether he or Celotti was the owner is something I am still unsure about, as I will explain in a future post.

[2] Charles Sebag-Montefiore and Julia Armstrong-Totten, A Dynasty of Dealers: John Smith and Successors 1801-1924: A Study of the Art Market in Nineteenth-Century London (The Roxburghe Club, 2013), p. 449:

Molteno, James Anthony (1784-1845) briefly at no.20 Pall Mall, London.
J.A. Molteno inherited the business of his father, the print dealer Anthony Molteno (1751-1816), who originally came from Milan, and was briefly in partnership with Paul Colnaghi. The younger Molteno became a partner of Henry Graves, and their business was located at no.20 Pall Mall. However, they dissolved the partnership in 1835. On 16 September 1836, Molteno declared bankruptcy.

“In the Sotheby and Wheatley commission code the numbers one to ten are represented in sequence by the letters k i n d b r o t h e (presumably ‘kind brother’ without the duplicated letter r). The letter e preceding another letter represents the number one, and the letter e following another letter or between letters represents a zero. The letters are generally written in lower case, with upper case letters usually representing pounds. A slash is used to divide pounds, shillings, and pence. A nullity in one of the three monetary divisions is marked by a dash or a gap. Thus £1 can be represented as K/-/- or K// or K/, £1 1s. 0d. as K/K/- or K/K/ or K/K, and 6s. as either /r/- or the more usual r/-” (see Marc Vaulbert de Chantilly, “Property of a Distinguished Poisoner: Thomas Griffiths Wainewright and the Griffiths Family Library,” in Under the Hammer: Book Auctions Since the Seventeenth Century, edited by Robin Myers, Michael Harris, and Giles Mandelbrote [New Castle & London: Oak Knoll Press & British Library, 2001], p. 133, note 16).