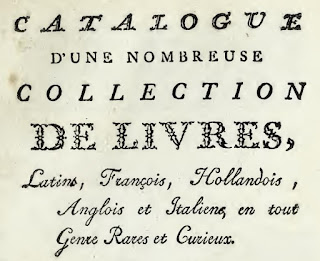 I have written before about the tendency of those who write about manuscripts (including me) to treat auctions and auction catalogues as interchangeable, and the inaccuracies this may cause. The Rupempré auction provides a good example.

The catalogue that I have referred to in the previous three posts states on the title-page that the sale would take place at Brussels on 22 July 1766, and following days:

But what if I had consulted a different version of the catalogue? This one: 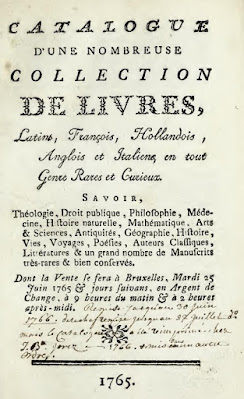 states that the sale of the same library was to take place more than a year earlier, on 25 June 1765 and following days:

This also seems straighforward. Apparently the sale was originally planned for June 1765, but was postponed for some reason, and held in July 1766.

But the Getty Research Institute's copy of the catalogue has an annotation by a contemporary hand recording that June 1765 sale was originally postponed June 1766, and then postponed again until 22 July of that year, with a new catalogue in which the losts were arranged in a different order: 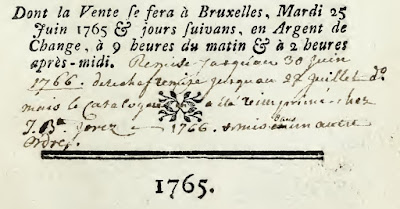 So, depending which copy of a catalogue you have access to, and what annotations (if any) it bears, you might believe that the sale took place in June 1765, or June 1766, or July 1766.

The vendor is not named in either of the catalogues, so to demonstrate that they do indeed describe the same collection, we may show that they contained the same manuscripts; I give here just two examples of many; first, the Malmesbury Bible:

second, a history from the Creation to the Apocalypse:

Another way in which people tend to confuse bibliographical entities (catalogues) with historical events (auctions) is when they make assumptions about whether an item was sold or not.

In the case of the Malmesbury Bible, annotated catalogues suggest that the Bible was sold for "150:-" guilders (? I am not sure what the local currency would have been in Brussels at this date), which was apparently a very significant sum, especially compared to the adjacent lots, which are marked with prices from ":18" to "13:-": 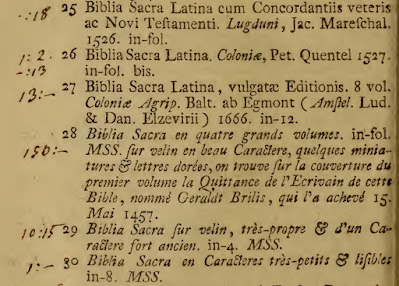 But, as Joseph Bernaer kindly informs me, that the Malmesbury Bible was in fact not sold at the auction; it did not reach its reserve price so it was retained by the vendor, and appears on a "Liste des livres qui ont été repris a cause qu'ils le vendoient trop bon marchez".

The opposite situation can occur: annotated copies of catalogues will record an item as "unsold" if it failed to sell during the course of the auction; but in such cases it is common for a dealer or collector to make a "post-sale offer" after the conclusion of the auction. Often a post-sale offer is made (via the auctioneer) and accepted (by the vendor) within hours of the end of an auction, but sometimes the offer or acceptance may occur weeks or months later. In such cases it might be accurate to say that the item was sold by auction (in the sense that the auction was the process by which the item was offered for sale, and the auctioneer was the person who effected the sale), but it might not be accurate so say that the item was not sold at the auction. These are subtle distinctions, but in provenance research small details of historical fact can have important implications.